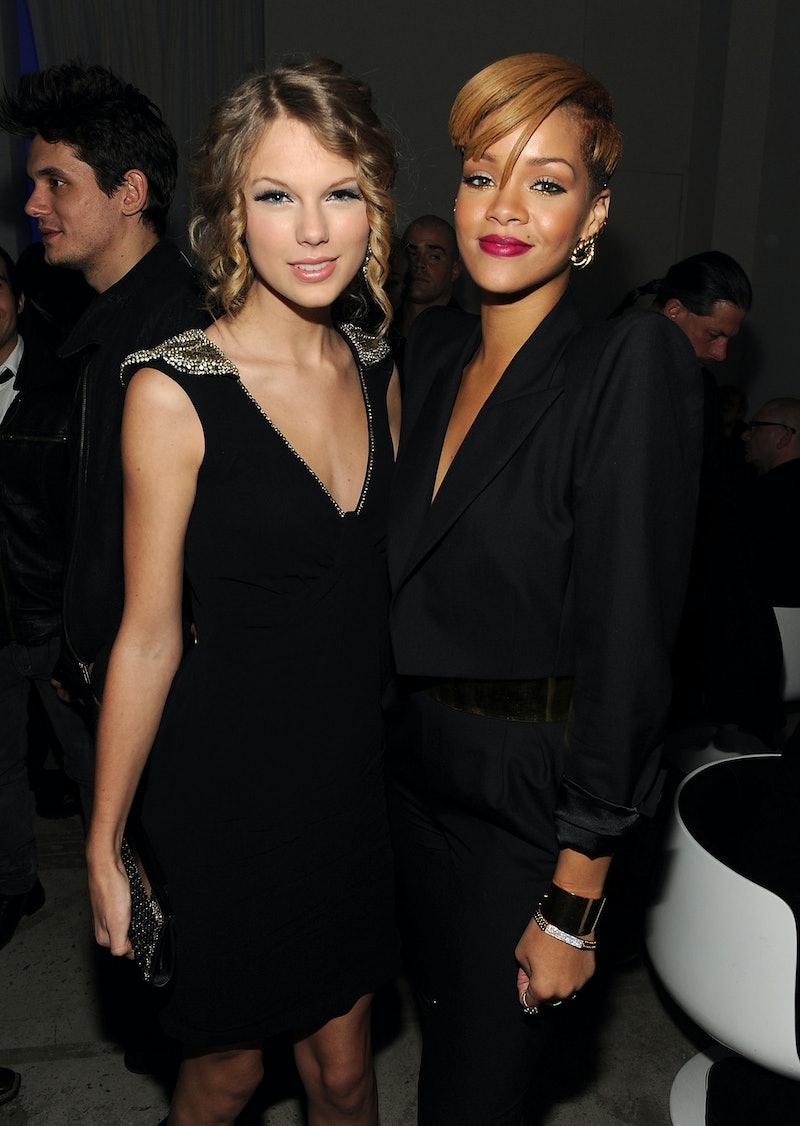 Sometimes I imagine Hollywood is just like a huge high school and everyone just naturally knows each other in some way or another. Over the years, there have been some really unlikely Hollywood friendships, because it is truly a place where anything can happen. After the bomb dropped that Taylor Swift co-wrote Calvin Harris' single "This Is What You Came For," I immediately wondered if Rihanna and Taylor Swift were friends, considering she was the vocalist on the song and a frequent collaborator with Harris over the years. Were they in the studio together? Did Swift send Rih the demo, too? I needed answers.

It turns out, while they might not be BFFs, there is a mutual respect for their respective careers and Rihanna and T. Swift have always been friendly with each other. In discussing the details of Rihanna and Swift's friendship, it is necessary to look back at some of the drama that might have marred their relationship over the years, which involved another musician. You see, it is just like high school! Anyone who is a pop culture fiend knows of one of the biggest pop feuds in recent history: Taylor Swift versus Katy Perry.

The story goes that Swift and Perry both were friendly, but in September 2014, Swift shared with Rolling Stone that "Bad Blood" is about a pop star she claimed hired her backup dancers. Perry then tweeted her infamous, "Watch out for the Regina George in sheep's clothing..." line. Then, people assumed Perry was the star in this story and that the tweet was about Swift, and a feud was born. A thing to remember here is that Perry and Rihanna are really good friends, so fans would assume that Rih would take Perry's side.

Thing is, Rihanna doesn't really like to get involved in other people's drama publicly, which is why she would easily be able to maintain a friendliness with Swift, despite the issue with Perry. Swift and Rihanna have been photographed being friendly at some events over the years, and the first time there was really any negative words between them was when Rihanna said she didn't want be in T. Swift's "girl squad." She told NME in September 2015,

While her comments were fairly innocuous and honest, headlines spread that Rihanna was "dissing" Swift. The next few months were quiet, and they weren't pictured together again until April 2016, when Rih joined Harris on stage for his headlining spot during Coachella. Swift was there to support her boyfriend, but she totally freaked out over Rihanna and they had a sweet hug after the gig:

All looked fine and well in their world, and just a few days after this, Harris officially released "This Is What You Came For." Swift even promoted the song on her Instagram, which makes sense in hindsight considering she had a huge part in writing it, and I can totally imagine they were all just in the studio and having fun to make it the hit it is today. After the song-writing drama and Harris' Twitter rant, Hollywood Life sources clamed that Rih was Team Everyone.

So there you have it. Rihanna and Swift have gone through some drama when it comes to their friends, but have emerged as two artists who seemingly have a lot of respect for each other.