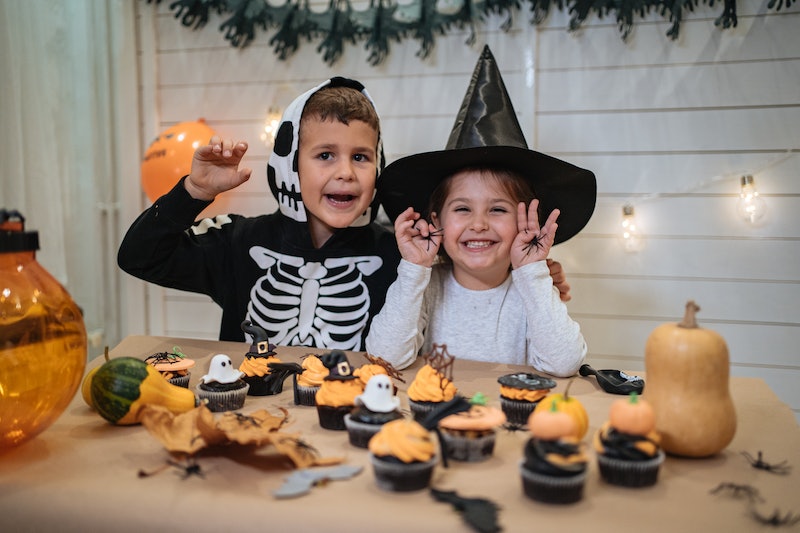 No matter how old you are, it's likely that if you love autumn, you absolutely adore Halloween. And, really, what's not to love? Costumes, parties, and free candy are bonuses for just about everyone. But have you ever wondered why we say "trick or treat" to get that free candy in the first place? If you ever went door to door on Oct. 31 as a kid, you almost certainly remember how parents and neighbors alike wouldn't give up the good stuff until you said those three words with a big smile on your face (or a spooky, scary expression, if that was more your style). As an adult, you may or may not go trick or treating yourself (though more power to you if you do!), but the question remains: Where did this strange expression come from, and how did it catch on?

According to Today I Found Out, the first in-print mention of trick or treating's key words dates back to Nov. 4, 1927. The phrase appeared in a Canadian newspaper discussing the town's Halloween evening, where they described the holiday festivities as follows: "The youthful tormentors were at back door and front demanding edible plunder by the word 'trick or treat,' to which the inmates gladly responded and sent the robbers away rejoicing."

But while that image is strangely delightful, it still doesn't establish where the phrase actually comes from. According to Smithsonian magazine, however, the phrase "trick or treat" goes all the way back to antiquity — specifically to a Celtic tradition in which people would celebrate the end of the year by dressing up as evil spirits. The logic was that if, as we moved into the next year, the dead and living overlapped briefly, which means the living would have to protect themselves from the dead and demons somehow. Dressing up as a demon yourself was seen as the best protection against being taken into the underworld. And actually, it makes a certain amount of sense; there's nothing like a good disguise to trick your enemies, right?

Jumping forward into the Middle Ages, people continued this tradition, but added in the food exchange element. Children and adults alike would sing or offer rhymes or phrases at the doors of their neighbors in exchange for food and treats while in costume. The idea here was that these "exchanges" were all on behalf of the dead. A little creepy, but fascinating all the same.

Then there is a pretty significant leap in time until trick or treating became part of the mainstream again. In fact, it wasn't until the 1920s and '30s when people (mostly children) began trick or treating as a cultural tradition. (Makes sense, given what we already know about when the first instance of the phrase appeared in print, right? Right on schedule, 1927.) According to Smithsonian, there was a slight lull in trick or treating during World War II because of sugar shortages, but otherwise, the tradition has been a staple of the holiday ever since. The "trick or treat" phrase itself seems to be a combination of various cultural references that have joined together over time — tricks refer to demons walking among the living, as well as the nature of being in a disguise yourself. Treats refer to handing out food and candy, of course.

Whether or not you're going to trick or treat this year, the history of a holiday is always good go-to small talk, especially when it's a little bizarre. All the better if you're in full-on costume, am I right?