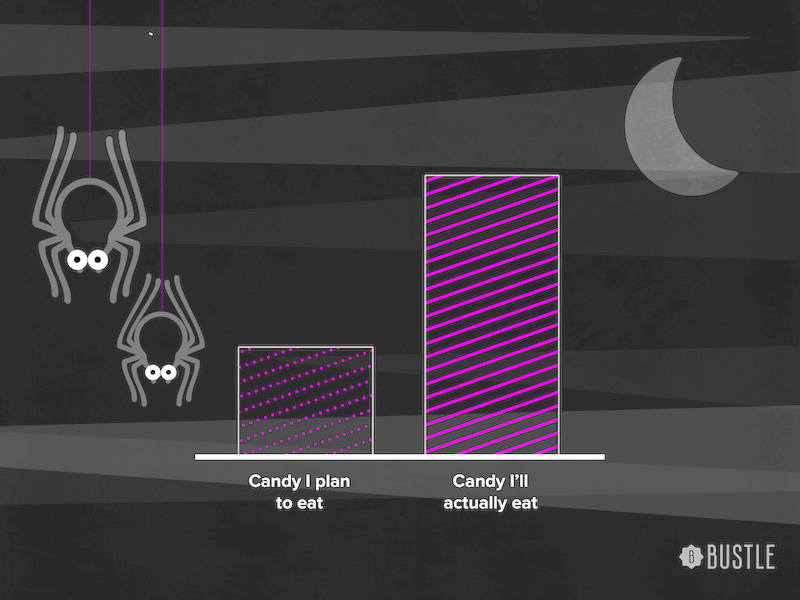 Anyone who thinks that Christmas is the best holiday of the year is seriously tripping. Yeah, presents and egg nog are cool, but when other than Halloween do grown-ass adults get to dress up like zombies and emojis and Donald Trump, and then gallivant about consuming almost as much candy as booze? When else do we get to go out on the town with our besties dressed as Taylor Swift's squad (dibs Cara Delevingne)? When else do we get to intentionally scare the crap out of ourselves with haunted houses and horror movies, and then use that as an excuse to cuddle up to the guy or girl of our choosing?

Halloween is full of opportunities for hilarity and debauchery. And with all that absurdity in mind, Bustle has put together seven charts that perfectly crystallize what October 31 is all about — sugar, alcohol, and questionable decision making (or at least one of those three things).

Every year you have grand plans, and every year you end up dipping into your crusty old supply of fake blood that you bought in 2007 and going as a Millennial Zombie.

Don't be that guy...and don't be friends with that guy.

You may want to check if his or her political views and personality align with the costume before deciding whether or not to go to bed with this person.

Hey, no hate to those ladies who opt to dress as sexy kittens this year, but when you spot someone in a costume that's both ridiculous and distinctly unsexy, you'll probably want to be their new best friend.

If you feel like making this chart a reality, here's a glow-in-the-dark Jell-O shot recipe that will be a bigger hit than that costume you threw together at the last minute.