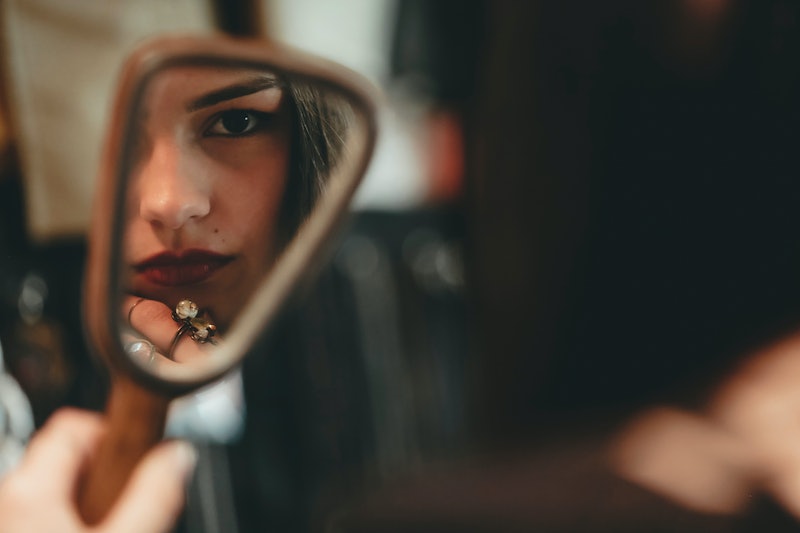 Any fan of the strange and nightmare-worthy eventually wonders what makes mirrors creepy. They're a staple of the horror genre for a reason; mirrors are tricky business. In comparison to the methods people used to view themselves in the past, modern mirrors provide a crystal-clear reflection to the viewer, but their contents are still easily manipulated. As Natalie Angier wrote in the New York Times, mirrors are "like pieces of dreams, both hyper-real and profoundly fake." No horror movie could ever be as heart-pounding as the fleeting moment you catch your reflection's unexpected movement across the room, and nothing is quite so unsettling as the idea that a mirror's image is a little... off.

Of course, none of this has stopped people from being fascinated with them. Mirrors made of highly polished bronze were prominently featured in ancient Egyptian culture, and the superstition about breaking mirrors dates back to ancient Rome. (Breaking a mirror supposedly damaged your soul, which was reflected in the mirror; because Roman culture held that the soul renewed itself every seven years, it would take that long for things to go back to normal — hence the idea of a broken mirror resulting in seven years' bad luck.) Much like photographs, it wasn't uncommon for people to believe that mirrors didn't reflect your physical self, but your soul — that's why vampires don't have reflections. But having a soul isn't always a good thing; according to some beliefs, people's souls can get trapped in mirrors forever (and ever, and ever).

With all the superstitions surrounding mirrors, it's no surprise that they show up in all sorts of mythology, like the legend of Narcissus or the Evil Queen in "Snow White," and urban legends like "Three Kings." But what is it that makes them so fascinating?

Mirrors reflect our world, but by nature their contents aren't real. Here's where the New York Times comes in again — psychologist Marco Bertamini compared mirrors to virtual reality. "The object 'inside' the mirror is virtual, but as far as our eyes are concerned it exists as much as any other object," he explained.

This may not seem like a big deal, but if you've ever played "Bloody Mary," you know that our brains go a little strange when we look into a mirror for too long. In a 2010 experiment, researcher Giovanni Caputo of the University of Urbino found that when people stare at their own reflections in a dimly-lit room for an extended period of time, many of them experience a "strange-face illusion." Within less than a minute, participants in his study started to see other faces, distortions in their own faces, or even the appearance of monstrous beings in the mirror. According to Caputo, some of these "other" faces take the form of "archetypes" like an old woman or child, so there's a chance you and a friend could end up seeing similar (terrifying) reflections — and thus, an urban legend is born. It's called the Caputo Effect, and if you feel like trying it for yourself, you can read the experiment here.

We might intellectually know that reflections aren't always what they seem, but like all illusions, it's still hard to reconcile theoretical knowledge with what's in front of us. Between centuries of superstition, the inherent creepiness of doppelgangers, and the brain's tendency to go haywire when you look into a mirror too long, it's a wonder mirrors aren't more unsettling.

More like this
Kimberly J. Brown & Daniel Kountz Looked Back On Their ‘Halloweentown’ Romance
By Stephanie Topacio Long
American Girl Doll Memes Are Going Viral On Instagram & Tiktok
By Emma Carey
The 5 Best Manifestation Apps
By Brittany Beringer
20 Genius Kitchen Storage Solutions For Decluttering Your Space
By Emma Garza
Get Even More From Bustle — Sign Up For The Newsletter