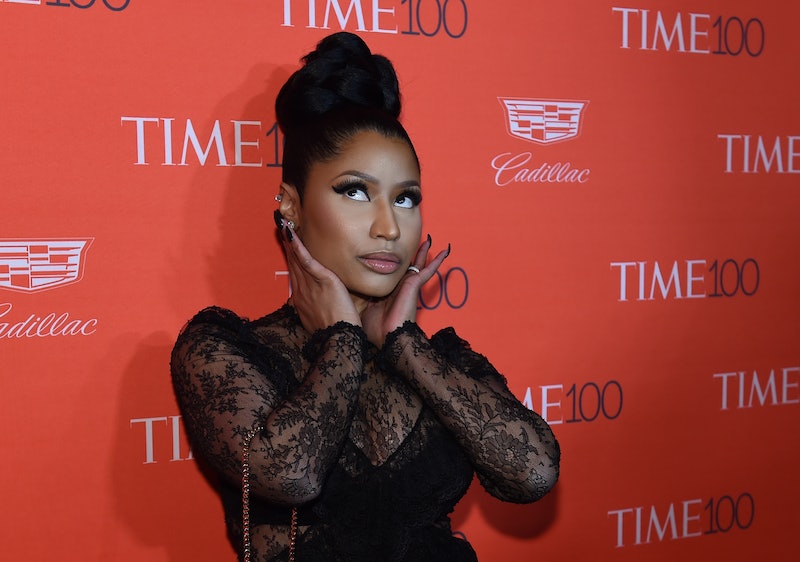 I don't know about you guys, but if there's one performance at the MTV Video Music Awards that I categorize as legendary, it's Nicki Minaj shaking it to her hit track "Anaconda" in 2014. It was no surprise that Minaj followed up that performance at the VMAs the following year with an equally insane performance. Her version of "Trini Dem Girls" and "The Night Is Still Young" (featuring Taylor Swift!) may not have been quite as booty-popping as her 2014 number, but it was quintessential Minaj: inspiring, fabulous, and super sexy. But, though Minaj's 2015 performance was everything anyone watching the VMAs needed to see, some people wondered — was Minaj lip-syncing at the VMAs, and would Minaj lip-sync at the 2016 VMAs? Though we don't have an official answer, looking back at Minaj's track record can clue us in to how these performances go down.

If you watch Minaj's 2015 VMAs performance, you might notice that it seems like she's giving her all during the rap-heavy segments of the song. You can tell that Minaj is slightly out of breath during parts of "Trini Dem Girls," likely because 1) she has to wear a huge, feather-y costume under hot lights and 2) because she's also tasked with dancing in addition to rapping. However, during the portion of the performance that goes into "The Night Is Still Young," Minaj seems to take a bit of a breather. A track is clearly playing in the background, and instead of singing every part of the chorus (the parts that go "I never worry/life is a journey," for example) Minaj harmonizes on certain lines. It's not necessarily that she's lip-syncing: it's more that she physically can't sing everything and dance around.

Though there's no way to know this for sure, in 2015, Bustle's Mallory Carra pointed out that it did seem like Minaj was lip-syncing when she joined Swift on stage for "Bad Blood," and I'm inclined to agree — frankly, it didn't seem like Minaj was singing along with the words completely. Of course, there's no proof of this — and either way, whether Minaj was singing live or not, she still put on one heck of a show.

It's worth noting that Minaj has denied lip-syncing allegations in the past. In 2010, she took to Twitter to clear the air after fans suggested that she was lip-syncing at the BET Awards that year, reports MTV News:

According to Us Weekly, Minaj will be taking the stage with Ariana Grande at the 2016 VMAs to perform Grande's track "Side By Side" off of her album Dangerous Woman, so only time will tell whether she'll be singing and rapping every word. Maybe I'm in the minority here, but if Minaj was lip syncing at either show — so what?! We know for sure that she can sing and rap, and she's always going to put on an amazing show no matter what.

I'm hoping that, whatever does (or doesn't) come out of Minaj's mouth, it'll all be packaged together for one outstanding performance at the 2016 VMAs.