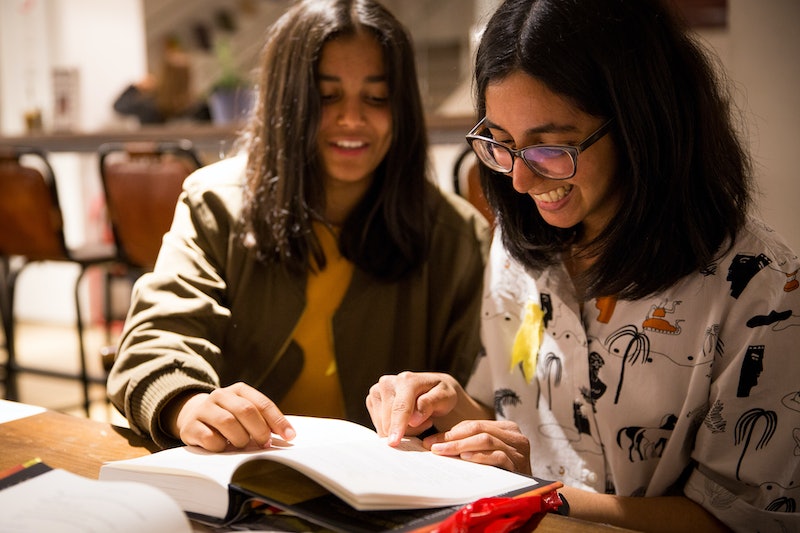 Living every day in a patriarchal society can be hard. I mean, it is hard, and I know there are definitely times (like all the time) when I need some kickass feminist voices and stories in my life for some inspiration, guidance, or comfort. And sometimes I just want to read about someone who is totally behind the fight for a more feminist world and speaking truth to power. Given that misogyny is so real and oh-so tiring, here are five feminist stories you should read this weekend.

Women experience various forms of oppression — not just sexism. It's important to be intersectional when we consider how different women experience their day-to-day lives. For instance, someone might experience both racism and sexism at the same time; or sexism and ableism; or all three and more. It's so important to be inclusive of gender, sexuality, race, class, immigration status, ability (both physical and mental), and body types when we talk about feminism. So here are five stories to read this weekend that can hopefully give you what you need to re-energize, from big wins and small wins to poetry and tips for self-care when you need it most.

Purvi Patel Could Be Released From Jail By September

If you aren't yet familiar with Patel's story, she was arrested in 2013 after seeking emergency medical care at the hospital because she was heavily bleeding while pregnant. The State of Indiana charged Patel with feticide and felony neglect after suggesting that she had induced her own abortion. However, Patel told doctors she had a miscarriage. She was initially sentenced to 20 years, but she could be up for re-sentencing, and could thus be released by September.

Patel's story is so important because she was essentially punished by the state for seeking emergency medical attention. No one should be punished for a miscarriage or for an abortion. Abortion and medical care should always be available and accessible to all people regardless of race, class, gender, sexuality, or ability.

Read the full story at Rewire.

A woman at a beach in Nice was reportedly forced by armed police officers to remove her burkini on Tuesday, Aug. 23. They ordered her to remove the garment due to a French law that bans the burkini. The woman was resting on the beach when the officers approached. Another woman in Cannes shared a similar story about having been approached by officers and was fined for wearing a tunic and a headscarf on the beach, and individuals allegedly yelled at her to "go home," according to the Guardian.

Well, since women are so badass — especially when it comes to organizing — protesters staged a beach party outside the French embassy in London on Thursday, Aug. 25. According to Feministing, the participants poured sand outside the embassy and came prepared with beach chairs, inflatable devices, and wearing various types of garments because all women should be allowed to wear whatever we want, whenever we want, and wherever we want without worrying about men policing our bodies.

Esmat Jeraj, who helped organize the protest told the Guardian, "If the burkini enables women to go and sit on the beach and enjoy the sunshine, surely that should be encouraged. It helps ensure these women are no longer on the margins."

Read the full story at Feministing.

Peruvian Court Orders The State To Deliver The Morning-After Pill

This is definitely a win for reproductive health and rights in Peru. The First Constitutional Court of Lima is ordering the free provision of emergency contraception in public health centers across Peru. The order also notes that the Ministry of Health must redistribute the pill in state-wide health centers over a 30-day period, according to El Comercio.

Brenda Alvarez, a lawyer with Promsex, a feminist sexual and reproductive health organization told Telesur, "This represents a small victory for Peruvian women. We are facing a decision that seeks to vindicate sexual and reproductive rights of women in this country." According to Telesur, the debate over access to affordable emergency contraception in Peru dates all the way back to 2001, and access and legislation over the pill have been widely disputed in the years since then.

You can read more about this win at Telesur.

OK, so this isn't quite the same kind of news story as the prior stories. But BuzzFeed did report on why every woman should follow Toronto-based photographer and writer Rupi Kaur on Instagram. And it's because sometimes we need some poetry about survival, love, and loss to speak to our personal experiences as women.

Kaur explores various important themes associated with womanhood from love, loss, and abuse, to healing and how to care for ourselves and each other. Kaur's representation of womanhood is also so important because her writing is intersectional and speaks to various experiences of being a woman. Her poetry is all-around super feminist.

Check out more samples of her writing on BuzzFeed.

If you're not familiar with The Body Is Not An Apology, take this time to get acquainted. Writer Julie Feng talks about the importance of practicing self-love and why we all need to care for ourselves most when it feels like it's most difficult. As the weekend approaches, take the time to take it easy, re-focus, re-center, re-energize — if you're able — and read this important piece about caring for yourself.

Feng writes on the importance of "emotional well-being" when it comes to one's health and general stability. It can absolutely sometimes feel like a privilege to be able to care for oneself, however, it is so vital and so necessary to do so, to ensure a healthy mind in our day-to-day lives. So, I leave you with the importance of self-care as you enter your weekend.

As Feng writes, "I am asking myself, gently, to remember to take care of myself."

You can read the full story at TBINAA.

Enjoy these five feminist stories over the weekend so you can be ready to fight the patriarchy all over again.