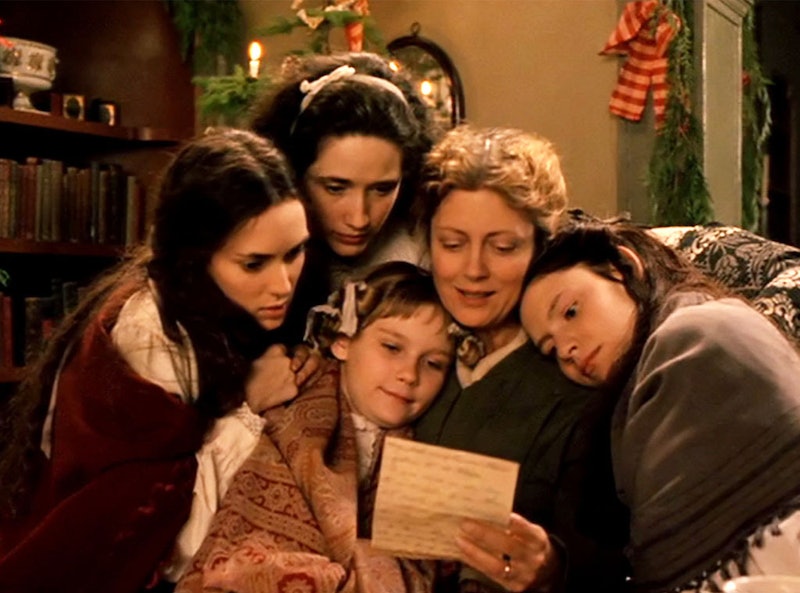 When you think of 19th century literature, the word "feminist" might not be what that immediately pops into your head. However, don't be so fast to disregard all works from that era, as Louisa May Alcott's 1868 novel Little Women was full of feminism and inspiring female characters. As such, when I saw the 1994 film version as a young girl, I felt immediately transformed. I had always been a rather independent kid, but watching the progressive March matriarch raise her four daughters into, well, little women, truly inspired me. Little Women helped make me the woman I am today, and it's because each of the characters were so different, and each had a valuable lesson to teach.

All of the four March sisters were different and influential in their own ways. Oldest sister Meg (Trini Alvarado) was probably the strictest of the bunch when it came to adhering to societal norms. She managed the house when Marmie was out, and fulfilled the duties expected of women at the time. She'd often scoff at Jo's tomboyishness, or gasp at anything approaching unladylike behavior. But when push came to shove, Meg rejected the uppity standards of her peers. For instance, she refused to buy silk dresses to match her debutante friend, because the silk mills used child labor. And while many of her friends were marrying rich and living frivolous lives, Meg fell in love with a poor teacher and entered into a life that she knew was going to be hard, but no doubt full of love. Her choice to marry John Brooke for love rather than status proved Meg had her own convictions — and despite the fact that she fulfilled the expected roles of wife and mother, she didn't end up there by force, but by her own choosing.

Then there was Jo (Winona Ryder), who was by far the most fiercely independent. A writer who rejected the ideas of fitting in, adhering to feminine standards, or thinking that men were inherently better than women, Jo got up the nerve to head to New York and try living out in the world on her own, something almost unheard of in the 19th century. If anything, Jo was a feminist before the word even existed. When debating a male student about women voting, Jo said, "I find it poor logic to say that because women are good, women should vote. Men do not vote because they are good; they vote because they are male, and women should vote, not because we are angels and men are animals, but because we are human beings and citizens of this country." Watching Jo refuse to conform taught me that I didn't have to either, and what could be more inspiring than that?

From Beth (Claire Danes), I learned of mortality. That she was always sick reminded me of the fragility of being a human being, but also that what you do with the precious time you have on this earth matters more than how much of it there is. Beth chose to stay close to home — "Why is everyone always leaving?" she asked in her final moments — but she had her own priorities and her own interests, particularly in music. Though she never became a writer like Jo, a mother like Meg, or a European traveler like Amy, she accomplished much in her short life just by loving and being loved, which should be a lesson for all of us.

Amy (Kirsten Dunst) may have seemed like the most selfish of the bunch, but she definitely had wonderful qualities, especially ones that grew as she aged into her older self, played by Samantha Morton. For one thing, Amy was honest. She may have been bit snobby as a child, and admired things that seemed frivolous, but she never lied, and she never pretended to be something she wasn't. Her vanity eventually transformed into an appreciation for the arts and finding the beauty in all things, and while her childish tendencies caused a lot of drama in Little Women , her admirable growth proves that, hey, we all had our bad qualities as kids but we all change as we grow older.

But the biggest lesson that made an impression on me as a young woman and still reverberates to this day came from Marmie March (Susan Sarandon). Marmie made it a point to remind her daughters that outer beauty is less important than one’s character. "I only care what you think of yourself," she told her girls. "If you feel your value lies in being merely decorative, I fear that someday you might find yourself thinking that’s all that you really are. Time erodes all such beauty, but the one thing it cannot diminish is the wonderful workings of your mind, your humor, your kindness, and your moral courage." Marmie's lesson was always to love yourself, regardless of your looks — a pretty powerful message to a pre-teen girl.

Little Women presented a group of feminist, strong, and empowering women, all of whom made a big difference in the life of young, impressionable me. The March sisters and their mother were all different, liking different things and having different goals and attitudes, and their actions showed me that there's no right way to be a woman. And even if there felt like there was a right way back in the 19th century, the ladies of Little Women didn't abide by it, an impressive act that highlights the importance of not making any woman feel defined by society's expectations.

All four sisters and the wonderful mom of Little Women made a lasting impression on me, and it's a film I'll certainly show to any daughters I may have one day. Nearly 150 years after the book's publication, new readers and viewers will be able to believe Jo's words for themselves when she says, "I should have been a great many things." Hopefully they'll be inspired, like I was, to head out into the world and make it so.