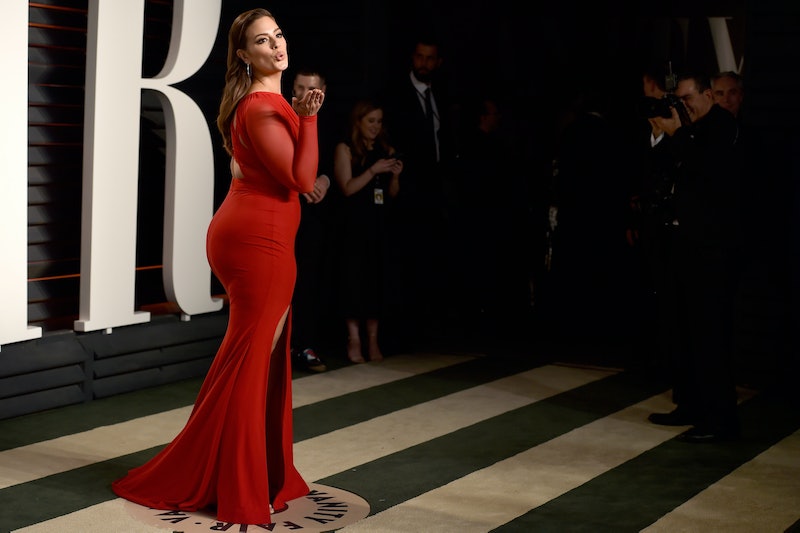 Ashley Graham is about as well-known as models come these days. And even if you're not a superfan of the modeling world, you definitely saw Graham's Sports Illustrated Swimsuit Edition cover when it came out in February 2016. Being the first curve model on the cover of SI was (and still is) kind of a big deal in the fashion world, and Graham, who has been in the industry for 15 years, hasn't forgotten its significance since it dropped — even with the whirlwind of a year she's had. "Sports Illustrated is definitely a trailblazer and disrupted the fashion and media industries by putting me on the cover of the swimsuit issue," the new America's Next Top Model judge (see, I told you she has a lot going on) says of the memorable cover when Bustle spoke to Graham over email.

While Graham had a major fan base long before the landmark cover dropped earlier in 2016, her following has only grown exponentially since. Events like Aug. 28's Sports Illustrated Summer of Swim fan festival and concert in Coney Island allow Graham to interact with her massive fan base. At the event, which starts at noon, Graham will be joined by other SI swimsuit models for autograph signings, a photo booth, and more.

"I'm excited to reunite with the other SI Swim models, some who I haven't seen since February when the issue was released," Graham says of the upcoming fan festival, which will also feature Action Bronson headlining a concert. "And more so, it's always great to see familiar fan faces at these events, especially the younger girls who tell me that my cover has inspired them to have more confidence."

Graham is known for her talent, beauty, and — more than maybe any other characteristic — her confidence. More than any other question, Graham says she's asked by fans how exactly she became so confident and self-assured.

"I tell them that it doesn't come overnight," Graham says. "It's a personal journey that you have to work at every day. I remind them that their words have power, and that they have to speak positivity and life into their bodies."

While Graham says that confidence is, indeed, something that requires work, she also notes that having had positive, encouraging influences in her life like her mom made a huge difference in her journey — another fact that backs up the power of positively speaking to those around you.

"[My mom] always told me I was beautiful, and she never obsessed over her weight or looks in front of me. She was my role model, and now I'm honored to be a role model for so many women who feel like they aren't being represented," Graham says.

Body confidence is one thing, of course, but having confidence in your career, your choices, and your talents is another. If you feel like you're having trouble achieving your dreams, or like you're getting the door closed in your face again and again, Graham can relate — and she says that her success is evidence of exactly why you shouldn't worry about the naysayers.

"Despite being told 'no' so many times, my career is proof that you can earn anything you work hard for," Graham says.

And while Graham's career trajectory continues to blow everyone's mind, she's far from done with changing the modeling industry and shaping it into a more inclusive and positive space.

"Size diversity is now a major conversation, and this year alone, brands and advertisers are embracing the body positivity movement," Graham says. "The fashion industry must continue down this path of inclusion."

More like this
Iris Law's Skunk Mullet Is Not For The Faint-Hearted
By Tomi Otekunrin
Are Tom Daley & Louis Theroux Bound For 'Strictly'?
By El Hunt
Marcus Rashford Took Inspo From Kravis For His Adorable Proposal To Girlfriend Lucia Loi
By Frances Stewart
Ryan Reynolds Brought Some Famous Friends To Wrexham A.F.C's Last Game Of The Season
By El Hunt
Get Even More From Bustle — Sign Up For The Newsletter