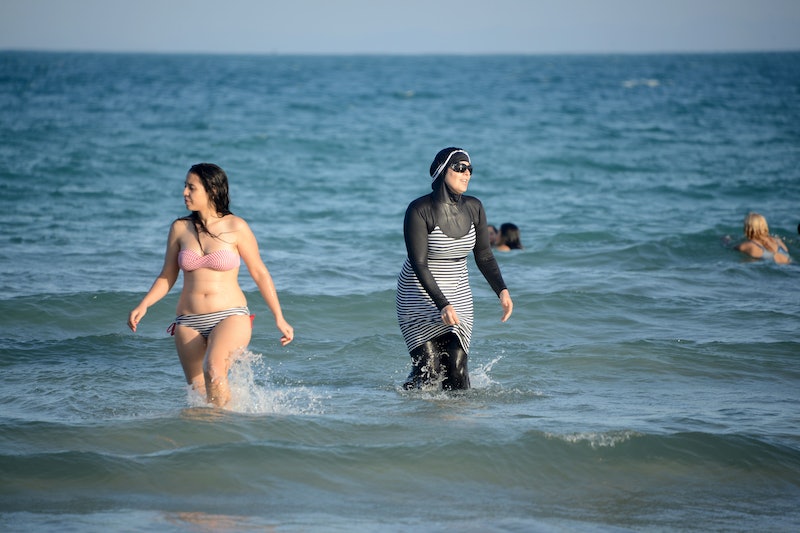 Seventy years after French engineer Louis Réard introduced the world to the bikini, France continues to drive debate over what women should wear on the beach. Who knew a swimsuit could hold such power? Twenty-five French cities imposed bans on burkinis, the full-body swimsuits preferred by some Muslim women, following terrorist attacks in Paris and Nice. The bans have sparked international debate after pictures emerged of four armed policemen forcing a woman relaxing on a beach in Nice to remove some of her clothing so as to better emulate France's secular values. But could other countries impose burkini bans of their own?

The burkini ban seeming to spread across France isn't the first time Islamic clothing has come under debate in Europe. Both the burqa — a single piece of fabric worn to cover the whole body — and the niqab — a full-face veil that leaves only the eyes uncovered — were banned from public spaces in France in April 2011 under the argument they were "conspicuous" religious symbols. While proponents of the ban claim full-face veils are symbols of religious extremism, critics have deemed it a violation of religious freedom. The burkini ban, although not nationwide, is merely the latest form debate over secularism and religion has taken in France.

While no other country has yet to ban the burkini, countries that followed France in banning the burqa and niqab could join them in banning the burkini. Although France became the first European country to ban full-face veils from public spaces, Belgium quickly enacted a ban of its own in July 2011. Women caught wearing the burqa or niqab could be fined or sentenced to up to seven days in jail. There are currently no restrictions on burkinis in Belgium, but that could change. Flemish parliamentarian Nadia Sminate, a member of the conservative nationalist New Flemish Alliance party, has already called for a ban in Belgium. "I do not think women want to walk around on the beach with such a monstrosity in the name of their faith," the Washington Post reports she told the Flemish daily De Standaard.

A partial ban on full-face veils was recently proposed in Germany by Interior Minister Thomas de Maizière, as the country grapples with settling the more than 1 million migrants that arrived last year. Proponents of de Maizière's ban argue the full-face veil worn by some Muslim women is "incompatible" with German society. "It doesn't fit in with our open society. To show one's face is crucial for communicating, for living together in our society and keeping it together," the Huffington Post reports de Maizière said. Critics have argued a ban on the veil would only serve to fuel extremists' propaganda war and deter integration. But whether Germany would opt to impose a burkini ban on top of a partial ban on full-face veils remains to be seen.

There's one country who definitely won't be looking to take burkinis off the beach anytime soon. Although the Dutch Cabinet approved banning full-face veils from government buildings, schools, hospitals, and public transportation in May 2015, Deputy Prime Minister Lodewijk Asscher has said the Netherlands has no plans to impose a burkini ban. "That is not the right solution," he said, as reported by the Netherlands Times.

Summer may be ending soon, but we're unlikely to see the burkini ban debate fade as fast. Fear of the burkini isn't about the article of clothing itself, it's about what lies beneath and the issue is already weaving itself into France's upcoming presidential election. But only time will tell if other countries jump on the burkini bandwagon.