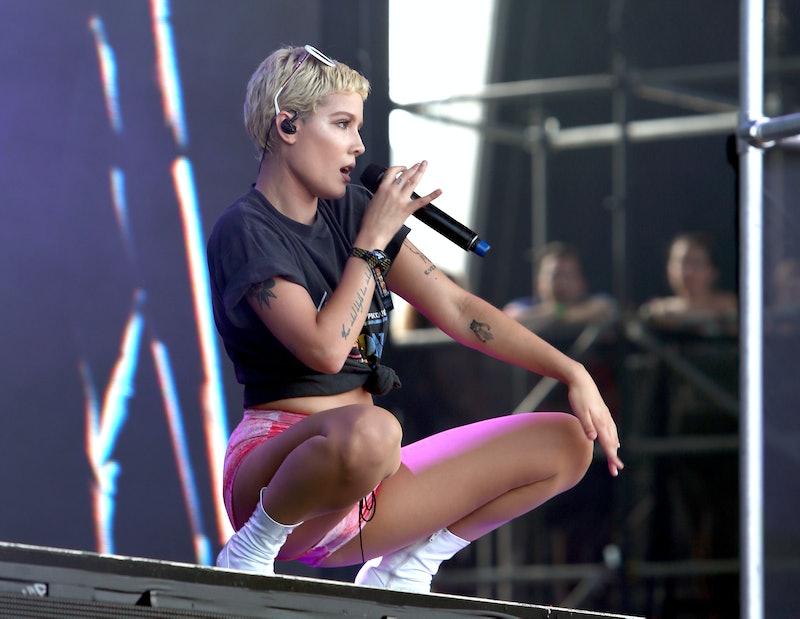 Those moon man trophies are nice, but the MTV Video Music Awards have always been more about live performances than honoring winners, at least for the audience at home. When the VMAs air Sunday Aug. 28 at 9 p.m. ET, a new crop of performances will be added to the pantheon of past VMA acts. Madonna writhing around in a wedding dress; Beyoncé coyly announcing her pregnancy; and Eminem bypassing a line of blond lookalikes on his way into the theater are a few of the most memorable. Will any 2016 VMA performances have that kind of staying power? Britney Spears's return to the VMA stage after a 10-year absence has the potential to be a new classic, but I'm also looking to some slightly under-the-radar performers to make a splash at this year's show. One of the performances I'm most looking forward to is Halsey hitting the stage with The Chainsmokers for their late-summer jam "Closer." A few acts will likely go hard-hitting and edgy for their VMA moment. But the "Closer" lyrics promise that the singer and the EDM duo will deliver one the of the show's more mellow and sweet performances.

OK, maybe it's an exaggeration to say that "Closer" is "under-the-radar." The track was released in late July and just this week, Billboard crowned it the reigning #1 of the Hot 100 singles chart. "Closer" is the first number one hit for Halsey and The Chainsmokers; clearly theirs is a successful partnership that they may want to revisit in other songs. It's a bit of a pop music dream to perform for a VMA audience the week your song hits the top of charts, so I'm expecting a lot of joy out of this performance. It's a joyful song to begin with.

If "Closer" had been released early in the season, I'd say it has Song Of The Summer potential. Its steady groove says laid-back beach parties and aimless road trips. The lyrics — sung by Halsey and Chainsmoker Andrew Taggart — chronicle the rekindling of a past relationship, forgetting old hurts and leaning into good memories. The song starts with the break-up from the guy's side, but don't worry, it perks up soon.

Hey, I was doing just fine before I met youI drink too much and that's an issue but I’m OKHey, you tell your friends it was nice to meet themBut I hope I never see them again

He sounds a little defensive and very young here. He wasn't ready for a real relationship, but fate steps in years later when he sees his ex again.

I know it breaks your heartMoved to the city in a broke down carAnd four years, no callsNow you're looking pretty in a hotel barAnd I can't stopNo, I can’t stop

Ahhhh, it's happening! From the lyrics, you get the feeling this break-up wasn't a terrible one. Nobody cheated or did something unforgivable. They just grew apart, and now they have another chance to get the timing right.

People don't carry memories this specific about people who didn't impact them, is all I'm saying. Also, things got physical again quickly; there's something magnetic here. The second verse gives the other half of this couple a chance to voice her side.

You look as good as the day I met youI forget just why I left you, I was insaneStay and play that Blink-182 songThat we beat to death in Tucson, OK

The Blink-182 song is a metaphor for this whole relationship. They thought they'd squeezed everything they could out of it, but four years later, they want to play it back again. Then the pre-chorus comes back, with the perspective flipped.

I know it breaks your heartMoved to the city in a broke down carAnd four years, no callNow I'm looking pretty in a hotel barAnd I can't stopNo, I can't stop

The chorus plays out twice more at the end of the song so that even the first time you hear it, you know it well enough to sing along.

The Chainsmoker and Halsey's uber-chill hit "Closer" is going to be one of the sunnier spots of this year's VMAs. Tune in Sunday night to sing along.