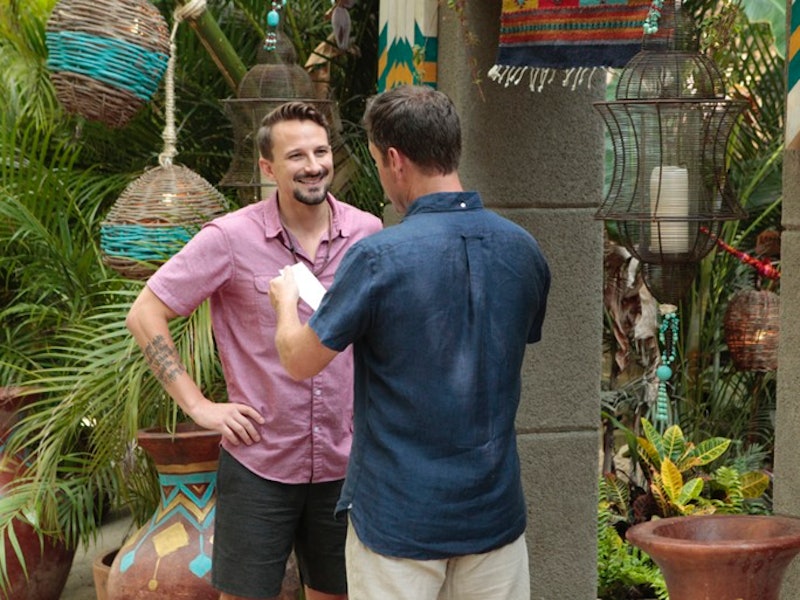 As fascinating of a concept as Bachelor in Paradise may be (not to mention downright entertaining to watch), it would be naive to think that every person is going to walk away from the show five weeks later with a lifelong partner. That's just really not the way life works. Happily ever afters have the unfortunate knack of being the exception, not the rule, which is why I'm very curious to see whether or not Evan is still single after Bachelor in Paradise Season 3 comes to a close. Because for a guy who seems to want to find love so badly, he sure is having a difficult time with it.

From Carly to Amanda back to Carly again, Evan hasn't exactly been a romance magnet on this show (which was not all that different during his time on The Bachelorette). But hey, it's not over until that final episode debuts, so there's still time to see if Evan will find that special someone before those credits roll. And considering how much I hate waiting to find these things out, I thought I'd do a little digging and see if there's any indicator of Evan's post- Bachelor in Paradise relationship status on social media. Here's what I managed to find...

Here we see Evan and Carly enjoying some down time behind the scenes. Granted, they aren't really doing anything to suggest they're relationship is of the romantic variety, but they do seem pretty comfortable together, you have to admit. Hmm...

He's Finally Getting A New Shirt

Granted, it's not anything like the V-neck that Chad ripped, but still. Clothing is clothing. Maybe this means Evan is finally ready to let this ordeal go because he's found happiness and doesn't have time for old grudges.

I mean, clearly he and Chad are soulmates at this point, right? Their entire story arc has all led to them finding love... with each other and this quote just further cements that idea. It's the love story we never knew we always wanted. Case closed. Mystery solved. We can all go home now.

OK, fine. Basically, there's no concrete way of knowing whether Evan is actually still single or not. But from the evidence I've collected, I'd say it's entirely possible he has a special lady in his life. After all, anything is possible when you're in paradise.