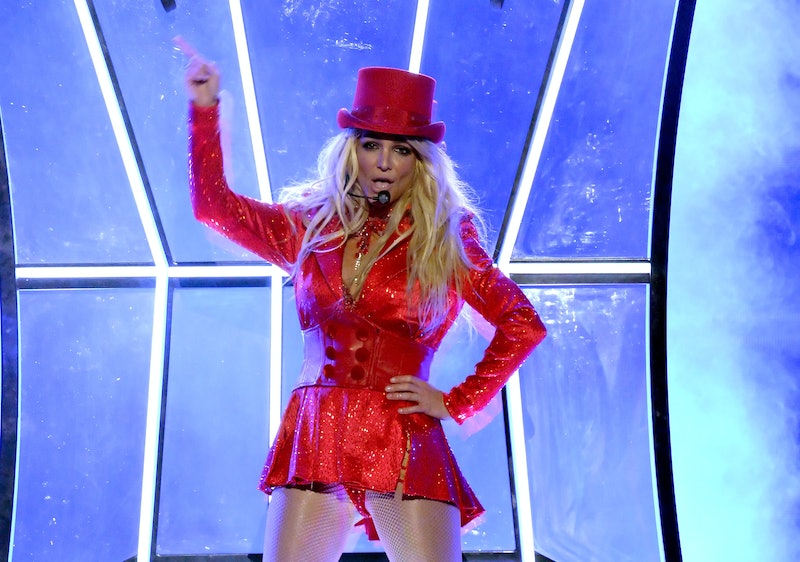 She has the guts, but will this bring the glory? On Friday, Britney Spears released Glory , the long-awaited addition to her discography — and highly-anticipated considering the singer’s been temporarily stationed in Las Vegas, depriving the rest of the world of her talents. Naturally the go-to move this morning was to flock to Spotify and see what are the best tracks off Glory , to double-check if there were any “Baby, One More Times” or “Toxics” in there.

The admirable thing about Glory is that Britney is taking a more contemporary and even perhaps grown-up approach in this album. The tragic thing is that neglecting her strengths means there’s nary a perfect pop hit single on this album... but definitely a hierarchy, which I have chosen to establish for you.

Now granted, I've long believed that Britney's best work dates back to the days of elementary school dances. I yearn for this to be a ferocious return to form, yet I also don't have the highest hopes for it. However I do have the expected nostalgic Britney feels, a working understanding of modern pop music, and two ears that can determine what’s good or not. I’m just saying, approach with a grain of salt, if not a tablespoon.

So if you still want an album refresher before you jump into Britney’s latest release, read on, and prepare for overly honest thumbnail reviews. Now with the five extra bonus tracks!

So if "Invitation" was a mid-album track, it probably wouldn't be ranked so low. It is, however, the way we open Glory, a crucial record meant to solidify Britney's staying power in the music industry. And it's just... not good. Its robotic, cold, and it is certainly no "Oops... I Did It Again." I truly don't have any interest in RSVPing to this party, which is really a problem.

Off the bat, I'm really turned off that we're spelling "love" as "luv," why is that a thing? Is Britney trying to show that she's not like a regular mom, she's a cool mom? Even that aside, "Just Luv Me" fails to impress me, it sounds like a Justin Bieber bonus track that had Britney's vocals switched in last minute.

"Better" has a similar vibe to "Just Luv Me," and it's the first bonus track... making you feel like, "Eh, does this album really need bonus tracks?" It does get better, though.

"Liar" tries to pull out all the big guns, which, at that point in the album (read: deep into the bonus tracks), no longer works on this relatively stripped-down album. This, this is a gigantic "eh."

The lack of conviction hurts the song the most. Britney is supposed to be hurt and surprised that "she loves just like me." I can’t feel the shock, Brit. I think you CAN believe she loves just like you. And that hurts your case here.

"Clumsy" had been already released to the masses, and now that I can hear it in context of the full album, I can easily say it lives up to the name. "Clumsy" doesn't really go anywhere truly exciting, mixing the rhythmic claps and the whirring synth only works at some points... I mean, I think it's fair to say that you shouldn't go into a three-minute long piece and have to apprise it like, "some parts were cool."

“I can’t compete with the stars in the sky, I’m invisible,” Britney sings. Oh girl, I know that feel. Otherwise I feel very strange about this song. It opens like an Air song, but then it's almost like somebody took that song and jacked it up with pop steroids so it's a monstrous version of itself.

I just want this song to slow down and stop sounding so goddamn choppy, and maybe then I could appreciate it. Also, she pronounces "dancing" kind of strangely here. You know it to be true.

The piano is a nice touch? Infinitely more minimalist than the usual Britney track (which is a statement that applies to much of this album) "Private Show" is certainly no "Circus," and that's all I have to say about that.

Short Version: it's an Adult-Only affair. It fails to seduce me, but it also doesn't profoundly offend me.

IS BRITNEY SPEAKING FRENCH BUT BADLY? Oh my God, plus 5 for hilarity.

"Love Me Down" works slightly better at being a genuinely sexy track. It still lacks at "Slave 4 U" wow factor, but truth be told Britney isn't going for that on this album, she is fully a grown woman. So.

I have so many notes on this that sort of just equate to, "I wish it was better." It heavily features that weird clubby noise that sounds like a whale in the ocean (you know the one, it's all over this album). The "ooh, ooh, oohs" sound slightly soulless. I don't know what G-Eazy is adding to the mix. I wish that it crescendoed in a bigger way, Katy Perry-style. You know what, it's the first track that can deem definitely pleasant, I just don't believe it's the best version of itself.

3. Change Your Mind (No Seas Cortes)

Don't get me wrong: this is not going to be the song that brings Britney back to her former glory, but I adore the chorus and even the light Spanish influence they injected in here.

I think I would unabashedly love this track if it wasn't for one tiny, fatal flaw: Britney's voice sounds autotuned as hell. I mean it's not light, expected, pop-star autotune, and it's also not intentional, aggressive, T-Pain autotune. It's like, "Oh, something didn't exactly jive in the mixing process" autotune. Listen to the end of every lyric, it's impossible to miss. Or drown it out entirely and enjoy a perfectly good song.

This, this is the kind of invitation that Glory needed to start with, it's just so good. You have a solid backing "womp," you have little snippets of string-strumming, you have an enthusiastic crowd insuring "Whatever you want, whatever you need" they'll do it. Every aspect of this makes it a solid club hit, and honestly? It's just fun.

I hate to say it, guys, but this is probably not Britney's most glorious album. Regardless, I encourage you to give the record a spin yourself... on whatever streaming service works for you.