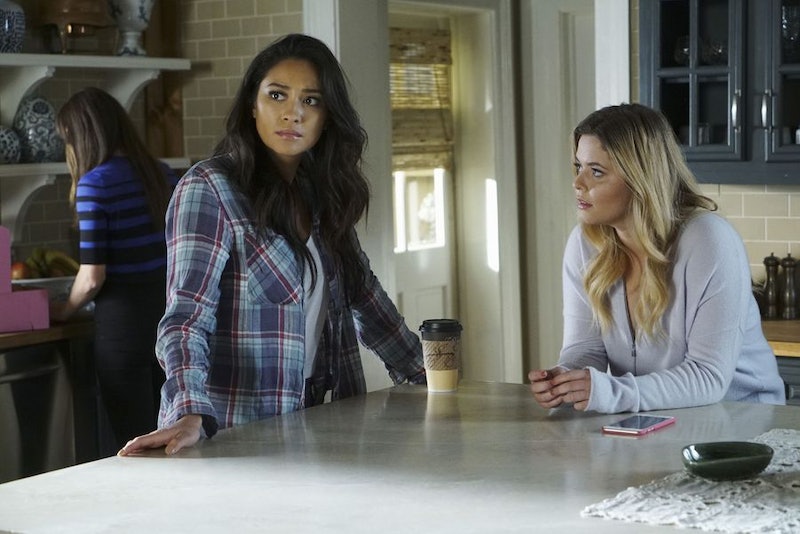 Having been a diehard Pretty Little Liars fans for over six seasons now, I'd like to think I'm somewhat immune to the surprise twists and turns this show is constantly throwing at viewers. And yet, time and time again, I've been proven wrong. This series is still constantly throwing me for a loop even after all of these years and I have a strange feeling that the Pretty Little Liars Season 7A finale could potentially pack the biggest punch of all. Thanks to "The Darkest Knight" episode description, many fans are predicting that a Pretty Little Liars pregnancy could come out of the woodwork by the end of the hour. Some think it could be Aria, while others are positive that it's Alison after seeing her throw up in the high school bathroom stall. But what if it's something a little more complicated than that?

The synopsis states that a "Liar discovers something about her future that could alter her course forever." Pregnancy is a logical conclusion, which immediately made me think of how, earlier this season, Emily's fertility eggs were stolen from A.D. Was this done simply to have something to hold over Emily or did A.D. potentially have a different plan in mind? It's possible that A.D. had the eggs fertilized and placed them inside Alison during her time at the mental institution, which would mean that she would technically be pregnant with Emily's baby.

I realize that this idea seems crazy, but if you think about it, there's definitely some credibility to the theory. Why have Emily's eggs get stolen if nothing was going to come from it? Why show Alison throwing up? Not to mention that Season 7 has been full of adorable Emison moments. Maybe they were all leading up to this particular moment.

Granted, this theory starts to get more than a little disturbing when you stop and think about how someone would've had to fertilize the eggs and place them in Alison in order for this to work. That's a major violation of a woman's body. And it only gets more uncomfortable when you start thinking about who the fertilizer (ew) could be. Is it A.D. looking to create the family he was deprived of since birth? Is it Noel? Wren? Lucas? No matter how you spin it, it's pretty messed up. But given all the horrific forms of torture this Uber A has proven to be capable of, it's something that simple can't be ruled out.

On the plus side, it would be great if this pregnancy ended up bringing Alison and Emily closer than ever. Team Emison could finally have the story arc 'shippers have been waiting for. And you just know that the Liars would all make amazing aunts, so I'm not entirely opposed to this happening. It's just that the way it would come about is so sick and so twisted that you can't imagine it could actually be true. And yet, when has that ever stopped PLL before?