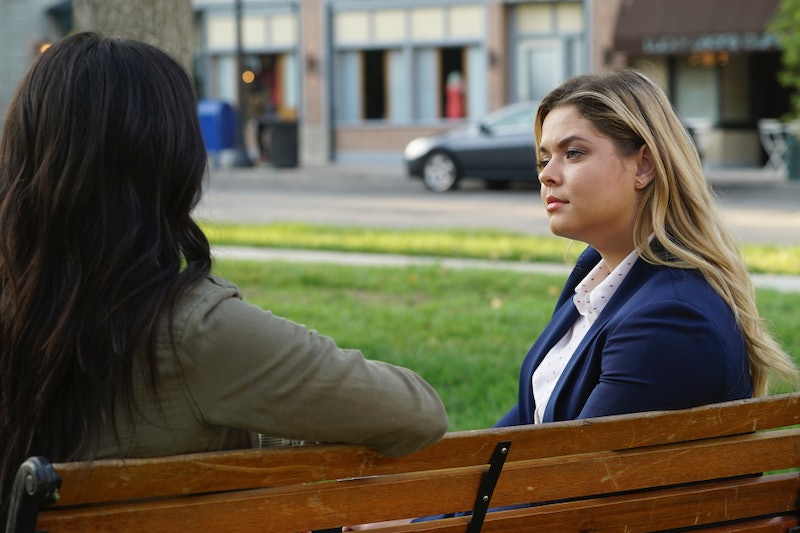 Back in the early seasons of Pretty Little Liars, Alison was painted as the show's villain. Though she may not have been the elusive A, flashbacks of the Liars' lives with Alison painted her as a Queen Bee that would make Mean Girls' Regina George shake with fear. I mean, this was a girl who would both criticize your outfit and blackmail your parents — there wasn't a lot of good there. Now, after years of stalking and being wronged by the people she loved, Alison has seemingly turned over a new leaf, even though the people around her are still shady as ever. Alison's husband, Dr. Rollins, conned her into marrying him and stole her money, and though Alison is still reeling from the betrayal, she's attempting to move on. However, one clue from Tuesday's episode "Exes And OMGs" hints that maybe she will have to think of Dr. Rollins yet again: did Pretty Little Liars hint that Alison was pregnant?

Some fans are wondering if that's what PLL is getting at with a scene from Tuesday's episode. In the episode, Alison returns to teaching after spending a stint in a mental institution being "treated" (read: tortured) by her doctor and husband. When she finally returns to school, she finds that the awful students in her class have pranked her by all donning black hoodies, a la her sister Charlotte.

After this scene, we see a shot of Alison throwing up in a bathroom stall. At first, it seems like the scene is just there because she still has leftover anxiety about returning to school so soon after Dr. Rollins' torture, but a clue from the Season 7A finale "The DArknest Knight" suggests that perhaps it could be more than that. Here's the synopsis that Freeform released for the upcoming finale:

Though it's not the only possible option, this synopsis could be talking about one of the Liars' discovering that she's pregnant. If that's the case, then Alison could be a frontrunner: she was the only Liar who was spotted with physical pregnancy symptoms, and considering that it seems each episode isn't jumping ahead in time too much, it would make a lot of sense for Alison to only pick up on a potential pregnancy a little later in the season.

Now the question is: what would Alison do if she was pregnant? Given Alison's search for family, I'm inclined to think that she might want to have the baby and raise it on her own. However, considering that the baby would be Dr. Rollins' child, it won't be an easy decision for Alison to make. A PLL pregnancy would mean that the Liars really aren't in high school anymore, and are now faced with real, adult decisions — ones that A isn't forcing them to make for once.