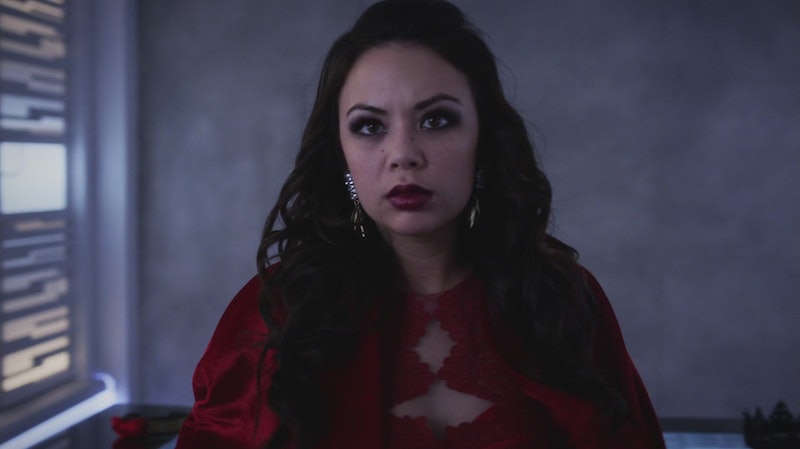 I love the core Liars like they were my own scheming squad, but if there's one character on Pretty Little Liars that I simply adore, it's the complicated, brilliant, and perpetually paradoxical Mona Vanderwaal. Mona isn't like the other Liars, whom we've pretty much all rooted for since the day A sent them their first frightening text. That's because, well, Mona was that A. Hanna's one-time BFF and Ali's former bullying victim was revealed to be the Original A at the end of Season 2, but instead of rooting her in villainy forever, Pretty Little Liars somehow made Mona even more awesome after she traded in the black hoodie. You just can't keep this (sometimes) bad girl down, which is why Mona gets to have some of the best PLL episodes and moments.

Forget the A Team: we should all be on Team Mona, whether or not she's plotting against the Liars. Sure, Mona may have gotten lost in a moment of "hyper reality" (according to Dr. Sullivan) when she started playing the A game, but now, Mona has mostly been an ally to the Liars, one who isn't afraid to break the law to help them out of a jam. (Mostly because Mona's too smart to get caught for anything, let's be real.) Think you're the ultimate Mona fan? Here are 17 episodes you need to watch ASAP:

Mona is clearly putting on a performance in the pilot episode of PLL — she's a lot more than just the mean, vapid, fashion-obsessed girl she appears to be — but it's a great reminder that Mona had everyone fooled for a good reason.

It's Camp Mona! Mona was busy being both A and attentive hostess at her glamping-themed birthday party.

This is one episode that really should have hinted to all of us that Mona had a lot of A-potential. At "Truth Up Day," Mona helps the Liars hack into the school's computer system at an alarmingly fast rate — who knew that the designer-obsessed diva was actually brilliant?!

"Loser Mona" pulling out all the stops and looking that fierce as Catwoman for a Halloween party should have hinted she had multiple personas. Once "Catwoman," Mona was able to go right up to her long-time tormentor Alison and earn her respect — at least, for a moment.

Mona's A reveal was a turning point for her character, but let's not forget how amazing Mona finally declaring herself as A was in that moment. Spencer turning around to find Mona in A's black hoodie was so delightfully creepy, it still ranks as one of the series' best twists.

"Catatonic Radley patient Mona" is yet another one of Mona's many personalities, and her first creepy appearance is in this episode.

Mona is in full A-mode in this episode, but quickly realizes she's being played just like the Liars when she discovers the new A was never going to show herself. Mona screaming "We're all going to burn!" is pure Vanderwaal dramatics.

After helping the Liars deal with their dead Wilden problem, Mona attempts to become part of Hanna's posse again. It's both sweet and sad seeing Mona struggling to befriend Mona while balancing out her A-tendencies.

Mona proves she's a ride or die friend when she not only trains Hanna to confess to the murder of Wilden in order to save her mom from prison, but then goes out and confesses herself for the crime to protect both Marins. The fact that Mona can convince everyone that a murder she had nothing to do with is one she committed is a testament to Mona's ability to make us believe pretty much anything.

Mona gets really vulnerable in this episode, after Aria steamrolls all over Mona and Mike's relationship and completes the difficult task of making Mona cry. This is one of the few episodes where we really get to see what's beneath Mona's tough exterior, and it turns out what's beneath is a sad little cinnamon roll.

Just when Mona had (mostly) won over the Liars' trust and decided to help them take down A suspect of the day, Alison, she gets "murdered" by a blonde in a black hoodie. Fortunately, it's not "game over" for Mona in this episode — though, at the time, it really felt like it was.

Technically, Mona isn't actually a ghost appearing to Alison on Christmas day — Mona is very much alive, albeit being tortured in the dollhouse at the hands of Charlotte DiLaurentis. Still, you have to love Mona's totally bonkers outfit and sassy ghost one-liners in the show's only Christmas episode.

The reveal that Mona is alive (and a hostage of the dollhouse) was the best gift that a Mona fan could ask for... even if it did mean she was spending months playing Alison against her will.

This episode is seriously intense, especially for Mona fans who were happy to see their girl saved. Mona may be alive, but Charlotte's Silence Of The Lambs-inspired torture is definitely not a glamping party. Still, you gotta love Mona for never breaking and helping the Liars get out of Big A's clutches.

Mona gets major points in this episode for her Red Riding Hood-inspired outfit and her amazing reason for knowing Clark was actually a cop: "Maybe you thought he was always happy to see you, but I could never get past the bulge in his pants."

What's Mona been up to in the five years since she left Rosewood? Fans of Mona shouldn't be surprised that the one-time villain found her way to politics.

Poor Mona — even when she's not A, she's still on the Liars' watch-list. After bringing a gift to Hanna's bridal shower (the one she technically was only invited to by Hanna's mom), it gets destroyed by A's plan to barbecue Aria. "Good intentions that look like trash," Mona muses, breaking all of our hearts in the process.

No matter what the Liars think of Mona, fans at home can't help but adore this complicated mastermind.