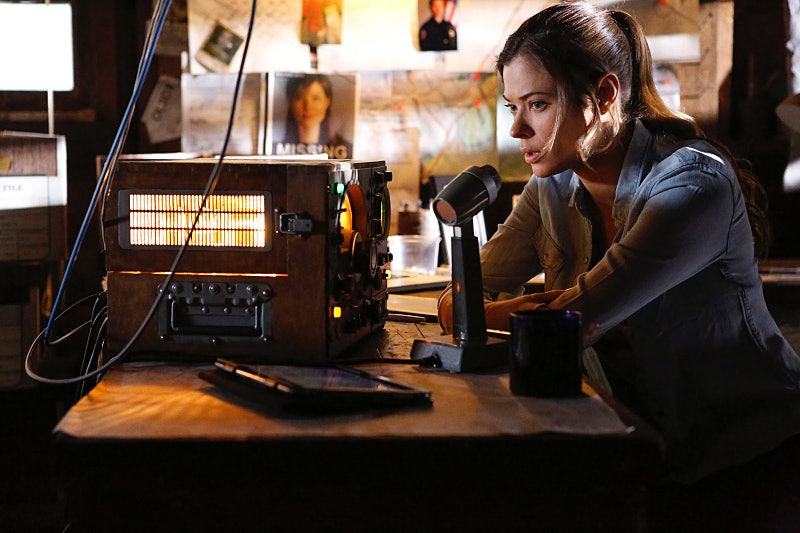 From the revived popularity of grunge style, to a Clinton running for president, the 2010s are shaping up to look a whole lot like the the 90s. But if an alien race landed on Earth thousands of years in the future, could they actually tell the difference between a 2016 time capsule to a 1996 time capsule?

Detective Raimy Sullivan of The CW's Frequency would know a thing or two about comparing these eerily similar time periods. Set in both present day and 1996, this time travel drama follows Sullivan as she navigates communicating between the two eras and the consequences of changing the past.

But not all of us have the wits of a time-traveling gumshoe. Stumbling across a time capsule from 1996 versus one from 2016, we might struggle to make out if that graphic tee is '90s-sincere or 2000s-ironic. But lest we all start donning plastic choker necklaces and burning through tape cassettes of line dance music this year, we've teamed up with Frequency to help you distinguish between these eras. Make sure to catch Raimy's journey through time when The CW's Frequency , premieres Oct. 5 — Wednesdays at 9/8 c.

In the '90s, compact discs were the at the forefront of tuneage technology. If you were really cool, you had at least 100 of them, all housed in a cinderblock-sized CD binder.

Funny thing about the cloud — it encompasses an infinite amount of data and music, but you can't physically put it in a time capsule.

The go-to beauty look for alt celebrities, club kids, and butterfly-clip-loving teenage girls alike trying to make themselves into walking land-faeries. Throw it in the time capsule!

Oops, so this is harder than we thought! When it comes to playful beauty trends, we haven't gone very far in 20 years. Frosted lipstick, pigtail buns, and glitter aplenty are back in vogue. Nowadays this nostalgic trend can be found on everyone from A-listers to regular cool kids.

Add a pair of platform sneakers, and you're the coolest kid in all the second grade.

If you're noticing that teens these days dress very similar to how you did as a child, it's no coincidence. What goes around comes around.

No duh... Kids in 1996 thought they were all that and a bag of chips. Key lingo that lets you know you are definitely in 1996 includes “PHAT” “as if,” "whatever" and “Da Bomb.” If you disagree, take a chill pill and talk to the hand.

These days, kids give birth to slang on social media — from "bae," to "squad goals," to "basic," to "on fleek." But the most emblematic words repping 2016 aren’t words at all. That honor belongs to the native language of millennials far and wide known as emojis.

The soundtrack to your '90s was basically like — "beepBEEPbeepbeepbeepBEEP whah WHAH whaaah eeeerrrr EEEEERRRRR psssshssshhhssshhssshhhshhhhhh." It was a simpler time, when getting online in 2 minutes actually seemed like a reasonable thing.

No longer do we cross our fingers for that sweet dial up sound to make a connection. Pure happiness in 2016 can now be summed up in seeing those four magical bars light up.

Ah, the disposable camera... that affordable photographic staple of every wedding and 90s kid school trip where you only had 24 shots to make it count.

2016: Smartphone on a Selfie Stick

Nothing says 2016 more than the extra human appendage known as the selfie stick. In an era when phones are used for just about every other purpose than making actual phone calls, the smartphone selfie reigns supreme. Will future friends will be able to figure out the utility of this contraption? Only time will tell...

This article was sponsored by The CW's Frequency, series premiere Oct. 5 — Wednesdays at 9/8c.