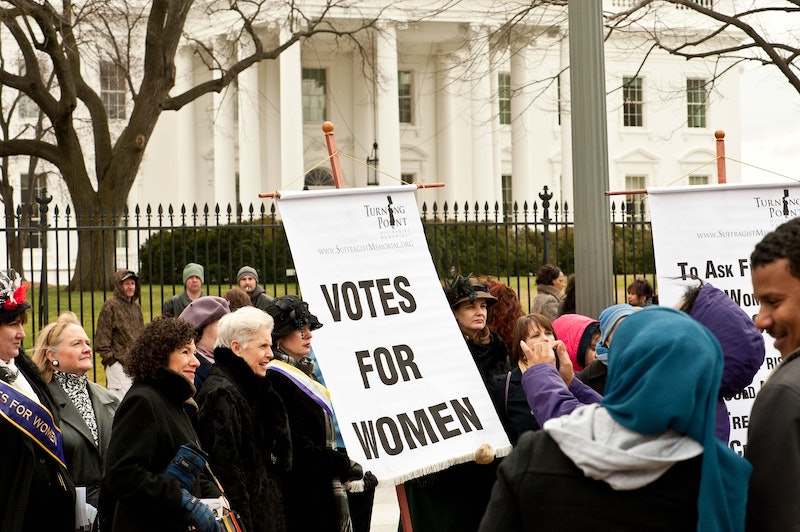 Many people celebrate the 19th Amendment for granting American women the right to vote. But for women of color, the struggle for suffrage did not end there — indeed, women of color were largely excluded from mainstream suffragette movements and had to create their own organizations. This Women's Equality Day, let's acknowledge that although women technically received the right to vote in 1920, many women of color remained disenfranchised despite the 19th Amendment.

As Nancy A. Hewitt and Steven F. Lawson wrote for Slate, millions of women — particularly black women in the South — came up against a number of voter-suppression measures at ballot boxes that prevented them from voting even after the 19th Amendment was ratified. These measures, which also disenfranchised black men, included poll taxes, literacy tests, and grandfather clauses. Celebrating the 19th Amendment for giving women the right to vote is therefore historically inaccurate, and it also disregards the various ways in which women of color organized their own suffrage movements.

Many of the obstacles women of color faced as they fought for the right to vote were rooted in a lack of intersectionality on white suffragettes' part. According to Hewitt and Lawson, National Woman’s Party founder Alice Paul and League of Women Voters president Carrie Chapman Catt were among the white women who rejected the National Association of Colored Women's efforts to eliminate voter-suppression tactics. Paul and Catt argued that women of color were fighting on the basis of race, rather than gender, and therefore did not find their work relevant to the women's suffrage movement. What the mainstream suffrage movements leading to the 19th Amendment therefore did was lend credibility to white feminism, rather than acknowledge and affirm the intersectional approaches by women of color.

White women's suffrage movements operated at the expense of people of color long before 1920. Although many white suffragettes were abolitionists, leaders like Elizabeth Cady Stanton were outraged that black men had received the right to vote before white women. “What will we and our daughters suffer if these degraded black men are allowed to have the rights that would make them even worse than our Saxon fathers?” Stanton once said, according to WBUR. It should come as no surprise, then, that many white women fought for their rights at the expense of people of color.

The struggle for voting rights has continued well after the 19th Amendment's ratification. It wasn't until 1957 that Native Americans were legally allowed to vote in all states. Then, in 1965, the Voting Rights Act worked to enforce the federal government's provisions against discriminatory voting restrictions. But even after the Civil Rights Movement and other organizing efforts, many marginalized groups are still routinely disenfranchised. Now, in 2016, courts still have to strike down voter ID requirements, and many cities still have language barriers at their ballot boxes.

Women of color have often led movements for justice and social change. The struggle for voting rights is no exception. This Women's Equality Day, actively recognize that white feminism frequently renders invisible the voices and struggles of women of color, and work to challenge that. Amplify the voices of women of color, and affirm their work. Take an intersectional approach to everything, including voting rights, and recognize that there is still a lot of work left to be done.