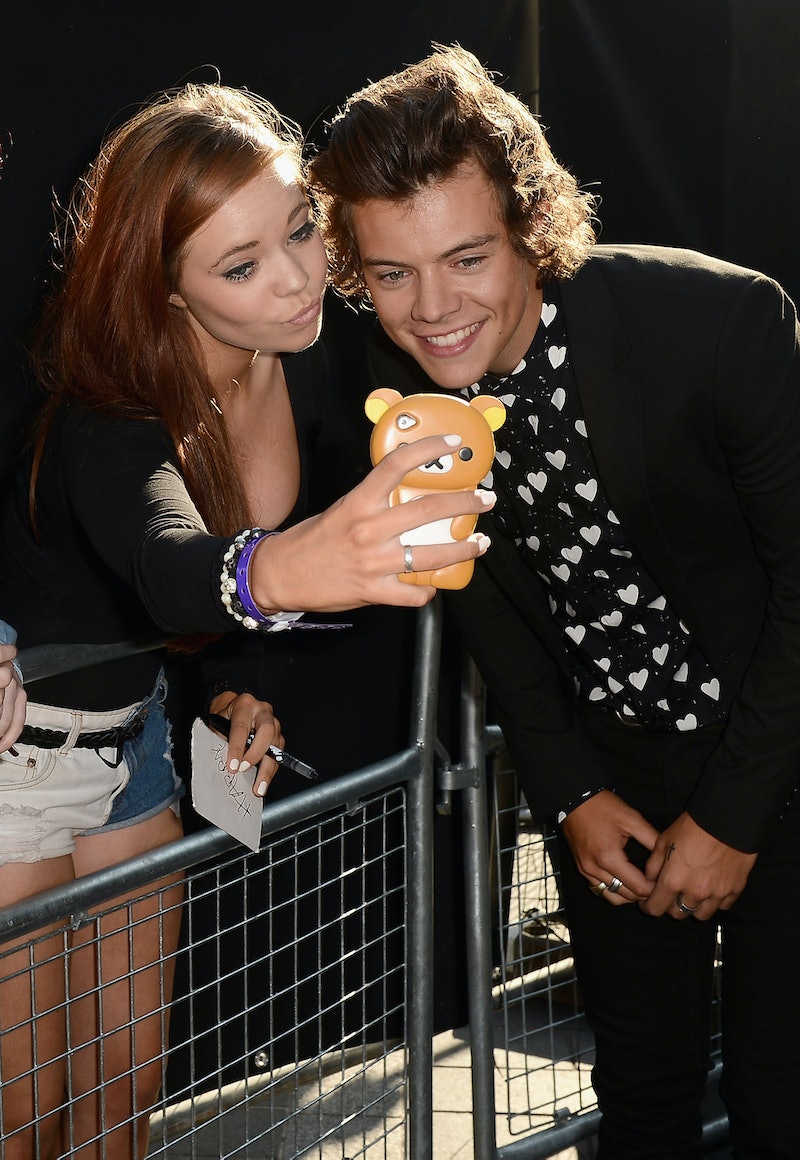 Anyone who has ever experienced a panic attack knows how terrifying and overwhelming they can be. Imagine all of that amplified by the anxiety and excitement and a million other mixed emotions that come with meeting your favorite singer or actor for the first time, and you can easily see how it feel like too much to handle. Which is exactly why the stories of celebs comforting fans having panic attacks is proof that the world is an actual heartwarming place and we are all just human beings, trying to help each other out. Yes, the sentiment is cheesy AF, but to the fan so overwhelmed by meeting their fave, having that person go above and beyond to help them out during an embarrassing and difficult time undoubtedly means the absolute world to them. And it's a reminder to all of us that we're all one and the same, comforting each other through life's difficult moments.

TBH, I imagine it's easy to quickly become jaded as a celebrity, someone who is so used to meeting adoring fans in their every day life. But these stars prove that fan interactions are never just routine for them, and they will attempt to comfort overwhelmed fans the best way they know how.

From Harry Styles to Angelina Jolie, check out a handful of celebs who helped their fans through panic attacks.

When one particularly dedicated fan met Harry Styles, she was so overwhelmed that she began hyperventilating and sobbing. He immediately walked over to her, took her arms in his, and made sure she was OK.

While at their Tulsa Sounds Live Feels Live tour stop, 5 Seconds of Summer frontman Luke Hemmings allegedly comforted a fan who had a panic attack while meeting the band.

When Christopher Warner — a 10-year-old boy with Down Syndrome and arguably Adam Levine's biggest (little) fan — met the singer, he was so overwhelmed by the moment that he had a panic attack and laid down on the ground to calm himself down. Levine promptly joined him on the floor and laid next to him during the moment.

In 2014, a fan named Techna became overwhelmed with the crowd frenzy while trying to meet Angelina Jolie outside of the Daily Show. The actor noticed that Techna was having a difficult time and rushed over to her, spoke to her for a few moments, and took a selfie, with the fan later shared — along with the story — on Instagram.

"Just to put it out there, I went there to the Daily Show with my Friend to get Angelina Jolie. We was practically in the back then went on the side in hope of getting her. Then the guards added another barricade. Chaos erupted to the point. I was getting squished to the point that I started to have a panic attack," she captioned her selfie with the star.

"She saw me struggling to the point that the security pull me out and sat down. Angelina didnt leave till she made sure I was ok," she continued. "Usually I have no problem with getting celebrities but it was too overwhelming for me since I have tone down in the last two months. Im not going to lie about my medical condition since this is something that rarely happens to me and I hope it doesnt happen again. But overall Thank You #AngelinaJolie I will remember this."

While speaking to the Supernatural stars at a fan convention, one fan started to panic while talking to the guys. The actors immediately enveloped her in hugs, practically diving off the stage in order to wrap her in a comforting embrace.

One Ed Sheeran fan had such a severe asthma attack during a show that the redheaded singer stopped performing and insisted that security help her out. While asthma attacks are not the same as panic attacks, they can be equally as severe and overwhelming (not to mention super dangerous). And it is clear from the video, which you can watch above, that the singer desperately wanted to go down into the crowd and help out himself, but security did not allow it.

Hats off to every single celeb on this list for not just going above and beyond for their fans, but for being human and for genuinely — genuinely — caring about their fans' well-being and comfort. It is endlessly heartwarming, to say the least.