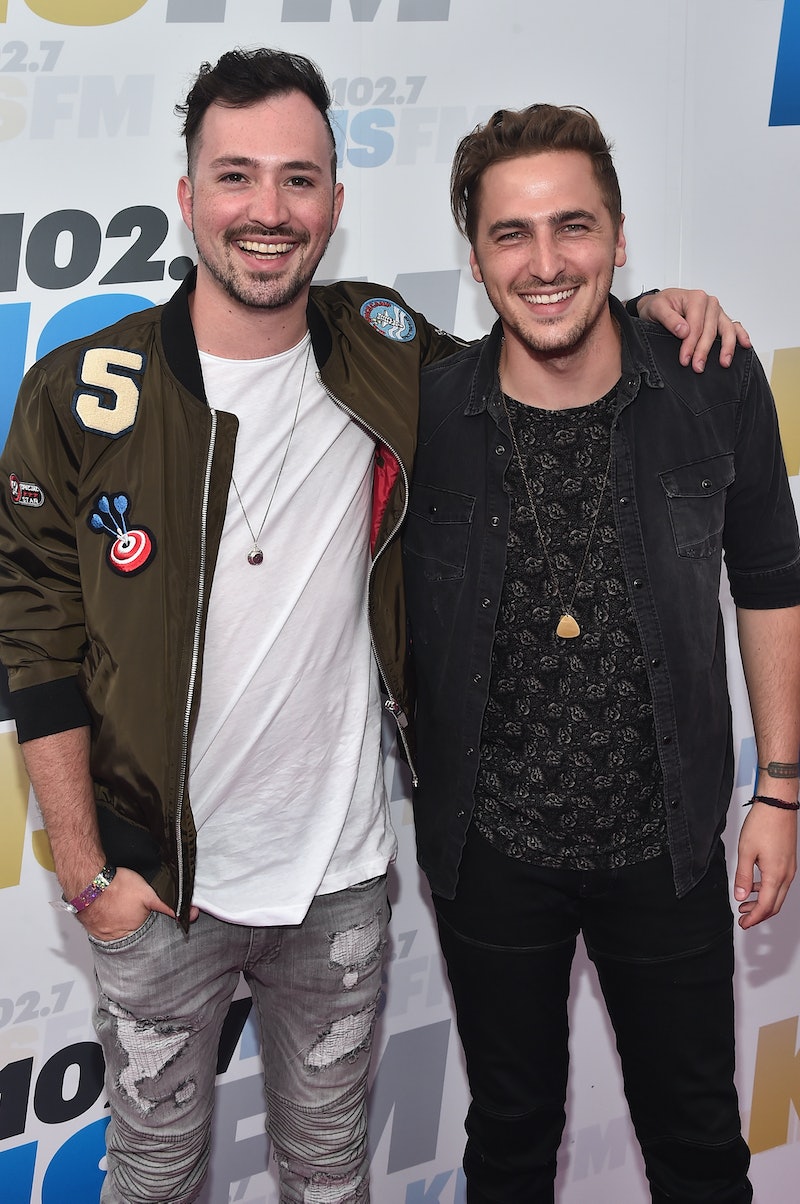 For Kendall Schmidt and Dustin Belt, Heffron Drive is cruising along pretty well. The band just completed a 16-date summer tour throughout the U.S. and Italy, are serving up a heavier electronic sound on their single "Don't Let Me Go," and are hard at work creating new music for their fans — and for themselves. So it makes perfect sense that right now Schmidt is looking forward to his future with Heffron Drive and also, possibly, to a reunion with Big Time Rush — he's totally down!

When speaking with the band about "Don't Let Me Go" (the first single they've released since their 2014 debut album, Happy Mistakes), what comes across is how proud the guys are of the song and of how their sound is "evolving." In fact, they reveal to Bustle that the track's chorus contains one of their favorite lyrics they've ever written: "You mean the world to me / I want the world to know."

"We just wanted to expand our musical horizons and try to do something a little different," Schmidt tells me via phone. "With every new song we try to be as different as possible. That's the beauty of having a band like this ... You can just make music freely, what you want to hear." They say they're "constantly working on new material" on the road and plan to dive in headfirst and finish their sophomore album once they get back to L.A.

Belt says their sound is "evolving," and explains, "It’s gonna be a little more indie rock. Because it’s where we come from. There’s more guitars ... It’s definitely going to have a different feel but still that Heffron Drive sound."

And while things heat up for HD, Schmidt is simultaneously looking at his boy band past. In fact, just several days prior to the interview, #StanBigTimeRush was trending on Twitter, with the former Nickelodeon star himself even tossing his own hat into the ring and tweeting the hashtag. It was a heartwarming moment for Schmidt to see that fans are still going just as hard as ever, considering that the band went on an indefinite hiatus in 2014

"Well, to be truthful I was flattered. I thought it was very cool," he says. "We spent a lot of time and energy in the band, working very hard. The whole boy band thing wasn't really happening at the time — and we really brought it back."

As for reuniting as a group, Schmidt says he is all about that #ReunionTour life. "Whenever I see fans getting excited about it and there's an opportunity to get back together, I’m all for it. I know for sure it would involve a tour. I don't know if it would involve new music," he says. "It’ll take a little finagling, but I think, at some point, we'll come up with something."

And speaking of Big Time Rush, Schmidt is also getting ready to take on the role of "Uncle Kendall" to Carlos and Alexa PenaVega's unborn baby boy, noting that fans on the road have already given him a suitcase-worth of gifts to give to the PenaVegas' baby-to-be.

"Carlos actually called me when they first found out. And he said, 'Are you ready to be an uncle?' And I was like, 'No, what are you talking about?'" Schmidt says. "And he was like, 'Oh, we’re having a baby!' And I thought that was really cool. I’m so stoked about it. They’re going to be great parents."

"I’ve known it was a boy for a while but I didn’t know the name [until recently]," he says of his former bandmate's decision to name his son Ocean King. "I think it’s a really cool name."

For now, Schmidt is busy looking ahead at what the future holds: with Heffron Drive, with Big Time Rush, with his acting career ("I'm always trying to put together my own ideas," he says, explaining that he's focusing more on "creat[ing] parts" for himself with his connections rather than auditioning for specific roles), and admiring the incredible legacy that BTR has left in its wake. Like the fact that they paved the way for the next generation of boy bands (in case you forgot, One Direction spent an entire tour as BTR's opening act), and the fact that their fans are just as loyal and as passionate as ever.

After all, Schmidt has an entire suitcase full of onesies and baby fedoras to deliver to his old bandmate — maybe on that eventual reunion tour.