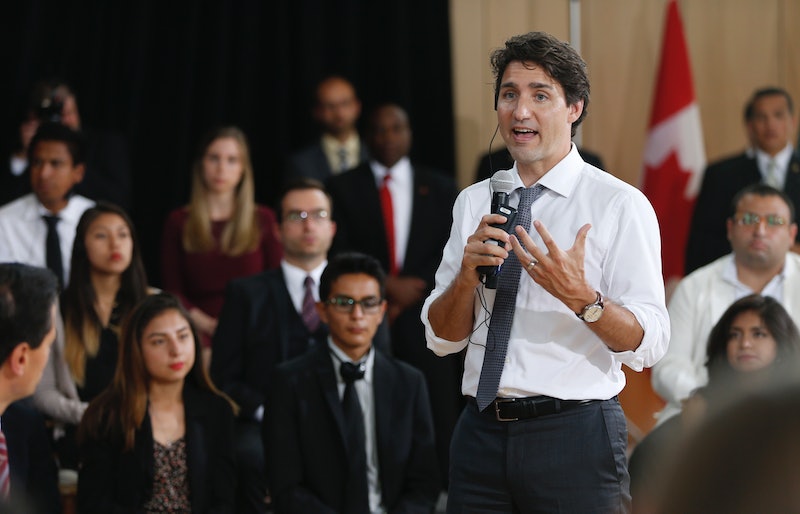 Canadian Prime Minister Justin Trudeau said earlier this year that identifying as a feminist shouldn't get the reactions that it does, that he simply believes in equality. In an ideal world, Trudeau would be right to say that his remarks about feminism should only be met with a shrug — but as he also knows, we have a lot of work to do to ensure that feminism achieves its goals. So in the meantime, it's critical for men to continue openly identifying as feminists, and Trudeau has certainly had some great feminist moments to prove he's already on board.

In fact, Trudeau has made history several times, making some Americans wonder why they don't live in Canada in light of Donald Trump's presidential bid. For example, Trudeau was the first prime minister to raise the pride flag on Canada's Parliament Hill. He was also the first sitting prime minister to march in a Pride parade. But while Trudeau has made headlines for everything from his goatee to his awkwardness around other world leaders, his feminist actions are not something to shrug at, no matter what he says. It is important for people in positions of power to live and breathe feminism, so let's take a look at seven of Trudeau's best feminist moments.

1. Encouraging Men To Identify As Feminists

Earlier this year, Trudeau discussed feminism at the World Economic Forum in Davos, Switzerland, during a session about gender equality. Trudeau made it clear that he identified as a feminist — which he had done many times in the past — but he didn't stop there: He also urged other people to identify this way. "We shouldn't be afraid of the word 'feminist,'" Trudeau said. "Men and women should use it to describe themselves anytime they want."

The Canadian prime minister added that feminist work shouldn't fall entirely on women's shoulders. "That role we have, as men, in supporting and demanding equality, and demanding a shift, is really, really important," Trudeau explained.

In April, he also made a Snapchat video telling men how they could start being better feminists. "There's lots of things you can do to be a better feminist as a man but here's a simple one: don't interrupt women, and notice every time women get interrupted in conversation," Trudeau said in the video.

2. Treating Poverty As A Feminist Issue

Trudeau and other world leaders recently received a letter from the ONE campaign, which was co-founded by U2's Bono to combat extreme poverty. The letter, entitled "Poverty Is Sexist," urges world leaders to acknowledge and combat poverty's disproportionate impact on girls and women around the world. Trudeau responded by joining the social media campaign, and in a letter of his own, he wrote that "women and girls are less likely to get an education, more likely to be impoverished, and face greater risk of disease and poor health."

"On behalf of the Government of Canada, I am writing you back to know that I wholeheartedly agree: poverty is sexist," Trudeau added. He urged other countries to follow Canada's example, and reiterated that he identifies as a feminist.

Over the past few decades, more than 1000 indigenous women and girls in Canada have either been murdered or have gone missing. Activists and First Nations leaders had been calling on the country's government to do something about this for years, and in 2015, Trudeau responded to their demands by launching a long-awaited inquiry into these disappearances and murders. "The victims deserve justice, their families an opportunity to heal and to be heard," Trudeau said in December. "We must work together to put an end to this ongoing tragedy."

This is an important feminist issue; feminism that does not include indigenous women is not real feminism. According to The Guardian, 16 percent of all women murdered in Canada are indigenous women, even though they make up just 4 percent of the country's female population.

When at least 15 towns in France outlawed the burkini — a swimsuit typically worn by Muslim women that covers the whole body except one's face, hands, and feet — Trudeau ruled out the possibility of a similar burkini ban in Canada. After a recent meeting with his ministers, Trudeau encouraged people to move past tolerance and toward acceptance and respect for individual freedoms.

"We should be past tolerance in Canada," Trudeau said. "Tolerating someone means accepting their right to exist on the condition that they don't disturb us too, too much. In Canada, can we speak of acceptance, openness, friendship, understanding? It is about where we are going and what we are going through every day in our diverse and rich communities."

5. Making Half Of His Cabinet Female

In 2015, for the first time in Canada's history, Trudeau introduced a 30-person Cabinet with equal numbers of men and women. Upon making this announcement, he told the public that he was proud to "present to Canada a cabinet that looks like Canada." When he was asked why having gender equality on his Cabinet was so important to him, Trudeau had a simple answer: "Because it's 2015."

6. Talking About Being Raised As A Feminist

During an Up for Debate seminar on women's issues last year, Trudeau — who was born during his father's time as Canada's prime minister — talked about how his upbringing had inspired his political and social views, especially his feminism.

"My mom raised me to be a feminist," Trudeau said during the debate. "My father raised me, he was a different generation but he raised me to respect and defend everyone's rights, and I deeply grounded my own identity in that, and I am proud to say that I am a feminist."

Earlier this year, on International Women's Day, Trudeau announced that a Canadian woman would be featured on the first bill of the next series of Canadian banknotes, which are expected to roll out in 2018. Neither the prime minister nor the Bank of Canada specified which bill would feature a Canadian woman, according to CBC News, but the process for choosing which woman to feature is already underway.

"Today, on International Women's Day, the Bank of Canada is taking the first step by launching public consultations to select an iconic Canadian woman to be featured on this new bill," Trudeau said at the time of the announcement.

Canadians had an opportunity to nominate women until mid-April, and the Bank of Canada has since long-listed 12 women who met its qualifying criteria. The list includes artists, activists, suffragettes, athletes, and indigenous women.

Like any politician, Trudeau isn't perfect, but he is certainly setting an example for how men should talk about feminism. These are just seven of Trudeau's many feminist moments, but they remind us that feminism must be intersectional, nuanced, and not just women's responsibility.