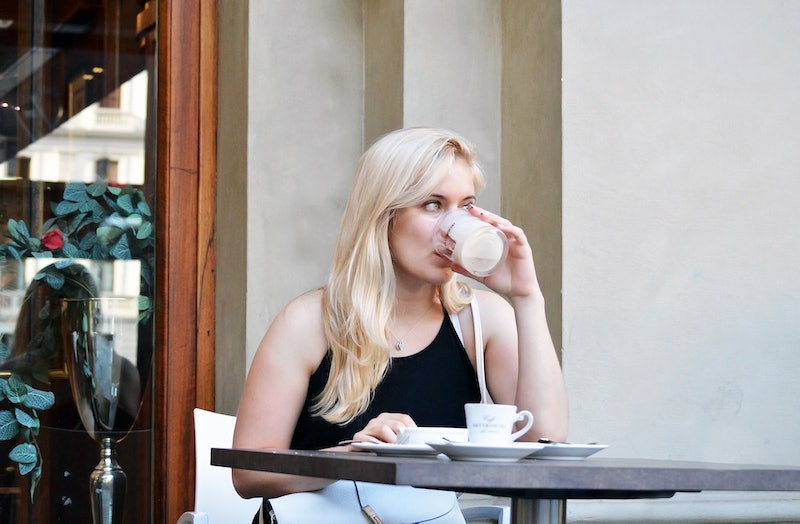 Nothing is worse than tossing and turning all night, only to wake up feeling lethargic and cranky. Instead of loading up on coffee and pressing snooze a million times, there are other, healthier ways to recover from a night of bad sleep that will leave you feeling more awake and energized. Just because you didn't sleep well doesn't mean you should have to feel miserable, but you'll want to keep up on healthy habits throughout the day to ensure you'll sleep well the following night.

"Following good sleep practices like a regular sleep schedule and wake times, and eliminating activities and behaviors that do not promote sleep like napping during the day can also help in ensuring you’re getting your best night’s rest," says sleep expert Dr. Teofilo L. Lee-Chiong Jr over email. "Healthy sleep requires prioritization, so don’t let one bad night’s rest deter you from your healthy sleep habits."

Nothing can make up for a night of deep, rejuvenating rest, but that doesn't mean you're stuck feeling miserable if you only got five hours. If you didn't get much sleep the night before, here are 11 ways to recover from a bad night's sleep the following day.

1. Avoid Too Much Caffeine

Enjoying one cup of coffee in the morning can definitely give you an energy boost, but try not to have more caffeine in the afternoon. "Consuming alcohol, caffeine, or heavy meals within four hours of your bedtime could be to blame for your poor night’s rest," says Lee-Chiong. "Making an effort to avoid these leading up to bedtime can help ensure a better night’s sleep."

It may be the last thing you want to do in the morning, but taking a cold shower can give you a jolt of energy. Getting splashed with cold water increases your breathing and overall oxygen intake, which in turn increases your heart rate and blood flow, leaving you energized, says to Medical Daily.

"Poor sleep often leads to dehydration," says sleep doctor Michael Breus, PhD over email. "This is due to people being up longer and using up the reserves of water that they have." Even mild dehydration can lead to fatigue and problems focusing, according to a study from the Journal of Nutrition, so keep some water with you at all times.

"Get direct sunlight for 15 min when you wake up," says Breus. "It helps reset your clock each morning, and this can be helpful after a poor night's sleep. Light has been shown to stop melatonin production, which is what would still go on in the morning after night of sleep deprivation." Exposing yourself to natural light can help boost your levels of serotonin, which is linked to more positive mood and higher energy levels, according to Columbia University.

You won't want to overexert yourself doing too much exercise, but a brisk walk can help you feel revitalized without leaving you overly exhausted. A study from the University of Georgia found that low-intensity exercise can reduce fatigue by 65 percent.

"Focus on eating healthy proteins and whole grains, such as avocado, egg whites and chicken," says Cara Walsh, Registered Dietitian for Medifast California over email. "Sugar may seem like a good idea, but it will only give you a temporary boost, and will come followed by a crash."

7. Put On An Upbeat Playlist

If you feel yourself drifting off, but on some upbeat music that you enjoy.

The rhythms and tempo of music can energize lagging attention levels, according to Johns Hopkins University. Your body eventually syncs up to the tempo of the music, so put on something pleasant and energizing.

Deep breathing can increase your oxygen flow, which can improve your energy levels, according to Real Simple. Whether you're at your desk, on the couch, or on your daily commute, you can breathe in deeply to help you feel more awake and even lower your stress levels.

If there is ever a time to procrastinate some of your errands, it's when your body needs the rest. "Try to take time one to two hours before bed to wind down from the day," says Lee-Chiong. "Try to avoid exercising, getting into an argument, or worrying about something as you’re preparing for bed."

Most of us play on our phones or watch Netflix before bed, but if you want to avoid another bad night's sleep, you'll want to shut off the electronics. "Try to disconnect from the ‘24/7’ pressures of technology devices like smartphones, tablets, computers, televisions, and gaming systems," says Lee-Chiong. Phones, computers, and other devices can mess with your body's hormones, including melatonin and cortisol, and lead to problems drifting off and poorer quality sleep, according to WebMD.

11. Try Not To Sleep In The Following Day

Try to stick to your regular sleep and wake schedule, as going to bed too early or sleeping in too late can mess with how you feel the next day. "Your circadian rhythms are set, and going to bed earlier or later will throw that off," says Breus. Instead, aim to get a solid eight hours of sleep starting closest to your normal bedtime.

"If you’re finding that you’re consistently having a hard time sleeping through the night, talk to a doctor, as you may have a sleep disorder that needs to be addressed," says Lee-Chiong.