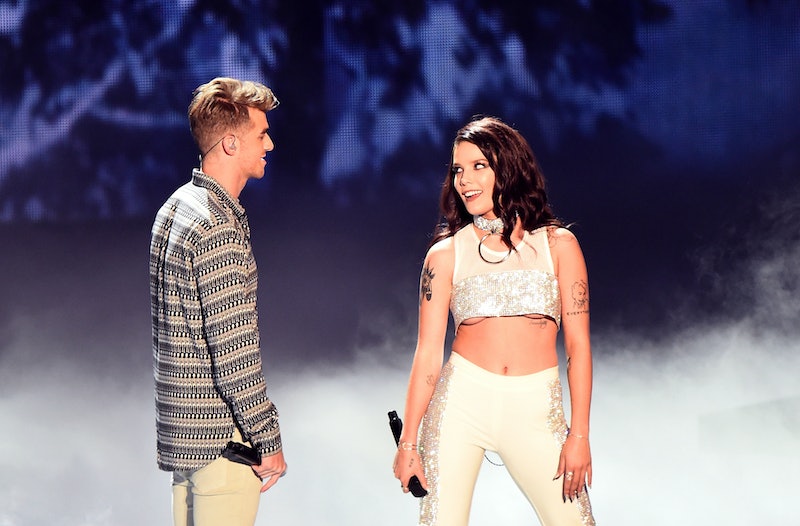 Even if you haven't listened to The Chainsmokers or Halsey extensively, I'd put money on you having heard their smash-hit together, "Closer." By the Chainsmokers and featuring Halsey, the song basically took over the radio waves this summer — something that was no surprise with its infectious beats and cool, sexy lyrics like, "So baby pull me closer in the back seat of your Rover/ That I know you can't afford," and "Pull the sheets right off the corner/ Of the mattress that you stole/ From your roommate back in Boulder/ We ain't ever getting older." I mean, poor roommate in Boulder, I'm sure it was a huge surprise for them to find their bed stolen from them... but whatever, great song. Because of their vibe, too, it's no surprise that those who sang the song — The Chainsmokers and Halsey — are performing at the 2016 MTV Video Music Awards.

If you were expecting a mellow, emotional performance from the group plus Halsey, good news: That's exactly what they all brought to the awards show on Sunday, when it was broadcast live from Madison Square Garden in New York City. While previous performers Rihanna, Beyoncé, and Britney Spears brought the edginess, the slay, and the heat, respectively, the Chainsmokers and Halsey brought the feels with their performance of "Closer": The chemistry between Halsey and Chainsmokers lead singer Andrew Taggart was palpable for pretty much the entirely of the song, particularly as the duo repeated the lyric, "We ain't never getting older" while moving extremely close to one another. It's like the two were meant to duet.

As of now, "Closer" is the number one song on the US Billboard Hot 100, above artists like Drake, Adele, and Rihanna. After watching this performance, I can't say I'm surprised.