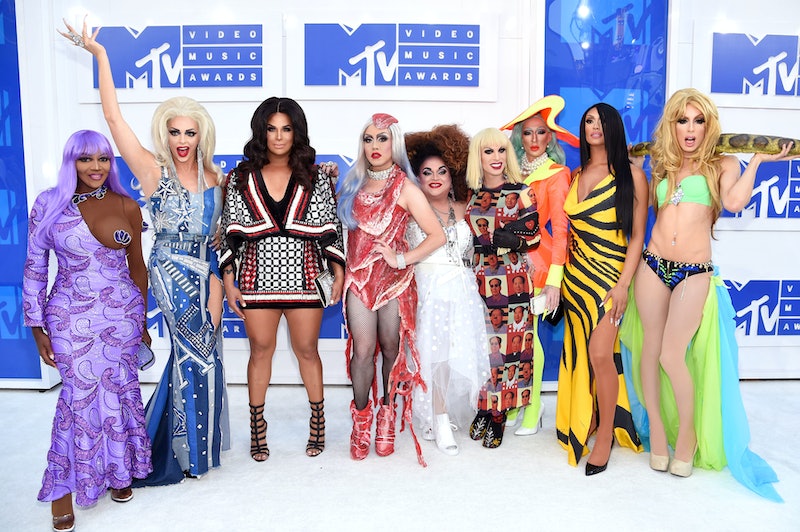 If anyone can pull off a crazy VMA look, it's the queens of RuPaul's Drag Race. And that's just what they're doing. The cast of RuPaul's Drag Race at the 2016 VMAs arrived on the Aug. 28 red carpet wearing arguably the most iconic looks in VMA history. I'm talking the unforgettable ensembles from celebs like Kim Kardashian, Britney Spears, and Lady Gaga. When it comes to this super fun awards show, they all totally nailed the outfits from MTV history.

If you're not watching RuPaul's Drag Race or Ru Paul's Drag Race Allstars, it's time to stop everything you're doing and sit your butt down for one very long marathon. These queens not only sing, dance, read, impersonate, act, or do their makeup flawlessly, but they even create their own looks for each challenge. That means they have to not only be handy with what they've got, but they have to have the confidence to pull it all off. And trust me, they all do.

This year, contestants of RuPaul's Drag Race showed up to the VMAs red carpet in Spears' iconic snake look, Kim K's Balmain one from the 2015 VMAs, Lady Gaga's unforgettable meat suit, and, of course, Lil' Kim's purple jumpsuit and nipple pastie. And the outfits are giving me major nostalgia and plenty of laughs.

I spy with my little eye a little Britney Spears action.

All in a line, these ladies look fabulous.

The VMAs are known as a night of fun, so the red carpet looks can be a bit more relaxed and silly than, say, the Oscars. Case in point: Gaga's meat suit. Seriously, never forget. This is definitely a more casual awards show, so the stars are more likely to take some crazy risks. And boy, do those risks pay off.

These looks are so good that they may even be more iconic than the originals. Congratulations, girls, you've definitely won best-dressed in my eyes.