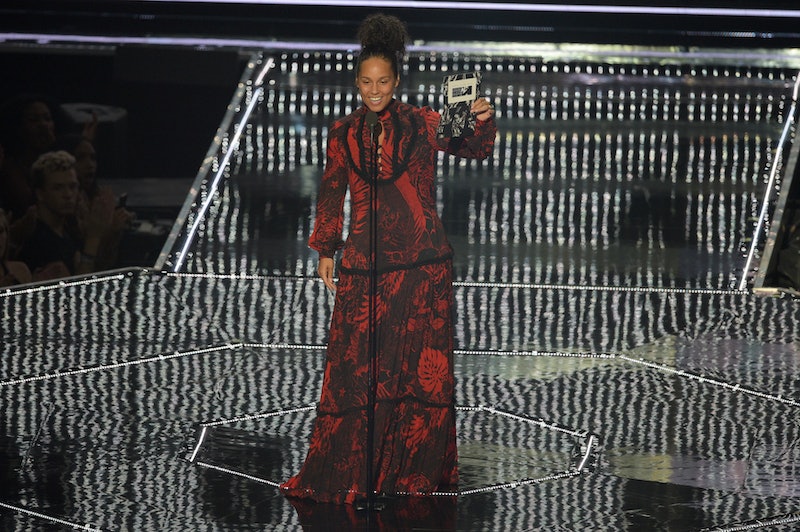 When Alicia Keys took the stage to present the award for Best Male Video, that's not all she presented. With the time she had on the 2016 MTV VMAs stage, Alicia Keys recited a poem for the 53rd anniversary of Martin Luther King Jr.'s "I Have A Dream" speech, and it was absolutely breathtaking. The poem, which appears to be an original one, if not the verses of a song she might drop very soon (I hope), was half-spoken and half sung by Keys. I don't think there are even words for how beautiful it was, you guys. The singer got a standing ovation from many of the other celebrities, and closed with the powerful statement that, "I still believe in that dream that one day our nation is going to rise up and finally, finally be completely about the true meaning of this creed that all women and men are created equal." Like, OK, Alicia Keys, I was trying to get through this night without sobbing, but I guess not.

So what did she say? Well, the poem appears to have a message of peace, begging people to stop focusing on the things that make them different and instead focus on the things that make them human. It calls for an end to walls and boundaries and war, to be replaced with peace and hope and love instead. If you only have a certain amount of time on that stage, Keys has just shown you how exactly to make that time count.

If war is holy and sex is obscene, then we got it twisted in this lucid dream. Baptized in boundaries, schooled in sin, divided by difference, sexuality, and sin. Mm, so we can fear each other, hate each other. We can break these walls. We can build these walls between each other. Baby, blow by blow and brick by brick. Keep yourself locked in, yourself locked. Oh, maybe we could love somebody. Maybe we could care a little more. Oh, maybe we could love somebody instead of polishing the bonds of holy war. Thank you.

I don't speak for MLK or anything, but I hope that he would be proud of what Keys has done tonight. Of all the things that people can choose to talk about from tonight's MTV VMAs ceremony, I hope that this makes the list, because it is, to me, one of the most important things to happen tonight. Not only was Sunday night's ceremony a celebration of excellence in music, but it was also a showing of excellence in humanity and morality as well. To think that Keys might have written this poem, or had this poem commissioned just for the chance to say it on the stage tonight in honor of MLK, is really, truly cool.