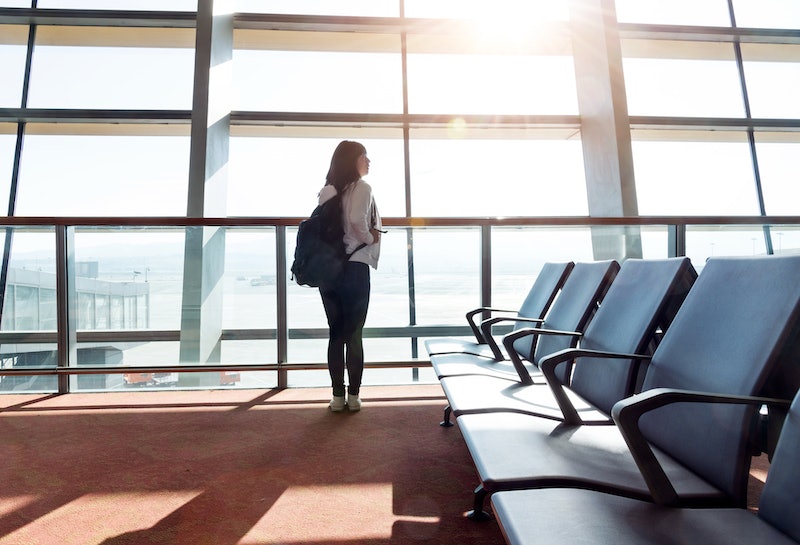 It's nearly the end of the summer holiday season, which, for some of us, means the end of the possibility of flight chaos: delays, cancellations, inexplicable reroutings, or (as was the case in my flight from the Czech Republic last week) an airline having to "steal" a spare plane because the original one broke. Once the terror of the "FLIGHT DELAYED" rolling warning on the airport departure board wears off, though, it's important to know your rights as an airline passenger. And, as we'll discover, many of your particular rights to compensation and care by airlines depend on your location, the length of your flights, the airline's own policies, and a bunch of other factors. It's a pretty complicated situation, so I've set out an easy guide to the basics on What You're Entitled To In Case Of Airport Difficulty.

I should know; if you name a flight disaster, I have had it. I've been delayed for eight hours after a plane wing nearly fell off, inexplicably stranded in Madrid, left without any spare clothing in New York in winter, and delayed in most of the world's major airports. Airlines may well duck when they see me coming. But there's one rule that you should always observe in the case of travel disasters: the people behind the desk are people, and are likely trying to do their best to help you, along with 143 other people who were also on your flight and have been inconvenienced. Being kind to them doesn't cost anything, and may be the difference between getting a quick flight home and being forced to sit in an airport overnight with only one food option. Pack your manners as well as your toiletries, guys.

Here's your quick guide to the your legal rights in cases of flight delays, cancellations, overbooking and missing luggage; but in every case, you should check your airline's own policies before you fly.

American law on delayed flights, according to the Department of Transport, is unfortunately not really consumer-friendly. A lot of it depends on the individual airlines; the cheaper ones will likely not make much provision for people on delayed flights, while more expensive ones might give meal vouchers or some kind of token compensation, but it's a good idea to check before you fly. On-the-tarmac delays are a bit different; if, for some reason, your plane is grounded with everybody aboard, the airline has to provide food and water within two hours of the delay, and keep their toilets functional. In the case of domestic flights it's usually illegal to remain on the tarmac for over three hours. Some airlines, the Huffington Post explains, have a policy to transfer you to another carrier to get you to your destination on time, but others try to give you a seat on their own next available flight.

European law's a bit different. If you're departing from any EU airport or arriving in the EU with an EU airline, the EU has strict guidelines on compensation: if the delay's over five hours, you're entitled to a full refund of your ticket, though if you take it the airline doesn't have to help you any further. If you arrive more than three hours late at your destination, you're entitled to set compensation, depending on where you took off and how long the flight was; for example, a flight from Paris to Sydney that went over the limit would give you 600 euro, because it would be over 3,500 km. For delays over 2 hours, the EU mandates that your airline has to make meals available for free, and for overnight delays, they need to give you accommodation and transport to and from the airport.

This sucks. There is no way around it. And because, again, there are no federal regulations on what an airline in America has to do in these situations, you're largely left to the whims of their individual policies. USA Today points out that, at the very least, airlines will offer on one of two options: either they'll refund you the unused portion of your ticket (so if you're flying from Madrid to NYC via LA and the NYC-LA leg gets cancelled, that's the only bit you'll get refunded), or they'll put you on their next available flight. They'll also have individual policies on whether people on cancelled flights get free phone calls or food, but those often only apply if the cancellation is within the airline's control, like an engine failure, and not a hurricane or terrorist attack.

The EU is, again, a bit stricter: unless the hurricane/terrorist attack problem occurs, they maintain the three-hours-late law that they do for delays, where compensation depends on where you're going and the length of the flight. They also mandate that passengers have to either get a refund within seven days, a return flight to the point of departure, or another route to their final destination. But European law gives the airlines an out, as the Huffington Post explains: if they notify you of the cancellation more than two weeks in advance, or within one to two weeks with a rerouting option within four hours of your original arrival time, or within one week with a rerouting option within two hours, then they don't have to pay up. Yes, that is just as complicated as it sounds.

Contrary to what you might believe, overbooking a flight — selling more seats than are actually available — isn't illegal, and is actually pretty common. If everybody who's booked turns up for the flight, though, the airline has a problem, and tends to solve it by "bumping": rejecting passengers so that they have to take the next available flight. Independent Traveller points out that there are actually significant advantages to volunteering for being bumped if you're not in a hurry, as airlines often express their gratitude through vouchers, upgrades, or admission into airline lounges.

If you're bumped involuntarily in the U.S., the Department of Transport mandates that the airline has to take care of you: if they organize you alternative transport that makes you 1-2 hours late (1-4 for international flights), they have to pay you 200 percent of your fare; if it's even later than that, or they can't make arrangements for you, they have to pay you 400 percent. There are ceilings on those figures, though ($675 and $1350, respectively). Also, if the airline offers you a free ticket and you'd prefer money, you get to insist on that if you want.

The EU's regulations are less labyrinthine: if you're bumped involuntarily, or can't agree on your specific arrangement with the airline once you've volunteered, then you're entitled to the same treatment as if your flight had been cancelled (a full refund or another route to your destination). The difference is that, for bumping, airlines have to provide this within seven days.

In this case, U.S. travelers get more leeway: if you file a claim in the U.S. for lost or damaged luggage, Conde Nast Traveller explains, you're entitled to up to $3,300, while the Montreal Convention for claims filed elsewhere in the world only entitles you to $1,750. But getting that amount can be very tricky; many airlines, Independent Traveller reveals, refuse responsibility for things like expensive jewelry or family heirlooms in checked baggage, and proving the worth of what you were carrying without receipts can be extremely tricky. There are also strict regulations about how soon you have to file a claim, sometimes within seven days.

If you are traveling with something highly valuable, it's generally a good idea to have it covered by your insurance or declare it at check-in; United, for example, has an "excess valuation" system where it accepts baggage of a value up to $5,000, but it's quite complicated and the airline won't just take your word for it. When it comes to delayed luggage, every airline has a different policy, but the Department of Transport demands that all of them provide at least some money per day for travelers to afford essentials (like underpants) while their stuff is located. And this is why I recommend that you always, always, travel with a change of clothes and toiletries in your hand luggage. You may think it will never happen to you, but then you'll be on holiday with nothing but your dirty jeans and one pair of socks till they find your suitcase in Iceland.