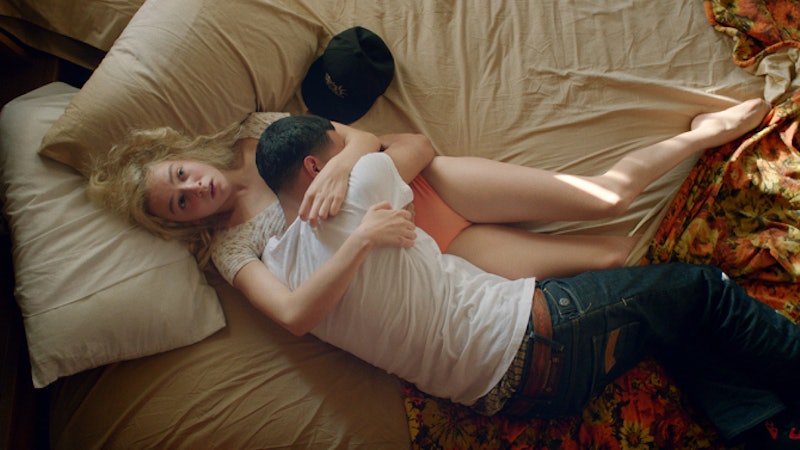 There are few movies that come along that dare to show young adult life in a gritty light, one that's much darker, if slightly more accurate, than most adults want or care to admit. Movies like Thirteen, Kids, and Spring Breakers often shock audiences and make them wonder: "does this stuff really happen?" And although they're fictional, these movies are generally rooted in some kinds of hard truths — which is exactly what Elizabeth Wood's new film, White Girl, tries to expose. The new film, out Sept. 2, is filled with sex, drugs, and painful realizations about young adulthood, whiteness and privilege, and in actuality, White Girl is a true story — one loosely based on Wood's life.

The film stars Morgan Saylor as protagonist Leah, a college girl who is new to New York City, falls in love with a "bad boy," and dares to go to extremes to get him back. In an interview with Refinery29, Wood said that "[White Girl] is based on a real story. It’s not my biopic." She didn't expand on just how much of the story is truth and what's been fabricated for screen, but it's clear that White Girl is far from a simple piece of fiction. In fact, it might be one of the year's most talked-about tales. As Wood explained to Refinery29, "some people see the film and are kind of shocked by the sex and drugs that they don’t realize this is a film really more about race and gender than sex and drugs." Essentially, it seems that Wood wants her film to spark the kind of heavy conversations that most people don't want to have.

In an interview with W Magazine, Wood suggested that the title, another name for cocaine, should illicit a strong response. "Yes, this is a film about whiteness and being a woman, and yes, white girl is another term for cocaine," she said. "For me, calling it that was a way to say, 'Let's f---ing talk about it." Wood is clearly a no-holds-barred, directorial badass who isn't afraid to go there, and to me, that's pretty refreshing. But White Girl is about more than just the outward sexuality and drug use, nudity or scandal. It's about romance, too, as Leah comes to the city and falls in love with Blue, played by Brian Marc. While it could be very easy to say that Blue, a drug dealer, corrupts Leah without any real love shared between them, I don't agree. And neither does Wood, as she explained in the same Refinery26 interview:

...it’s very sexist of men to think that a female’s experience in falling in love isn’t very sexual. We’re not so different than guys. Also, young romance is not as romantic as anyone would like to portray in a movie, especially in the last couple million years. I find [Leah and Blue's relationship] to be very romantic and full of romance. I don’t think they’re equipped to deal with real love, and I think this is a Romeo and Juliet story where they’re kept apart really by the system at large. In this moment there’s no way they can be together, even if they want to be. There is actually no room for their love; things are just keeping them apart.

So yes, White Girl is based on a true story, one that chronicles a summer of love, drugs, and sex. But its intention is for audiences to look beyond those subjects and see the greater conversations that need to be had about the hard truths experienced by so many teens today.