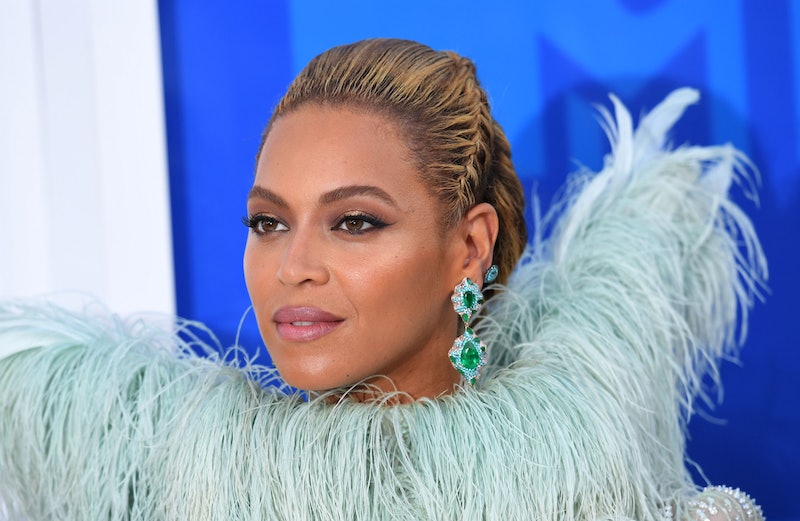 Whether you're really famous or just a regular person, when it comes to meeting Queen Bey, we all react the same. During Sunday's 2016 MTV Video Music Awards, Beyoncé surprised Chance the Rapper in the middle of his backstage interview with MTV. While Chance was chatting with MTV anchor Meredith Graves about Drake (because what else would anyone be talking about?), Beyoncé walked up to the 23-year-old rapper, gave him a quick hug, and then casually walked away. After registering what just happened and who just touched him, Chance reacted basically how every normal person would react when coming in contact with Bey. In other words, he freaked out with excitement.

"Oh my God, that was 'Yonce," he exclaimed while looking after Beyoncé. Then, like how pretty much everyone else would, he ran over to her. She was all smiles and greeted him with open arms. The Lemonade artist even walked over to introduce herself to Graves. She really couldn't have been sweeter and kinder. So, not only did she make Chance's night, but I have a feeling Graves' evening also improved after meeting Queen Bey, who even complimented the anchor's tattoos. Once again, the 34-year-old singer shows why she is beloved by all.

After having a mini-freakout over the encounter, Chance danced around and declared, "This my life." Yes, it is and every Beyoncé super-fan is extremely jealous of Chance right now.

To make sure you really understand how excited Chance was by Beyoncé's videobomb, pay attention to the following gif. It really says it all. He went from confusion to shock to excitement, all in the matter of seconds. Also, take note of Bey's sly smile. She knows just how fabulous she is in this moment.

Only Beyoncé has the ability to make someone react like Chance the Rapper in this situation. It's one of her many superpowers.