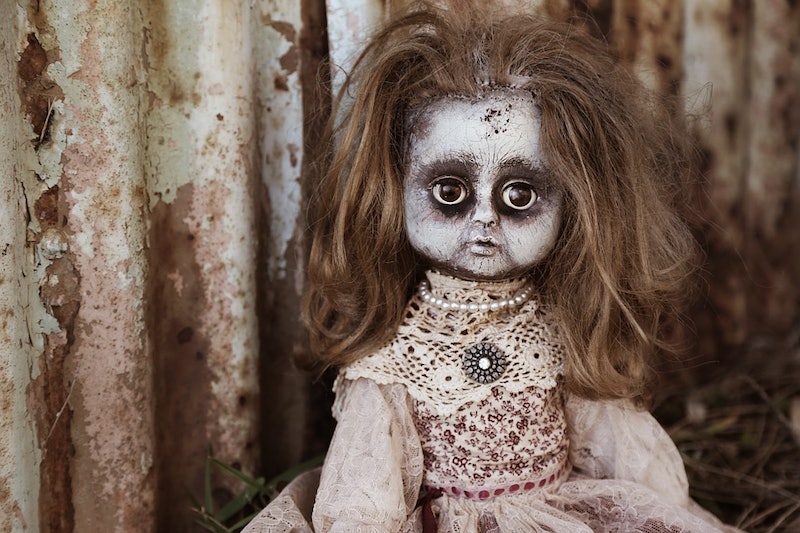 A lot of people believe that nothing is scarier than a clown — but if anything's going to send shivers down my spine, it's dolls. They're meant to look human... but they don't, their distorted features instead making them appear cartoonish. (And don't even get me started on talking dolls.) To make matters worse, stories of haunted dolls have circulated for years, putting a definitive end to my relationship with the toys I loved playing with as a kid. No more. No more.

I think it's the fact that these inanimate objects seem so innocuous that makes them so freaky. A doll with eyes permanently open, a smile forever plastered across its face... Nothing this cheerful could ever be capable of evil, correct? Au contraire. Dolls can be the most sinister of them all. Just ask Chucky. Just ask that little doll that Jigsaw used to deliver his messages. OMG. I can't go on.

And these are fictional characters! What about the real-life stories people have shared of haunted dolls that move on their own and cause unexplainable happenings? If you've got a doll in your home, beware. It could be the reason your furnace keeps breaking, your car won't start, and you keep losing bobby pins.

If you're really in the mood for something that's going to keep you up at night, read on about haunted dolls with their own scary histories.

Robert is the Kim Kardashian of the haunted doll realm — well-known by many. As a young child, Robert Eugene Otto (normally called Gene) was given Robert as a gift... and immediately, strange things started happening in the Otto household. Furniture would be overturned; toys would disappear and then come back (mutilated!); and Gene started having nightmares. Gene's parents would walk by his room and hear him giggling with someone with a deep voice.

The scariest part of all is that Gene had an explanation for this bizarre activity: "Robert did it." Robert was eventually put in the attic and kept there — but he'll never be truly silenced: During his exile to the attic, witnesses reported seeing a small figure moving around up there, and even hearing footsteps in the attic. If you ever get the chance to talk to Robert, pay close attention to his face: It's said to change expressions.

Robert the doll eventually became property of the Fort East Martello Museum in Key West, Fla., and the staff says he continued acting up — cameras and other electronics allegedly malfunction around him.

Mandy's story is nothing short of spooky. She's an antique porcelain doll that may have been created as early as 1910. At night, her owner would supposedly hear a baby crying in the basement; but when she went downstairs to inspect, all she found was an open window. Mandy was eventually taken to a museum, but her behavior didn't stop. Objects would go missing, sometimes to be found later on, sometimes not. Staffers' lunches would disappear. People would hear the sound of footsteps.

At one point, Mandy was locked alone in a room. A staff member came in one day to find papers thrown everywhere. Electronics malfunction in her presence, and visitors have reported seeing her eyes, fingers, and head move. She's even been known to tap on the case she's now kept inside.

While Mandy's act are certainly chilling, the doll — and whatever spirit may be possessing it — haven't been deemed evil. Paranormal experts have said it's merely the soul of a child that inhabited the doll, looking for attention and affection like any normal child would.

In 1970, a precious Raggedy Ann doll that became known as Annabelle was bought used from a hobby store by a woman, who gave it to her daughter, Donna, as a gift. Annabelle found great joy in making life hell for Donna and her roommate Angie, both nursing school students. The doll moved on its own, changing positions and taking itself from room to room. They also began finding strange notes on parchment paper around the house (something they never kept in the first place), appearing to have been written by a child. The notes would say things like "Help us" and "Help Lou." One time, Donna came home to find blood on Annabelle's chest and the backs of her hands.

Paranormal experts Lorraine and Ed Warren intervened, initially determining that it was the spirit of seven-year-old Annabelle Higgins possessing the doll; but they eventually learned that it was actually a demon posing as the girl, a demon that wanted to steal one of their souls. The Warrens held an exorcism, and the problem seemed to disappear. But after taking Annabelle with them, she proved to still be quite the troublemaker, so the Warrens ended up locking her up in a case.

If this story sounds familiar, you might remember it from The Conjuring, in which Annabelle had her own role. Her tale was intriguing enough to get her her own spin-off, aptly titled Annabelle.

In 1918, 17-year-old Eikichi Suzuki bought Okiku as a gift for his two-year-old sister. She loved the doll and played with it every single day. Sadly, she died the next year from a cold. Her family put the doll on the altar in their home and prayed to it daily, for their daughter. While the doll originally had short, cropped hair, it actually began to grow down to its knees. Some took this as a sign that the young girl's spirit was now inside the doll.

The family moved in 1938, and decided to leave the doll at the Mannenji temple, where it supposedly remains today.

I'm purposely excluding a picture of Peggy the doll, and here's why: Merely looking at photos or videos of this doll supposedly triggers threatening circumstances. Peggy's victims have reported chest pains, nausea, migraines, and even heart attacks after viewing images and video of the doll. They've even shared experiencing flashing visions of mental institutions, abusive treatment, and debilitating anxiety.

I refuse to look Peggy in the eye. So if you want to Google her... consider yourself warned.

Joliet brings pain to the family who has kept her for generations, but they will not let her go. Joliet was originally given to a women on her second pregnancy as a gift by her friend. Unbeknownst to her, the friend was jealous, and Joliet was cursed. The women gave birth to her child — a son — who died on his third day.

This pattern — having one daughter and one son, who would die on his third day — continued to present day, spanning four generations. Sounds of infants crying can be heard coming from Joliet, and the women of this family believe it is the voices of their deceased sons. For this reason, they refuse to get rid of this doll that's causing them so much pain. It's to protect their boys.