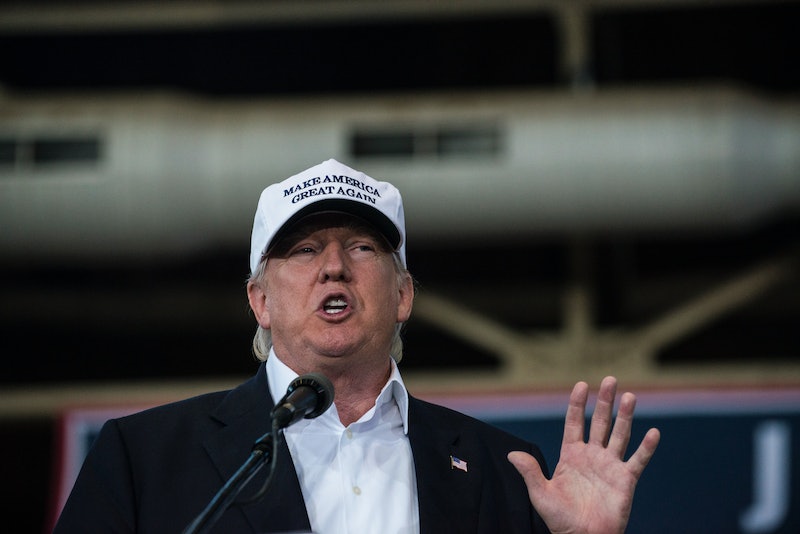 Never one to shy away from a buzzy topic — even if it doesn't involve him — Donald Trump commented on Huma Abedin's split from Anthony Weiner on Monday. The Republican presidential nominee proclaimed in a statement, "Huma is making a very wise decision. I know Anthony Weiner well, and she will be far better off without him." He then turned the split into a comment about his opponent, Hillary Clinton: "I only worry for the country in that Hillary Clinton was careless and negligent in allowing Weiner to have such close proximity to highly classified information."

Trump proceeded to imply that Weiner's reported latest bout of sexting was a reflection of Clinton's supposed dishonesty and lack of trustworthiness. "Who knows what he [Weiner] learned and who he told?" he said. "It's just another example of Hillary Clinton's bad judgment. It is possible that our country and its security have been greatly compromised by this." Regardless of how one feels about Clinton's use of a private email server while serving as secretary of state — and there is plenty to find questionable about what FBI director James Comey called "extremely careless" behavior — I am dubious that Carlos Danger's penchant for sending inappropriate photos of himself in various states of undress will compromise our national security.

Trump has tried to paint Clinton as a politician not to be trusted with sensitive national intelligence. He accused the former secretary of state of being "totally unbalanced" and "totally unhinged" at a rally earlier this month. Speaking of how Clinton said she "short-circuited" when making inaccurate statements about the FBI's review of her emails, Trump proclaimed, "Unstable Hillary, she lacks the judgment, temperament and moral character to lead this country." Back in May, Trump also said of Clinton, "She's as dirty as they come."

It's not wholly surprising to witness Trump attempt to link the Abedin/Weiner separation to Clinton's presidential campaign, but whether American voters buy into it remains to be seen.