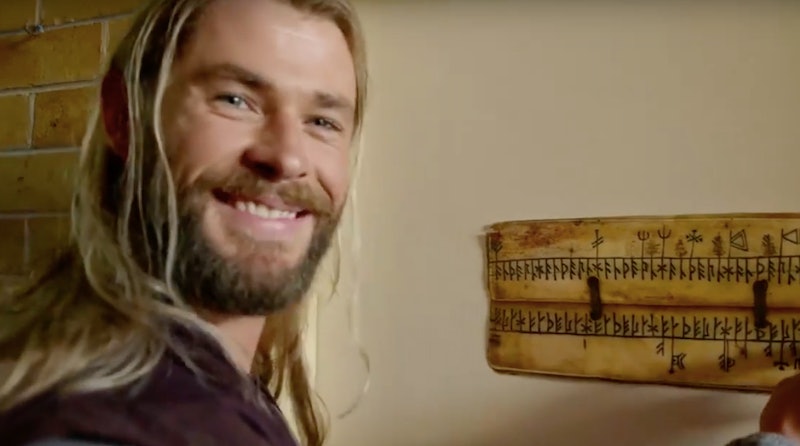 Everyone loves a little bit of Thor in their lives, right? The swaggerific Norse god is one of my favorite Avengers currently in the MCU, which naturally means I'm getting all sorts of excited for Thor: Ragnarok. Especially since Ragnarok may be Thor's final (somewhat) solo outing. Luckily, we can now see what Thor was up to while the Civil War between Iron Man and Captain America raged on.

As the MCU progresses into new phases, their universe continues to expand. This means that some of our favorite original characters (Iron Man, Captain America, and, yes, Thor) will be riding off into the sunset while we get to spend more time with newer MCU additions (like the Guardians of the Galaxy and Black Panther). With all of that in mind, this latest sneak peek into Thor's world offers some very exciting clues about what to expect from the third and final installment of his solo story.

In a featurette titled "Civil War: Team Thor," it looks like Thor took some time after the events of The Avengers to move away from New York and carve a more normal path in the world. This means moving to Australia, getting a regular roomie named Darryl, and putting together the pieces (who's who, what's what and so forth) of the MCU in his spare time. His biggest question is the one we viewers have been asking for a while now: What exactly are Infinity Stones?

There are some other brilliant revelations into Thor's life. For instance, Thor doesn't know how to send e-mails, so he asks Darryl to do it for him (ravens are always acceptable, too). He has also been practicing his culinary skills by roasting meat in his room in the direct sunlight for, er, weeks. Amusingly, Thor's trusty hammer Mjolnir needs to nap regularly. Best of all, Thor misses his Avenger friends, so he occasionally meets up with Bruce Banner (aka The Hulk) for a coffee and a chat.

This "Team Thor" featurette is illuminating for a few reasons. Not only do we get to take a fun, fictional look at what Thor has been up to in his spare time, we get a real sense of what to expect in Ragnarok. The short was directed by Ragnarok director Taika Waititi. This means the tone of the "Team Thor" featurette strongly resembles the mockumentary style and tone of Waititi's What We Do In The Shadows , down to the oil-and-vinegar roommates, the awkward pauses, and the supernatural protagonist. This style of filmmaking veers sharply from Joss Whedon and the Russo Brothers' more somber, relatively more dramatic tones in their own MCU films, The Avengers and Captain America: Civil War, respectively.

Thus, "Team Thor" brings up some interesting questions about how Waititi will make his mark on the MCU. Will Ragnarok be decidedly more lighthearted than other MCU films, more so in the vein of Guardians of the Galaxy? Will there be a mockumentary element to it? It's exciting to see Thor cast in a different light, at any rate. I enjoy the opportunities this small scale mockumentary offers in showing a more vulnerable, sillier Thor.

Even better, we get to see where Ragnarok will be picking up the larger MCU threads. While the first few phases of the MCU have been focused on setting up individual heroes and bringing them together for epic battles, we've only been given small clues as to what the over-arching and impending Infinity War will actually be. It appears that the "Team Thor" featurette is setting up Thor's eventual exploration into what the Infinity Stones are, who Thanos is, and how Thanos' plan will affect all the heroes of the MCU. Sure, it's shown in a rather amusing fashion, but we can safely say that Thor's third film will be getting a more cosmic look at the MCU.

It's already been revealed (or spoiled, depending on your view) that Doctor Strange may play a role in Ragnarok . If the next phase of the MCU, which includes Doctor Strange, Guardians of the Galaxy Vol. 2, and The Avengers: Infinity War, is going to have an intergalactic/cosmic scope to it while focusing more on the conflict with Thanos, then it stands to reason that this topic would get broached in Ragnarok and begin to incorporate those intergalactic characters.

It's been stated that Ragnarok will be partially set on Earth, but it will definitely be jetting off to different dimensions. Mark Ruffalo, who plays The Hulk, defined the film as an "intergalatic buddy road movie." It then stands to reason that the two Avengers who sat out Civil War will be meeting other MCU heroes under different circumstances, just as their Avengers teammates met new heroes albeit in the context of war. In this way, Ragnarok could very well be a big piece of connective tissue for Phase Three of the MCU.

No matter which way Ragnarok goes, I am so happy that "Team Thor" exists. I will be watching it on repeat for roughly as long as it takes to finish work on Ragnarok and release it in theaters. Send a raven if you need me, guys.