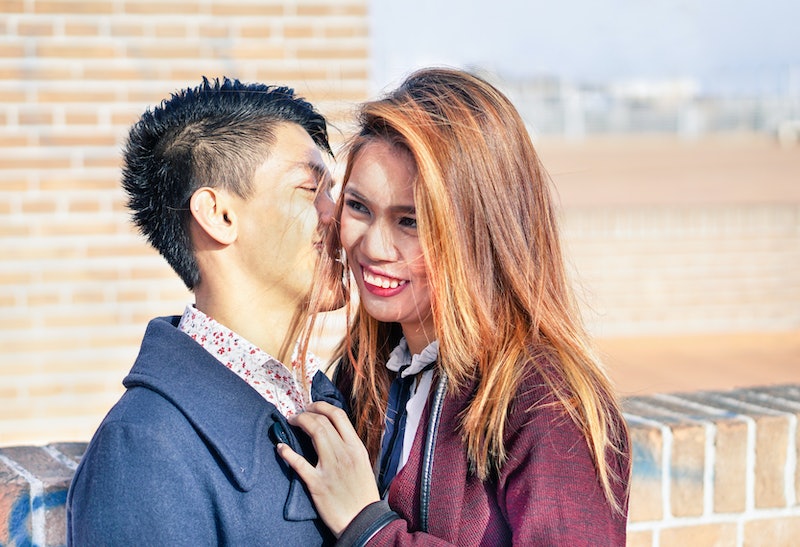 Lots of things vary from culture to culture, from food to dating conventions. And, apparently, so do pickup lines. To find out which pickup lines are most popular in which countries, the team at the language-learning app Babbel asked its in-house linguists from around the world what the most popular pickup lines are where they're from. As it turns out, how people use pickup lines can tell you a lot about a culture.

Let me just say that I for one am generally opposed to using pickup lines. If you want to talk to someone, just talk to them — no lines necessary. By telling somebody they look like they feel from heaven instead of, you know, asking them about their interests, you're not exactly forging the most genuine connection.

But while I may not endorse pickup lines, it can still be fun to look at what hilarious and sometimes outright ridiculous ones people are using. Here are a few of the most-used pickup lines in different countries — and what they say about the people there.

France: “Est-ce que tu crois au coup de foudre ou dois-je repasser ?” (“Do you believe in love at first sight, or should I walk by again?”)

This line, which implies that the speaker can get the listener to fall in love with them, is typical of the confident French, Babbel's French linguist Pauline tells Bustle. French flirtation is also full of teasing, so someone looking to date a French person shouldn't take themselves too seriously.

This one is actually sort of cute: The recipient is sweet and delicious like chocolate, and the speaker doesn't want anything bad to happen to them. The Spanish are extremely romantic, says Babbel's Cristina, so they'll spoil the objects of their affections with lines like this.

Italy: "Tuo padre è un ladro? no? ha rubato due stelle e le ha messe al posto dei tuoi occhi?" (“Is your father a thief? No, why? I think he stole two stars and put them instead of your eyes.”

Babbel's resident Italian Alessandra says people from her country are known to wax poetic. This line is from 30-40 years ago, but it still catches people's attention, she says. "Italians are very romantic and old-fashioned when it comes to courtship."

Germans may be shy, but they're also very practical, says Babbel's Achim. This approach may be indirect, but it also yields an answer, and they won't waste time making plans if the response is positive. If it leads to a date, show up on time, Achim warns: "'Fashionably late' is just late to us!"

Russians can also be timid, says Lars from Babbel, so they anticipate rejection by saying "Are you chasing me? No." But their tentativeness doesn't last long, because they've got a rebuttal at hand ("What a pity").

Brazil: "Eu gostei de você. Se você também gostou de mim, dê um sorriso. Se não, dê um duplo mortal para trás" (“I like you a lot. If you like me too, smile... if you don't please do a double backflip.”)

This one was very appropriate for this year's Olympics. The Brazilian are highly expressive, explains Babbel's Pedro, in both their words and their gestures. Though doing a backflip is pretty extreme even for them, they will do some silly things to get someone's attention (like saying "please do a double backflip").