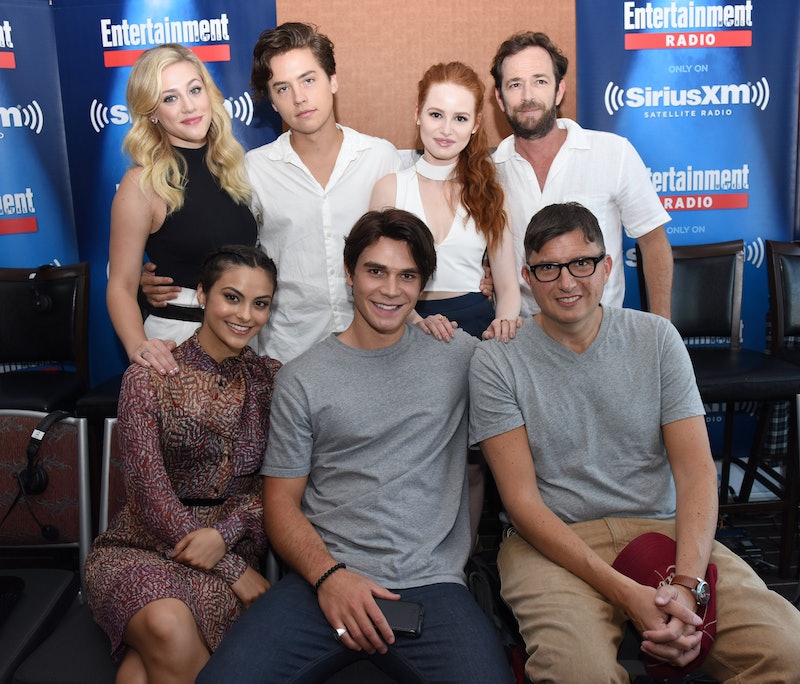 Once in while, you hear of a show that sounds so bizarrely twisted that you can only hope it turns out as brilliant as its initial innovative concept. This year that show is Riverdale, an upcoming CW series with a fever-dream concept I couldn't be more excited for. Set in the world of Archie Comics, the series is hardly the light fare you might expect from the sock hops and milkshake world Archie and his friends live in. This version of Riverdale has a dark underbelly, and though there will be plenty of love triangles (Archie will still have to pick between sweet, blonde Betty and the edgier brunette Veronica) the series isn't exactly saccharine. According to the cast's interview with TVLine, this series can be considered a combination of two TV series that, though very different, are iconic in their own right. Riverdale will be Gossip Girl plus Twin Peaks , and the reason why will make you want to set your DVR stat.

TVLine's sit down with the cast and creator of Riverdale finally gave us some juicy information on what to expect from the soapy new series, and how it has the DNA of both the Manhattan-set CW drama and ABC's trippy '90s mystery drama. Need specifics? Here are the ways Riverdale will remind you of these two beloved shows:

1. It Will Have Its Own Serena Van Der Woodsen

Camila Mendes plays Veronica, a new girl who arrives in Riverdale in order to put a scandal behind her. Sound familiar? It should — Gossip Girl's Serena returns to New York City following a teacher/student relationship at boarding school, and winds up having to face a few other scandals she left in Manhattan as well.

2. It Features A Love Triangle A La Blair, Serena, & Nate

Betty and Veronica are both interested in Archie, but which pair will be endgame? If it's anything like Gossip Girl, the answer is Betty and Veronica, who will find different love interests and remain BFFs.

3. There's A Death Looming Over The Town

Laura Palmer, the iconic Twin Peaks character found in a body bag in the first episode, was the town's Homecoming Queen and all-around good girl — until Agent Cooper discovered buckets of secrets about what Laura was doing behind closed doors. On Riverdale, there's a similar mystery unfolding: Jason Blossom, the town's "golden boy," has drowned under mysterious circumstances. Was it murder, and was his twin sister Cheryl involved? Like Twin Peaks, Riverdale will explore what really happened to the show's victim.

4. It Plays With The Surrealism Of A Small Town

Like Twin Peaks, the town of Riverdale has its own secrets and dark underbelly hidden beneath its friendly small town facade. Though the cast of Riverdale hints that there will still be plenty of simple drama — who will Archie take to the dance?!? — the town and the people within it aren't quite as innocent as they appear.

5. A Teenage Girl Will Be The Villain

Gossip Girl had Georgina Sparks, and now Riverdale will have Cheryl Blossom, the sister of the town's deceased golden boy. Like Georgina, who was involved in the overdose death of her friend before the events of Gossip Girl, Cheryl was there when her brother drowned, and may know more about the tragedy than she initially let on.

6. It Will Be Set In Modern Times

Like Gossip Girl, which began in 2007 and showed how texting changed teen world, Riverdale is moving up its time period from Archie Comics and making the show a modern take on the classic characters.

Who... (drumroll, please) starred in both Twin Peaks and Gossip Girl. Amick played waitress Shelly on Twin Peaks, and guest starred as Duchess Catherine Beaton in Season 2 of Gossip Girl. Look for her on Riverdale as Alice Cooper.

The Upper East Side and Twin Peaks certainly had their own drama, but the town of Riverdale might give these TV places a run for their money.