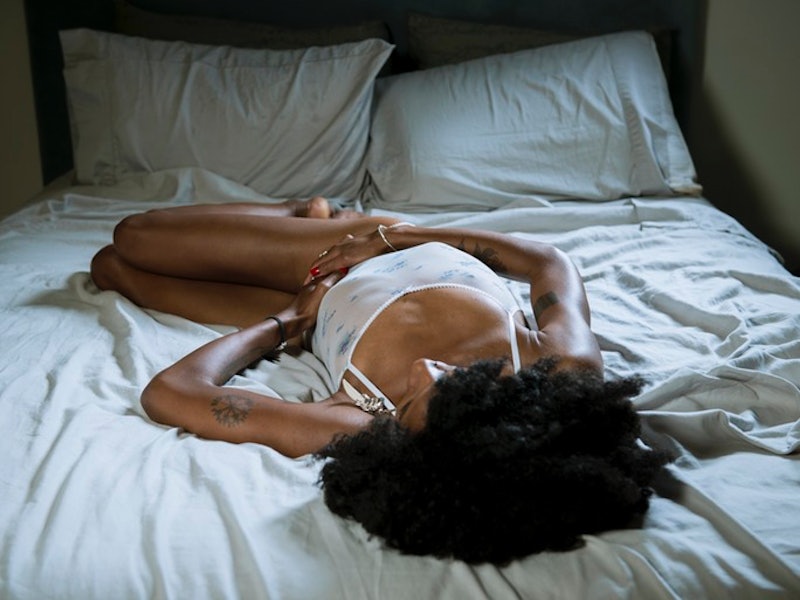 Between dealing with sketchy messages on dating apps and IRL awkwardness, finding a lover is nerve-wracking and confusing work for anyone. But when you add sexual disability into the mix, things can get that much more challenging. As someone with a painful sex condition, I can confirm that dating with vaginismus can be pretty scary.

Since I couldn't experience penetration (something I've known since age 12, after a failed attempt at inserting a tampon), I was afraid that dating any person with a penis might lead to being rejected or hurt. This fear was only further exacerbated by one boy who I had been sleeping with towards the beginning of college, who sexually assaulted me after I rejected his insistence on vaginal penetration.

In addition to the fear that I carried around from this trauma, I also had to deal with a slew of basic sexual expectations that dominate the media and the framework of most sexual interactions. The idea that sex must be between a cisgender man and woman, and involve a penis penetrating the vagina, created shame for me around my sex life, since anything non-penetrative wasn't considered "real sex." Despite my vast sexual experience, my friends would often tease me for being a "virgin," something they were surprised to discover since I talk about sex so much. Lovers would infantilize me, assuming I have no sexual experience if I haven't been penetrated by a penis. Despite this discouragement, I tried the best that I could to develop a positive relationship with sex anyway, since I was (and still am) such a highly sexual and kinky person.

One of my friends with vaginismus, LA-based associate producer Hope Nash, feels similarly disempowered by her condition. "My vaginismus has impacted my relationship so much," she tells me in an email. "It’s kind of turned me into a non-sexual being. I don’t think of myself as somebody who is capable of having sex. I don’t feel sexy very often. I turn my boyfriend down for sex 9/10 times. I try to justify it to myself like 'We can’t all have everything and this is one of the things I don’t have.' It sucks."

The stigma against female painful sex disorders certainly does suck. Heteronormative societal expectations surrounding sex definitely don't help to encourage sexuality or confidence in those who suffer from conditions like vaginismus.

Like many of us who have the disorder, Nash has even had to deal with people expressing pity for her "ever-patient" partner.

"Sometimes when I talk to my mom about it, she makes comments like 'Poor (insert boyfriend’s name here),'" she says. "Like as if he’s the one that deserves the pity, because I can’t give him proper sex."

With remarks like this being ever-present in a person with vaginismus's life, there's always a considerable amount of pressure surrounding sex. Writer, filmmaker and creator of the upcoming Tightly Wound film Shelby Hadden identifies pressure as one of the most difficult parts of dating with vaginismus.

"With online dating, there’s a pretty immediate sexual expectation," she tells me in a Facebook message. "And as soon as a guy finds out they’re not getting it from me, they can jump on their phones and find someone who will. There’s really no reason for someone to be patient with me when they’ve got access to all the single people around them at their fingertips."

As someone who's lived through that, I can vouch for the fact that this pressure to perform is ominous and real. Once I started seeing my current partner, I constantly worried that they would leave me out of sexual frustration or boredom based on my inability to give them "real sex."

Oftentimes, if you can't or haven't experienced vaginal penetration, you're classified as a "virgin," a label that sometimes can feel more burdensome than "vaginismus."

"There’s a lot of shame in being a 'virgin' and not being sexually active when you’ve reached your 20s," Hadden writes. "I was at a party about a year ago when someone went on and on about how long it had been since she had sex. [She said] she had forgotten how to do it (she was referring to a one month period). She called my friend pathetic for not having sex for two years. I ran out on the balcony of my friend’s apartment and just started crying."

And it's because of these narrow perceptions of sex and virgin-shaming that many who deal with the condition don't feel as though talking about it is an option.

"This condition is super emotional – sex, love, intimacy, fear, pain, rejection – they’re all tied into it," Hadden tells me. "There’s a lot of shame, silence, and embarrassment – I’ve often felt very infantilized. It’s so frustrating when your body doesn’t do what you want it to do, especially if you’re constantly trying to change it (I’ve been going to physical therapy once a week consistently for a year and a half)."

With all this negativity bombarding us about our bodies and sex lives 24/7, it's important for vaginismus sufferers (and everyone else) to remember that sex is not just one thing, despite our society's messages that seem to contradict that fact. I've written plenty about how amazing and adventurous my sex life without penetration is, in the hopes to show those who suffer with the condition (and for those who are dating someone with the condition) that stereotypical ideas of sex are not productive for anyone.

Another friend of mine who formerly had vaginismus, sex educator Julia Emerald, agrees with this. "Most people define sex as penetration, so that mentality is a problem," she tells me in an email. "There is no need to have intercourse to experience love, bonding, orgasms, hotness and romantic bonding."

As someone who still hasn't experienced penile penetration, I've had my fair share of mind-blowing sexual experiences with my loving partner anyway, using toys, pegging, bondage and lots of oral sex. Emerald, who can now experience penetration, told me about one of her own exciting experiences that didn't include PIV sex to exemplify that penetration is not a necessity for sexual enjoyment or empowerment. "One of my hottest sexual experiences did not involve penile penetration," she writes. "I was fingered, but it could have easily happened without that and been just as hot. Scenario? Stranger at a Halloween party, me dancing topless with him on the floor, feeling it and running into a dark room later and getting it on. There were two other couples on separate couches in the room when we went in and they heard everything. HOT...And no penetration."

In an ideal situation, when you and your lover are open to the endless possibilities besides penetration and are understanding of one another's limitations, dating can be fun and more compassionate. Emerald finds that her experience with vaginismus has made her more open-minded and understanding when facing her own partners' sexual disorders or dysfunctions.

"Having temporary erectile dysfunction is very common when you have a new sexual partner and they like you or are on the more sensitive side emotionally," she wrote to me. "I tell my dudes not to worry about my expectations and that it's OK. For 5 years, I couldn't have normal sex at all. It's OK your body isn't up to it today. We [can] have sex another way!"

Though I've been through many of the challenges Hadden and Nash described, I've learned to feel sexually empowered — not in spite of my condition but because of it. Thanks to my loving and supportive partner, I've learned to use my vaginismus as a vehicle for greater open-mindedness (leading to sexy and creative things going on in the bedroom) and as a lesson in being compassionate towards the differing abilities of others. Because whether we're men, women, trans or anyone in between, it's unfair to apply one specific blueprinted expectation to every body and sexual experience we encounter.

More like this
The Best Time To Date After A Breakup, According To Experts
By Bustle Editors
7 Women Share Their Best Orgasm Stories
By Lexi Inks
How To Use Astrology In Dating, According To The AstroTwins
By Brittany Beringer
Are Virgo & Capricorn Compatible In A Relationship?
By Kristine Fellizar
Get Even More From Bustle — Sign Up For The Newsletter