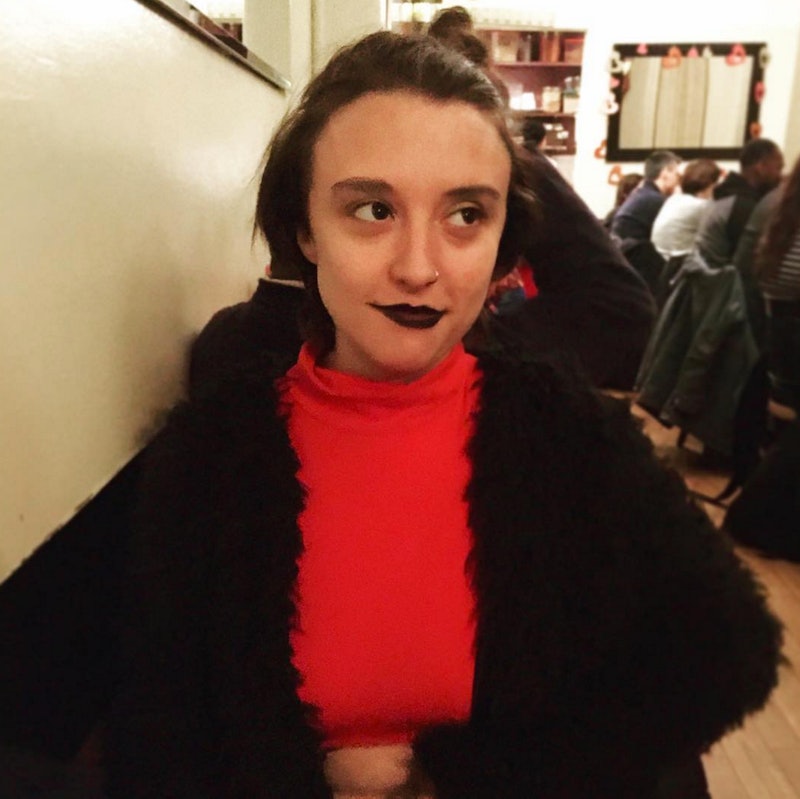 I’m 21, in a long-term relationship with my partner AMAB (assigned male at birth), and I’ve never had vaginal sex. This is because I have vaginismus, a condition that causes my vaginal muscles to painfully tense up whenever penetration is attempted. I first became aware of my vaginal limitations when I attempted to use a tampon in middle school, and began to take it more seriously when any attempt at sexual penetration was met with the feeling of a literal wall blocking off my vagina. I'm not entirely sure of the cause, but my lifelong anxiety disorder as well as the multiple sexual assaults I experienced in my late teens definitely point to a few possible causes, or at least contributing factors that have made the condition worsen over the years. Between skeptical friends and ignorant doctors, I haven't been met with much understanding about my condition. But thanks to the support of my loving partner and Internet friends who also suffer with vaginismus, I've learned to navigate life with the condition and discover possible solutions — while also learning to reshape my own definition of sex.

Lately, I had been going through a tougher time in my treatment. I purchased a dilator kit a few months back to help gradually stretch my vagina, which was going smoothly at first. However, using the very hard and plastic dilators became painful, so I stopped. Feeling slightly guilty about ceasing treatment, and feeling discouraged by the prices of the more comfortable silicone dilator kits, I turned to the corners of the internet where vaginismus forums congregate to seek some comfort. However, I was unhappily surprised when I saw most of the forums and blogs were chock ful lof women (who reported having had oral and other kinds of sex in their lives) lamenting over how awful life is without sex, or how depressing it is to be a 30-year-old “virgin.” This turned my chronic worry into utter confusion. Never had sex? But they had just been discussing oral sex and clitoral orgasms. Immediately, the reality set in that society’s super strict and heteronormative idea of what sex looks like was plaguing these women, making them feel virginal, infantilized, and altogether without satisfaction. Their fallacious thought process was obvious, but it still felt familiar.

My vaginismus is annoying and has caused me embarrassment and frustration in the past, but I don’t let it prevent me from having an amazing sex life. Unfortunately, what I’ve seen in society and even in conversations with vaginismus sufferers, it’s commonly believed that you can’t have sex if you can’t be penetrated.

Perhaps the hardest part of having vaginismus is the stigma associated with it. "No vaginal or penetrative sex" seems to automatically mean "no sex at all" to some people, and so thousands of women are going about their lives feeling ashamed of their virginity (not that virginity is anything to be ashamed of). I know I definitely felt that way at one point, thanks to the rude and insensitive feedback from friends, lovers, and doctors. But I’ve got news for you: you are not automatically sexually inexperienced if you have vaginismus. Ladies (and people of all kinds): if you’ve had a hot and heavy makeout sesh, given/received oral sex, or have been stimulated to the point of orgasm, then you’ve had sex! Sex looks like so many different things, even way beyond my very short list, and vaginal penetration isn’t the end all be all of sexual experience. The majority of cisgender women orgasm from clitoral stimulation anyway.

But the fact is that there is just so much focus on penetrative sex, especially between hetero or hetero-seeming couples. For people like myself and my friend Georgia Haire (who also has vaginismus), people who can’t experience vaginal sex often have their sexuality downplayed or completely invalidated.

“There are so many different ways of having sex to explore that are really exciting and satisfying, so it's frustrating when there is so much focus on penetrative sex,” she told me in an email, “and then feeling so affected by that focus that you end up feeling really bad about not achieving it. I think if there wasn't that kind of obsession about penetration, then I would have felt more OK about talking about my issues and, like you, wouldn't have felt excluded and crap when conversations about 'normal' sex came up.”

Penalizing people for their disabilities, and labeling them as “frigid” (as vaginismus sufferers are often called) instead of showing respect and compassion for their condition (caused by anything from physical factors to anxiety disorders and posttraumatic stress) is messed up. Just because I can’t fulfill your limited idea of what sex is, that doesn’t mean I’m less sexual nor do I owe you anything. But that didn’t always feel so clear to me.

In the past, I’ve had partners that put me down and even assaulted me as a result of my inability to have vaginal sex. And at the time, I felt I deserved the mistreatment. I didn’t know why my body wasn’t working to meet the standards of these straight men I was sleeping with.

Oftentimes, and in my own experience, gynos will attribute the tightness from vaginismus to sexual inexperience and nerves. In a Mic article from December about the condition, 29-year-old vaginismus sufferer Marla described her own experience after talking to her doctor about it for the first time.

"She was no help at all. I told her that sex was very painful and I didn't think I would be able to have a pap smear. She told me that sex was supposed to feel nice, and that I should try to relax. That was it. That was all there was to it. That really put me off," she told Mic.

My vagina tenses up because I have vaginismus, not because I don't want to have sex. After all, I have the highest sex drive compared to most people I know. But at the time, I didn’t understand how I could be my oral-sex-loving and spanking-enthusiast self, while also being the virginal and naive person the boys I slept with saw. However, my current partner (a sex posi queer and super sensitive cutie) helped me let go of the latter idea, a self that was constructed by heteronormative society that was just simply untrue. Based on their lack of questioning and subtle implications, I never felt pressured into having penetrative sex with them. “I never prioritized vaginal sex,” my partner Skylar tells me. “In fact, I don’t generally prioritize sex in a relationship. Which is not to say that I don’t love it — I do. But the most important thing to me in a relationship is getting to know the person I’m with.”

Personally, I've always prioritized sex, but I never saw myself as a super sexual person, because of the lack of penetration in my life. However, I quickly discovered that my love for sex and my inability to have vaginal sex could coexist pretty peaceably. With my open-minded partner’s encouragement, I dove into exploring all kinds of sex, toys, kinks, and terms to our relationship (which is currently open). Not being able to experience penetration definitely leads us to seek more creative ways of having sex, ones that are always fun and involve many trips to Babeland. In place of penetration, we opt for bondage, mutual masturbation, and tons of oral sex.

“I think a lot of people get the idea that because we don’t have penetrative sex there’s not much for us to do in bed,” Skylar tells me. “But to me, it felt like the complete opposite, because we were forced to think of other ways to pleasure each other that was not the vanilla P-in-the-V routine. Now, I was doing things I had never done in bed before, and never before had I had as much oral sex than I do now — which, to me, is the most pleasurable type of sex.”

Despite our few efforts, and my private treatment with a dilator kit, we haven’t been able to have vaginal sex together. Over time, I do hope to be able to have vaginal sex with my partner if I get to a point where penetration is possible and feels pleasurable. This is mostly out of curiosity, and stemming from my inclination to constantly try new things in the bedroom. But in the meantime, that really hasn’t affected our sex life, the satisfaction we get from each other, or the vast territory we explore as sex partners in the slightest. I agree that our sex life is definitely more exciting and pleasurable than some of my friends’ due to the multitude of orgasms and endless ways that we make love to one another.

Now, I’m not saying that I think vaginal sex is obsolete, or that it’s dumb for people with vaginismus to complain about their ability to have that kind of sex. Because having these limitations can be super difficult, especially with our society putting as much focus on vaginal sex as it does. However, my limitations don't limit my pleasure very much in the bedroom. In fact, I feel like it's a great education tool for people I'm having sex with in learning all the (maybe a little unconventional) ways to pleasure someone without the classic penetration. I’m completely satisfied with my sex life, and I look forward to getting kinky with my partner on the daily. My partner and I both genuinely enjoy our time in the bedroom together, and lovingly move around my disability to accommodate my comfort without giving it a second thought.

I get frustrated sometimes, of course, but my journey with vaginismus is my own and tied to intensely personal and traumatic experiences that I’m working through in therapy. I feel grateful that my partner is sympathetic to that, and understands that vaginal sex is not to be prioritized over my mental health or healing process. I look forward to the day I can be penetrated, allowing to add yet another thing to our exciting and ever-changing sexual repertoire. For now, I'll just continue to have mind-blowing sex with my loving partner.