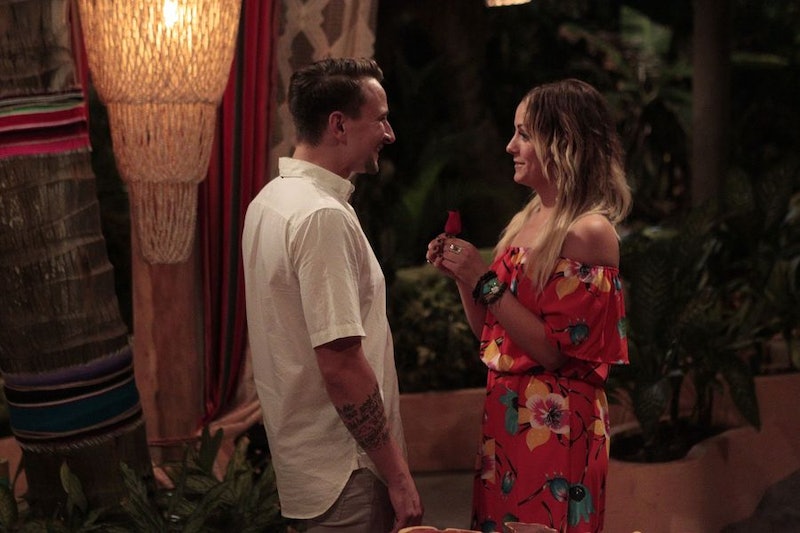 After the way their relationship began earlier this season on Bachelor in Paradise , I never saw Evan and Carly lasting... or even actually dating for real. But I've officially been proven wrong, because on Monday night's episode, they ended up admitting they're falling in love with each other, and shockingly enough, the feeling is mutual. So now, it's time to consider something that once seemed totally impossible: These two actually leaving the show together. After seeing them express their feelings for each other, will Evan propose to Carly on Bachelor in Paradise ? It wouldn't surprise me in the least.

From the beginning, Evan has been 100 percent into Carly — even to the point of (somewhat creepily) using an illness to get her attention. But, eventually, he wore her down, and she started to see past the weird and find that she actually could like this person, and, since then, they've been on their way to becoming one of the most stable couples on the show. When the finale comes around next week and it's time for this cast to start doling out engagements, I have a strong feeling that Carly will be leaving Paradise with a shiny new ring on her finger.

I don't know how I feel about them yet, but these two are for real. Maybe the combo is so weird it actually works? After that world record-setting spicy kiss (and all the spit that followed), I never saw a legit relationship between these two coming, but now that it's happened, I don't know.

Maybe they're living happily ever after right now and they're just laughing (or crying) as they watch these episodes back. Not too much longer 'til we get to find out!