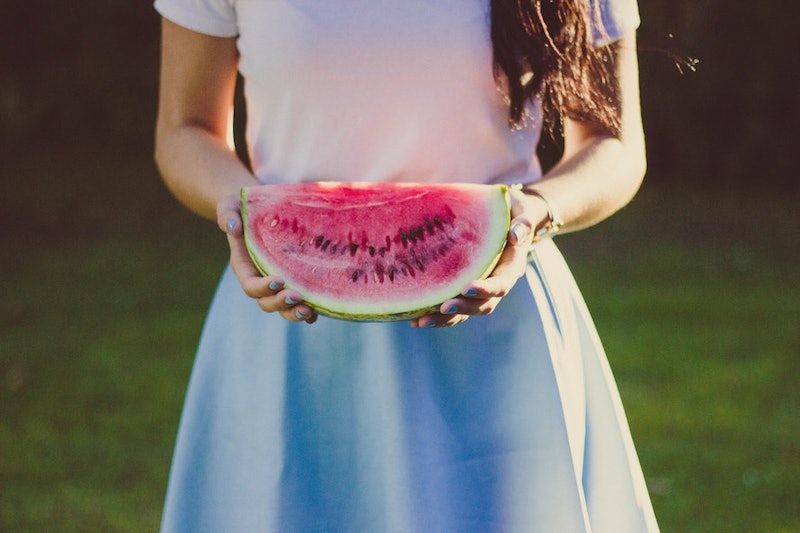 When thinking about foods and drinks that cause bloating, the mind usually jumps to the likes of soda, beer, ice cream, and pizza. You know, all things fizzy and all things dairy. But there are also some lesser known foods that cause bloating — even some that seem positively mild. These are the snacks that sneak under your bloat-detecting radar, and leave you feeling all sorts of bad.

A case of gaseousness, or a bout of bloating, not only makes your jeans feel tight, but it can also be downright painful. When things balloon up to these epic proportions, it's possible to chalk it up to eating a few too many foods that are difficult to digest, or maybe some that are known to lead to water retention. But occasionally, painful bloating is due to a slight food sensitivity.

If you think that might be the case, it may be worth getting yourself checked out. "There are food sensitively tests that you can take with a doctor or nutritionist," says Sarrah Hallock, Holistic Nutritionist and Health Coach from GoodLooks, in an email to Bustle. "Or if you want to be your own food detective, try eliminating these foods for six weeks ... and then reintroduce them one at a time to see if they cause symptoms." Read on for some of the foods you might try eliminating.

If movie theater popcorn and big bowls of chips make you feel super puffy, it could be excessive saltiness that's to blame. "Eating high-sodium foods can trigger water retention, which can balloon you up," Cynthia Sass, MPH, RD, told Charlene K. Petitjean on Health. "When and if you do succumb to salt, drink a lot of water to help flush it out."

The next time you pop some gum, or eat a hard candy, take note of your ensuing levels of bloaty-ness. "When you chew or suck on these, you end up swallowing more often, which means you're probably swallowing more air," said Jenny Sugar on PopSugar.com. "Also, ones that contain artificial sweeteners can also lead to GI issues." Steering clear of the likes of Sorbitol and Fructose can help.

If you wake up feeling pretty OK, but have a bloating issue a few hours later, it may be time to blame it on your breakfast. "Although you may not have a full blown allergy to a particular food, you may have a food sensitivity," Hallock says. And one of these culprits — aside from dairy, gluten, etc. — is eggs.

If you ever feel bloated after eating something seemingly benign (like a cucumber) it could be due to its pesky seeds. "While research on this has been varied, people with stomach issues have previously been told to avoid foods with seeds, with the thinking being that these food particles could block or irritate the diverticula, or small pouches that form in the colon wall," said wellness expert Lauren Imparato on MindBodyGreen.com.

I know, I know... apples are supposed to be the best food, keep the doctor away, and all that. But, while that may have some truth, they're also really good at causing gas. "High in fiber, apples also contain fructose and sorbitol, sugars found in fruits that many people can't tolerate," Sass said. So keep your apple consumption to a minimum.

As far as foods go, peanuts are pretty notorious for causing the most horrific allergic reactions. But they can also — less severely — lead to bloating, according to Hallock. "If you find a food triggering those symptoms, eliminate it from your diet for six months and see how you feel," she says. (Sorry, peanuts.)

I don't know about you, but a veggie burger ain't a veggie burger without tons of onions on top. But, as delicious as they may be, a few too many can lead to bloating. "Foods like leeks, shallots, and onions are poorly absorbed and cause increased water content in the intestine," Lin Chang, MD, told Penelope Rose Morrison in Prevention. Sad news, indeed.

This isn't an excuse to skip out on healthy foods for the rest of forever, but do know what you may be getting yourself into after downing some salad."Raw foods are jam-packed with nutrients ... but they are also incredibly hard for your digestive system to break down," Imparato said. "Raw foods often travel through your intestines only half processed, especially if you ate while rushed or stressed, aggravating your intestines further."

Even though it's the most innocent sounding food of all (I mean, it has water in the name), watermelon still does a pretty good job of causing problems in the gut. This is due to its high levels of fructose, according to Morrison. Eat a few slices, and you may be in for all sorts of bloating and gas.

Kale is another one of those perfect foods we should all be eating all the time. But it's also part of the family of gas-causing veggies. "Kale, broccoli, and cabbage are cruciferous vegetables, which contain raffinose — a sugar that remains undigested until bacteria in your gut ferment it, which produces gas and, in turn, makes you bloat," Petitjean said.

If your stomach ever feels particularly painful after eating some sushi or tofu, it could be that soy wreaking havoc in your gut. "Many people also have a slight soy allergy without realizing it," Imparato said. "Notice if you bloat after eating tofu, soy milk, or other soy products and then remove them from your diet."

That's one way to feel better. The only other way, however, is to tune into your bowels. "It’s about listening to your body and noting how certain foods make you feel," Hallock says. "At the end of the day, one person’s food is another person’s poison."

More like this
Starbucks Released New Menu Items For The Summer
By Emma Garza
A Beginner's Guide To Drinking Whiskey
By Alexis Morillo
How To Make The Watermelon, Feta, & Mint Salad Trending On TikTok
By Emma Garza
6 Abortion Advocates To Follow On TikTok
By Sara Youngblood Gregory
Get Even More From Bustle — Sign Up For The Newsletter