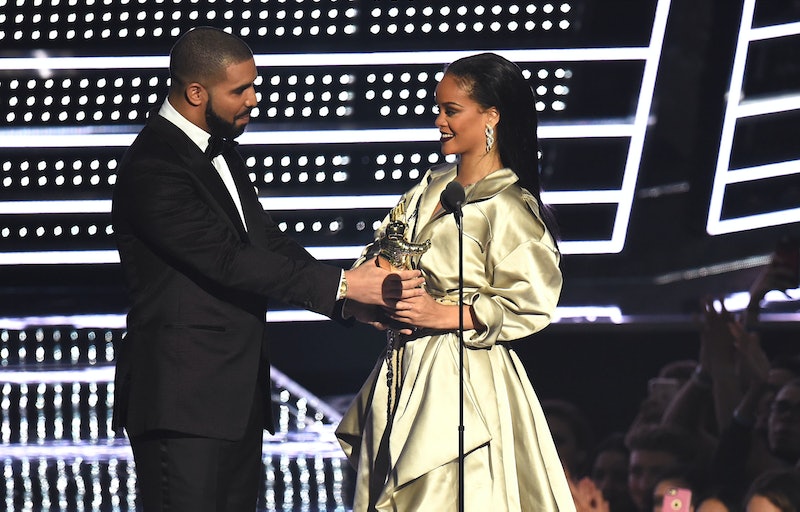 If you've been rooting as hard as I have for Drake and Rihanna to someday become a real couple, I have some good news for you: Now, more than ever, it seems like that could totally be a possibility. After presenting Rihanna with the 2016 Video Vanguard Award at the VMAs on Sunday night, they've been pretty much inseparable... and it even sounds like they just went on a date. Like, a real date. On Monday night, Rihanna and Drake were spotted together in New York, and according to what witnesses report to People, they've been getting very cozy since after the VMAs.

Rihanna and Drake were seen leaving Nobu after having dinner together, and that's basically the whole story. But that's something, right? And isn't this the way it always goes when celebrity couples are finally found out? They're spotted together and then all of a sudden, cute couple-y photos start hitting Instagram and before you know it, somebody's confirming that the relationship does exist. Of course, there's a chance this was just a friend thing, since they are obviously close and being that they're in the same city, of course they're hanging out. But they could be dating. There's always that chance. I want to believe!

And then, there's what those witnesses told People about what they saw at the after party that took place post-VMAs, and that practically selas it. Here's the source's description of the events. I'm telling you, this is serious evidence:

"[Drake] was literally shadowing her every movement and was just so affectionate and adoring the entire night . . . They were very secluded the whole night. The club usually clears out around 4 a.m. but they were late getting there so they stayed around after it closed and shut it down. And they left together. He was really adoring and cute."

Adoring. Cute. Affectionate. Sounds like boyfriend behavior to me! And mere hours after Drake confessed he's been in love with Rihanna for years in front of the entire American viewing public, Beyoncé, and everyone else. These two have to be dating. They just do!

Nothing's official until either Drake or Rihanna (or their reps) say it is, but I think now more than ever, those of us who are rooting for them to live happily ever after have reason to believe it could happen. And maybe it's even been happening all along, and they're just super stealthy at making sure they keep their fans guessing.

Here's hoping we don't have to wait until Drake eventually receives the Vanguard Award to find out the truth. Please fill us in!