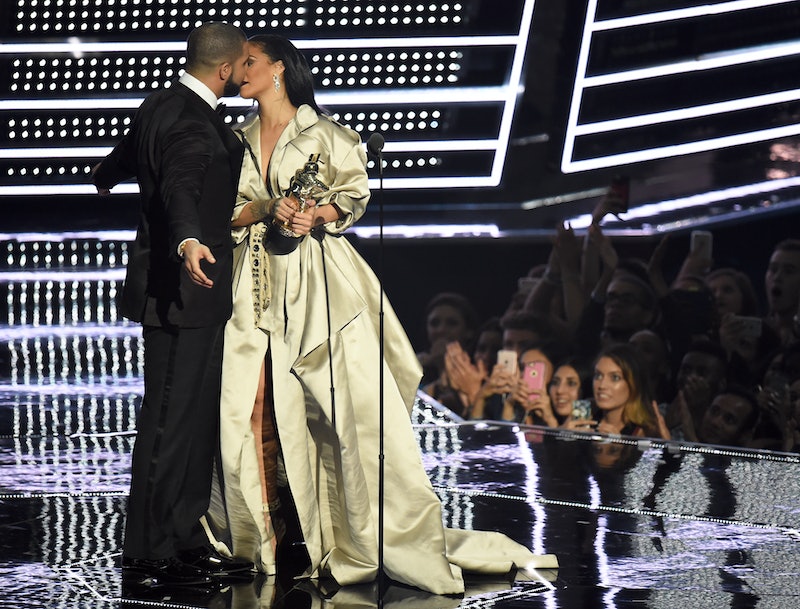 What even just happened? While presenting her with the iconic Video Vanguard Award, Drake just confessed his love for Rihanna at the 2016 VMAs. In fact, he said that he's been "in love" with her since he was 22 years old. Guys, I am literally screaming. And, so was the audience.

While Drake and RiRi have always had an "are they or aren't they" type of relationship — one that was definitely romantic according to him, and one that was more based in friendship, according to her — the rapper has pretty much always made his feelings about Rihanna well known (the man congratulated her on the award via a billboard, for God sakes). But never — I repeat, NEVER — as explicitly as he just did on Sunday night, literally revealing in his speech that he is in love with her and has been for years. It's no wonder that the audience immediately erupted into shrill shrieks upon his confession: This is one of those moments that will go down in VMAs history, alongside the Britney Spears/Madonna kiss and the Kanye West/Taylor Swift mic grab.

"She's someone I've been in love with since I was 22 years old," Drake admitted during the speech, to which Rihanna (oh, Rihanna) took a little bit of a deep breath and rolled her eyes good-naturedly at her friend.

While the confession prompted an entire wealth of reactions — everything from pure joy to secondhand embarrassment to #goals to people who genuinely thought the man was going to pop the question — it was really only Rihanna's response that mattered. And while you can see her immediate reaction in the video above, you can also check out the moment that she ~friend-zoned~ him on live TV, when Drizzy seemingly went in for the kiss and she gave him her cheek instead:

Still, apart from Queen Beyonce's killer performance (as well as Rihanna's, for that matter), Drake's romantic confession certainly tops the 2016 VMAs — and has won pretty much everyone's hearts. Everyone, that is, except for maybe the one who matters most.

More like this
Taylor Lautner Thought Taylor Swift's 2009 VMAs Interruption Was A "Skit"
By Alyssa Lapid
Everything To Know About Rihanna’s Staggering Net Worth
By Hugh McIntyre
Rihanna’s Collaborators, Ranked By How Likely They Are To Perform At The Super Bowl
By Jake Viswanath
9 Photos Of Celebrity Couples & Unexpected Duos At The 2023 Grammys
By Jake Viswanath
Get Even More From Bustle — Sign Up For The Newsletter
From hair trends to relationship advice, our daily newsletter has everything you need to sound like a person who’s on TikTok, even if you aren’t.