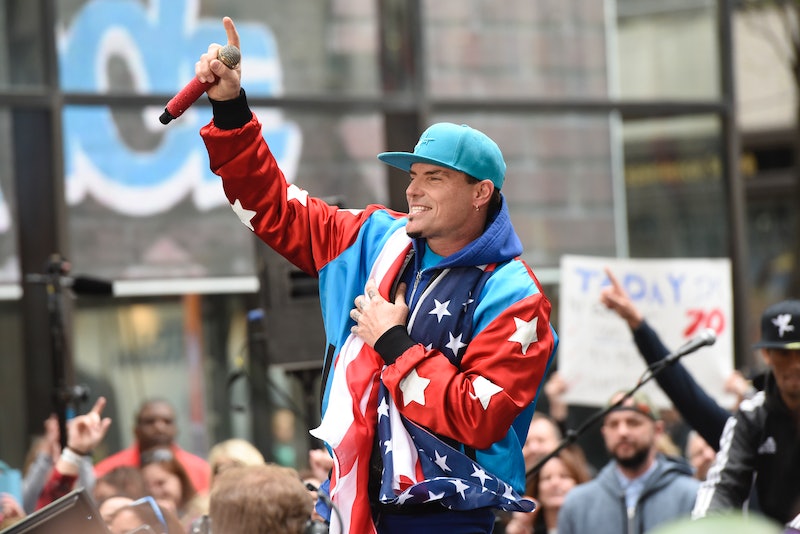 Dancing With The Stars Season 23 has the world all kinds of excited, especially since we now know who's going to be taking part. From Amber Rose to Rick Perry, the new season promises to be equal parts exciting and controversial. But perhaps one of the most exciting announcement of all is that '90s legend Vanilla Ice will be on Dancing With The Stars. The rapper is obviously a household name who needs no introduction from me, but what has Vanilla Ice been up to prior to the announcement that he'll be performing weekly on everyone's favorite dance show? The star has actually been incredibly busy.

One of the most impressive things on Vanilla Ice's resume is the fact that the rapper has diversified and been taking on more and more film roles. Notably, he has collaborated with Adam Sandler more than once, showing that he has a real penchant for comedy. In 2012's That's My Boy, Vanilla Ice starred opposite Sandler and Andy Samberg, proving how comfortable he is on the big screen, particularly when it comes to fast talking comedy. Even though the rapper got nominated for a Golden Raspberry for his role, the collaboration led to another part in an Adam Sandler film — Vanilla Ice played Mark Twain in the Netflix movie The Ridiculous 6 , released in 2015.

Aside from his movie roles, Vanilla Ice has continued to perform his classic tracks. In September 2013, he performed at halftime at a Houston Texans game. However, when the team went on to lose the remaining games in the season, some Houston Texans fans turned on Vanilla Ice, blaming his performance for cursing the team. That seems pretty harsh if you ask me. However, in May 2016, the rapper performed at a music festival in Peru alongside bands including Limp Bizkit and The Rasmus, showing that the general public still want to see him perform.

Perhaps the rapper's most successful venture to date outside of his music career is his TV show. Season 6 of The Vanilla Ice Project started in April 2016 on the DIY Network, and the series has apparently been so successful that the performer has started a website dedicated to giving others advice on home improvement. Clearly, he's a man of many talents.

Dancing With The Stars Season 23 is the perfect vehicle to showcase the rapper's dance skills, and will likely be another opportunity for Vanilla Ice to prove to the world that he's way more than a one-hit wonder.