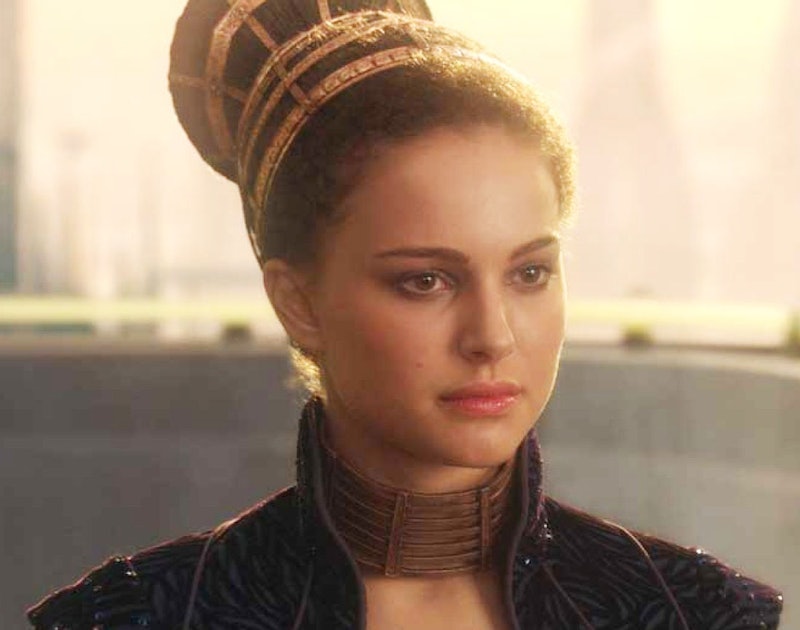 The Force may have been reawakened for Star Wars fans around the world, but that doesn't mean that everyone's willing to go back and re-watch the prequels of the early-2000s. In fact, one young Star Wars fan is not even allowed to watch the three films that cover Anakin Skywalker's backstory — even if his mom is Padmé. In a new interview with Jimmy Kimmel, Natalie Portman revealed that she won't let her son watch the Star Wars prequels. Whether you agree with that parenting decision or not, her choice to shield her child's eyes definitely isn't for the reason even the most casual Star Wars fan would think. The quality of the prequels compared to the other three have nothing to do with it.

Portman's parental viewing block actually comes because of her son's relationship to her and Padmé's ultimate fate in Episode III: Revenge Of The Sith. Honestly, he may have a point here considering the fact that her son, Aleph, is just 5 years old.

It's kind of a shame. You know, when I made it, I was like, "This is going to be the coolest thing. One day when I have kids, I can show them." And boys, of course, are obsessed with it and know all about it before they've seen it. [But] I realized, I die in the movies. I feel like it's kind of a scary thing to show your kid.

While I totally get where she's coming from, I can't help but feel for her son. Who, even at the age of 5, "[hasn't seen] it, but he knows about it." It sounds like Aleph is exactly the fan she thought he would be, and it's unclear if she's going to hold him back from watching any of the Star Wars films she's not in. Luckily, that's most of them, even more so thanks to the recent success of Star Wars: The Force Awakens, and Rogue One: A Star Wars Story on its way.

However, just like Anakin and Padmé's love, her hold on the films can't last forever. As soon as little Aleph is old enough, you better believe he's going to catch up on all of the films like the rest of them. Let's just hope that he's not as critical as some fans are when it comes to Portman's performance. No matter what, he gets to go around and say that he has the same mom as Princess Leia and Luke Skywalker. If that doesn't make him the coolest kid, I don't know what will.