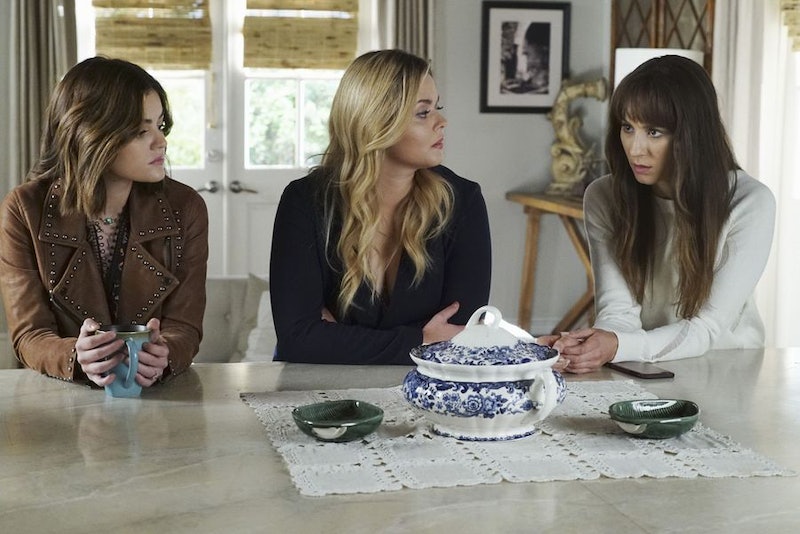 We knew from the episode synopsis that someone would die during the Pretty Little Liars Season 7 finale, yet that didn't make watching it happen firsthand any less difficult to bear. But how much can we really trust everything we saw, given this show's tendency to bring characters back from the dead? That's the thing... we can't, at least not when it comes to the fate of certain characters. For example, like me, I'm sure many of you are wondering is Toby really dead on Pretty Little Liars or could this be another fake-out attempt like it was with Mona a few seasons back? It's always hard to be 100 percent sure, even when the writers and actors themselves swear that it's legit since they could always be lying to help prevent spoilers. (Looking at you, Kit Harington!) But as bad as that car crash looked, I really want to believe that he's not a lost cause just yet.

Unlike Noel who was freaking BEHEADED during the episode, Toby's situation is a little less straightforward than that, thank goodness. (Seriously, if I had had to endure seeing Toby get beheaded I would not be capable of cognitive thinking for several weeks.) So it's important to not give up hope on him at this point in the game. After all, it's not like we haven't seen characters recover from much worse on this show.

The only thing that has me more concerned that I would be otherwise is the bittersweet goodbye kiss he had with Spencer earlier in the episode. Was this done to appease Spoby 'shippers or could this indicate that this was the last time this two characters would ever see each other again. Just typing the words breaks my heart, so I really hope that isn't the case, but I also would be naive to rule it out completely. Here's hoping for a speedy recovery from both parties. Now, if you'll excuse me, I have to go and eat my feelings about all of this. BRB.