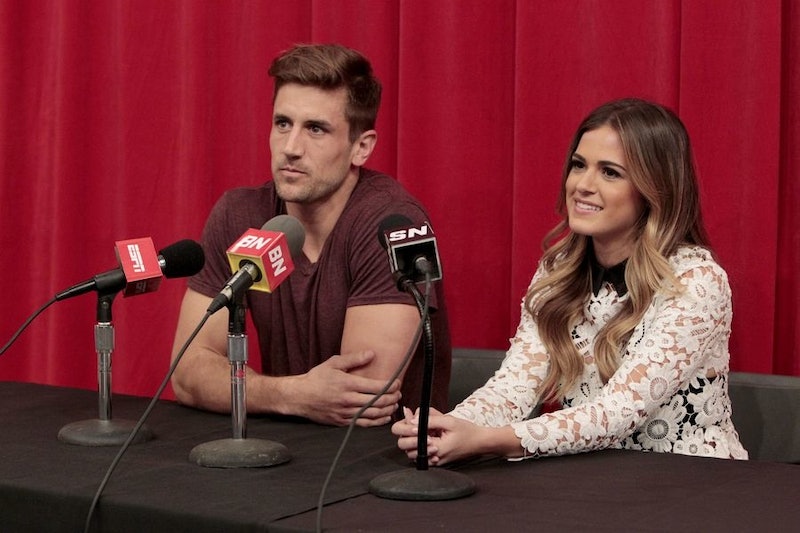 Well, don’t mind me as I add Jordan Rodgers and JoJo Fletcher’s pre-The Bachelorette finale disguises to my Halloween costume idea shortlist! As Entertainment Tonight points out, the winner of The Bachelorette Season 12 recently shared a photo that he and his fiancée snapped while hanging out in public — gasp! — some time before the finale aired (i.e., before they could officially announce their coupledom). In the selfie, Jordan Rodgers and JoJo Fletcher wear big wigs and eye-catching headgear and flashy outerwear; the word “subtle” does not come to mind. “The last time we were in Chico together,” Rodgers writes in the Instagram caption, “you might have met our alter egos Goldie and Ricky...oops #sneaky #sorryABC.”

Whoever wins The Bachelorette Season 13, know this: If you two decide to go on a date out in the real world before the season finale airs, the disguise bar has been raised. You want to wear chin-length wigs and caps? Too bad. Bristowe and Booth already did that. You want to pair frizzy hairpieces with a princess hat and/or a batting helmet? Too bad. Rodgers and Fletcher already did that. Follow Rodgers and Fletcher’s lead and heighten the bit; be brazen. I’m talking wear-matching-skeleton-Morphsuits-to-a-busy-Starbucks-brazen. This may blow your cover, but to quote 2009 cheer comedy Fired Up!, you’ve gotta risk it to get the biscuit. And the “biscuit” in this scenario is “a lovely leitmotif.”

Your move, The Bachelorette Season 13 winners (whoever you are).