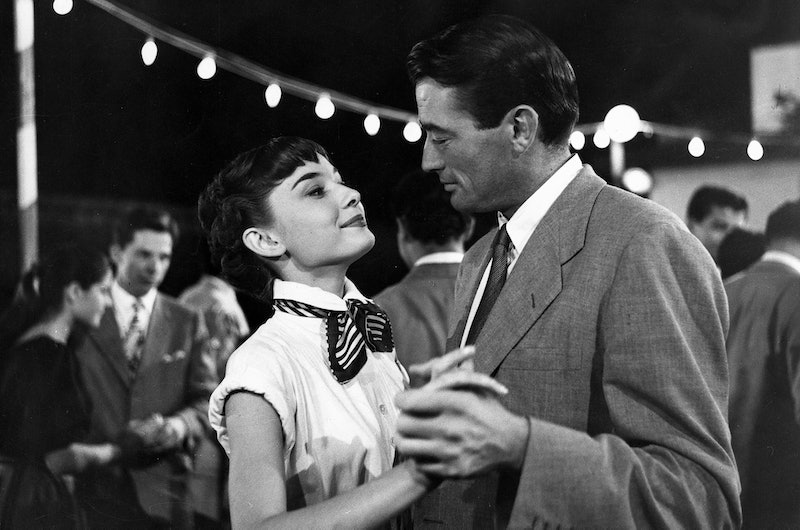 If you have ever been, or have ever been around, a high school girl, chances are that you've been a witness to the grace and poise that is Audrey Hepburn either via a poster, or maybe a diary cover, or a DVD box set. And, whether you have or you haven't, you need to get your Hepburn fix by watching Roman Holiday before it leaves Netflix on Sep. 1. First of all, it's incredibly simple to do, since you don't even have to leave your house. Second of all, the actress' debut film is also one of your best, and, if you haven't seen it yet, then you're really missing out on a classic.

Some chumps see something like Roman Holiday on their queue and are instantly turned off because the film is black and white, which is "boring" to them. I feel you, for I was once, long ago, one of you. However, just because a movie is old doesn't mean it's bad. But Roman Holiday is the definition of a classic, with two equally classic and classy starring leads: Audrey Hepburn and Gregory "Dreamboat" Peck. It's not bad every now and again to revisit old Hollywood. In fact, sometimes it leads the viewer to appreciate new Hollywood more.

Roman Holiday tells the fairytale-esque story of Ann, a European princess who feels stifled by all her responsibilities. She decides to sneak off for the night while on a tour of Rome. Unfortunately — but then later we find out fortunately — the royal doctor has given her a sedative before she sneaks off, which causes her to fall asleep on a park bench. Now we come to the fortunate part, which is when Gregory Peck as American reporter, Joe Bradley, discovers her on the park bench. At first, Bradley sees the princess as a perfect way to get an exclusive interview and story from real European royalty. But soon the two fall in love while he ushers Ann around the city.

This movie is notable for two reasons that should make you really want to see it, and not just to boost your pop culture acumen and movie know-how for bar trivia nights or party small talk. The first reason is that, even though Ann was Hepburn's breakout role, she won an Academy Award for Best Actress. She was a veritable unknown before the film, but her skill was so immense that she won the most prestigious of acting awards. Watching the actress beautifully and gracefully perform her first role is a treat to watch. And, speaking of awards, the film also won two other Oscars for Best Writing, Motion Picture Story, and Best Costume Design, Black and White. Say what you will about awards ceremonies, but all those accolades must mean something.

Second, Roman Holiday is the first American movie to be shot entirely in Italy. Sure, other movies were based in Italy, but they were shot in studios in Los Angeles until Roman Holiday. That's pretty freaking cool. It helps that Rome is super beautiful, so the scenery and tourist spots are definitely something to get excited about. Don't even get me started on the couple riding a scooter through the narrow and busy streets of Rome, because I might start weeping from the beauty of it all.

Don't miss your chance to behold the phenomenal acting and queenly but goofy vibe that is Audrey Hepburn in Roman Holiday. Netflix might be taking Hepburn from us, but we can all make sure the actress goes out with a good ol' fashioned viewing of one her most famous roles.