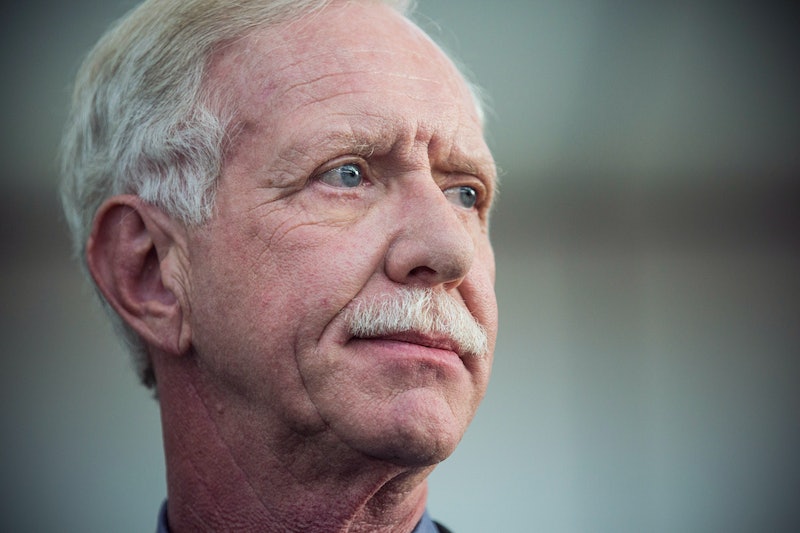 Actor Tom Hanks and director Clint Eastwood have joined forces for the first time in the new film Sully , a powerful look at one of the more unbelievable true stories of the last decade: "The Miracle on the Hudson." On January 15, 2009, Captain Chesley "Sully" Sullenberger was piloting US Airways Flight 1549 out of New York's LaGuardia Airport when the plane ran into a flock of geese on its initial climb, causing both engines to fail. With no other options, Sully led a guided landing in the Hudson River, resulting in no casualties. It's been seven years since that fateful flight, so what's the real Sully doing now?

For one thing, he's not flying planes anymore. He retired as a pilot in March 2010, but has continued to be involved with aviation. Beginning in 2009 and lasting until 2013, he and his Flight 1549 co-pilot Jeffrey Skiles served as the chairmen of the EAA Young Eagles Program, which looks to inspire young people to take an interest in aviation. In 2011, he became a CBS News contributor as their Aviation and Safety Expert, a role which he still holds today. And he's also become a bestselling author, penning two books since he achieved fame: 2009's Highest Duty: My Search for What Really Matters and 2012's Making a Difference: Stories of Vision and Courage from America's Leaders. But most of Sully's time these days is spent as an inspirational speaker.

If you were to fly over to Sully's website (get it?), you'd see a lot of business about hiring the former pilot to come speak at your next function. Sully is represented by the Harry Walker Agency, which bills itself as the world's leading speakers bureau, and he's managed to put together quite an impressive portfolio of speeches. He's delivered over 200 keynote addresses to date, and often speaks for large corporations such as Dupont, Chevron, and AT&T; specializing in topics like leadership, crisis management, and overcoming obstacles.

So even though you'll never have the chance to be flown anywhere by Captain Sully Sullenberger, you can still book him as a speaker at your next corporate get-together if you're looking to be inspired by his story and experience.

More like this
'Elvis,' 'Walk The Line' & 10 Other Movies Where The Actors Actually Sing
By Radhika Menon
Taylor Swift's “Carolina” Theme For 'Where The Crawdads Sing' Soundtrack Is Here
By Jake Viswanath
Olivia Rodrigo’s Song Dedication To 5 SCOTUS Justices Sent A Strong Message
By Grace Wehniainen
Windrush Victims Are Still Waiting For Compensation
By Sam Ramsden
Get Even More From Bustle — Sign Up For The Newsletter