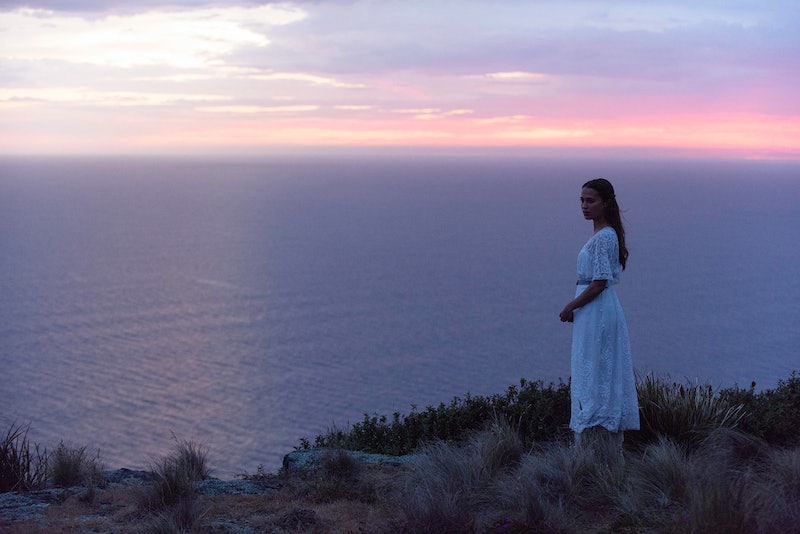 During the New York press conference for The Light Between Oceans, screenwriter/director Derek Cianfrance admitted to crying on the subway while reading the novel that serves as the film's source material, which is as relatable as it is telling. There are plenty of reasons to cry during this film, from the many heartbreaking moments to the breathtaking visuals. However, while watching the new film, out Sept. 2, I was most struck by how (spoiler!) The Light Between Oceans addresses miscarriages and their effects on a young couple. While at the press conference, Cianfrance and star Alicia Vikander told Bustle why they think it was important to show not one, but two scenes of Vikander's character losing a pregnancy, despite the subject not typically being addressed on-screen.

"Because they happen," Cianfrance said. "The thing that attracted me to this story in the first place was, you know, I've been making movies about families. When I was a little kid I remember I always used to think that people lived on islands. Because I always thought that it was strange that when people came into my house, when visitors came over, we changed. Like, our behavior changed. Then we went back to being real again."

"Smiling family photos," Cianfrance added, only tell half the story. He recalled hearing his friends' parents fight while playing in a friends' basement, and realizing, "Wow, everyone lives on an island. Everyone has these family secrets."

Based on a 2012 novel, The Light Between Oceans follows Tom, played by Michael Fassbender, who returns home to Australia after World War I and takes a job as a lighthouse keeper. He soon marries Isabel (Vikander), and their love-filled and isolated life on the island is rocked by the two miscarriages. When a dead man and a newborn baby wash up on their shore, Isabel views it as an answer to her prayers. However, raising the baby as their own ends up complicating the couple's lives even further. The movie's decision to highlight the complexity of starting a family and the struggles, like miscarriage, that can come about resonated with Vikander, she said at the conference.

"I have five siblings," the actor said. "I see myself as having a family one day, but ... it's something that when I get older more and more of my girlfriends and male friends too tell me about ... when you're handling a subject like this, there's so much discussion coming up and people are opening up about their own experiences."

As a society, we don't talk about miscarriages enough. There is shame in just admitting that they exist, despite their frequency; according to AmericanPregnancy.org, 10-25 percent of all clinically recognized pregnancies end in miscarriage. In The Light Between Oceans, Isabel is so to embarrassed by her first miscarriage that she refuses to see a doctor. The movie is set many decades ago, but it's unsettling that not much has changed in the stigma around the subject.

For Cianfrance, it was important to discuss an issue so rarely brought up on-screen. "I made it my mission to show what happens inside these [houses], on these islands," the director said. "And then I found this book that takes place on a literal island, and it's about a relationship on a literal island. I was like 'oh my God, this is what I was born to do.'"

Filming these scenes, as one can imagine, was wrenching for everyone involved. Some of the takes, according to Cianfrance, went on for as long as 40 minutes. "It felt like I was leading up to this marathon," said Vikander. "An emotional one."

Thankfully, Cianfrance said that Vikander and Fassbender — a real-life couple — supported each other throughout the shoot. "Michael and Alicia were so there for each other," he said. "They had each other's back."

It would be so easy to simply focus on the romance when adapting a book like The Light Between Oceans, especially with two actors as good-looking as Vikander and Fassbender. The more pleasant choice would be to gloss over Isabel's multiple miscarriages, or show the first and only imply the second. However, by peeling away the layers and showing what's really going on in a story as lush and romantic as this one, The Light Between Oceans is a far more affecting movie than it otherwise could've been.