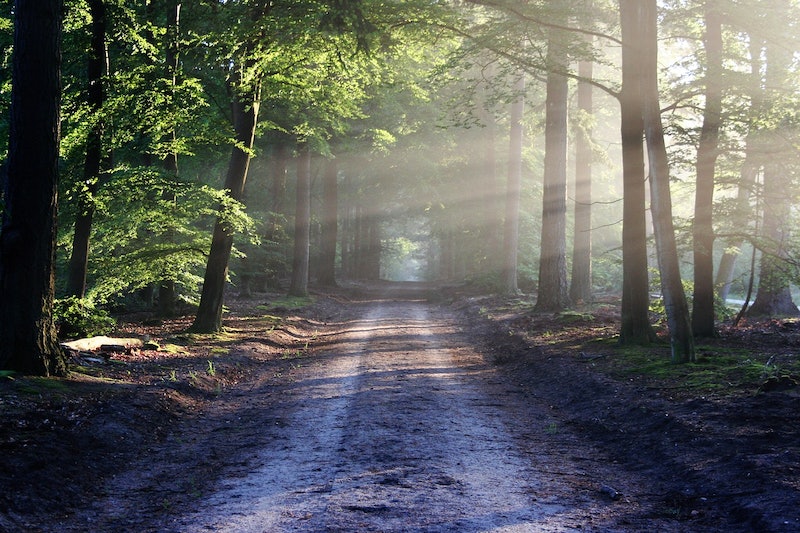 One of my pet peeves is undoubtedly bad drivers. Like... you see that little stick next to your steering wheel? That's a turn signal. Use it. But bad drivers pale in comparison to ghosts, possessed animals, and faceless hitchhikers — and that's exactly what you might run into if you drive down one of the most haunted roads in America. In these cases, people who refuse to signal or follow you too closely just to be jerks are the least of your worries.

While many of these stories can be written off as urban legends, the real life accounts of living, breathing witnesses lend more validity to the haunting tales of apparitions and mysterious noises. You might think only buildings can be haunted — homes, churches, etc. But really, spirits like to hang out just about anywhere. In fact, there's probably one standing next to me right now. (Well, maybe not. But maybe yes? Who knows. It could happen, right?)

If you're planning a road trip and you're feeling a bit daring, buckle up and hit the haunted, possessed, cursed, diabolical, terrifying road. Just make sure you pack a change of panties. And if you aren't in the daring mood, and a road trip tries to take you down one of these roads, you better Google map that ish and find another way.

Archer Avenue is considered by many to be one of the most haunted places in all of Chicago. This stretch of road, specifically between St. James-Sag Church and Resurrection Cemetery (eek), is said to be home to a number of restless spirits. The road winds through lakes, forests, and numerous cemeteries. Tales of phantom horses crossing 95th and Kean are well known, and monks are said to haunt St. James-Sag.

But the scariest ghost story of all is probably that of Resurrection Mary. The legend goes that one night, Mary was out dancing with her boyfriend. They got into a heated argument and she left, determined to walk home despite the cold. Along Archer Avenue, she was struck by a driver, who took off and left her for dead. Her parents found her there, and later buried her in Resurrection Cemetery.

Sightings of Resurrection Mary will keep you up at night. There are numerous accounts of men picking up a female hitchhiker with blond hair and blues eyes, dressed in party attire. She remains very quiet, but as they pass Resurrection Cemetery, she asks to be let out and disappears into the cemetery.

Continuing on in the list of roads I will never drive down ever is Clinton Road in West Milford, New Jersey, which has no shortage of terrifying tales that are making me really uncomfortable right now. Phantom headlights are said to come out of nowhere and follow drivers dangerously closely, then disappear into thin air. The are stories of an abandoned circus zoo that got involved with cross-breeding, resulting in a possessed albino deer. Honestly, regular deer are freaky enough at night. Now we need to avoid a possessed albino deer?

Then there's Ghost Boy Bridge. According to the stories, a little boy drowned there years ago; and if you throw a coin over the bridge, he'll throw it back at you. And because Clinton Road isn't petrifying enough already, there's this: It's said to be a popular spot for Satanic worshippers (although whether this is actually the case hasn't been proven), and you can supposedly find weird Halloween masks randomly thrown about.

In Ohioville, Pennsylvania, there's a one-mile stretch of Kelly Road where outrageously bizarre activity has allegedly been witnessed. Kelly Road is surrounded by dark, thick woods, certainly not helping in making it any less creepy. Reportedly, when animals hit this piece of land, they turn from sweet and passive to evil and aggressive, violently chasing other animals and even people. Freaky. I can't even look my dog in the eye right now... Apparitions have reportedly been spotted, and unexplainable noises have allegedly been heard.

The strange happenings on Kelly Road haven't been definitively explained, but many believe it has something to do with cult activity of the past and possible curses that may have been put on the land.

Venture to Wisconsin and take a leisurely drive down Boy Scout Lane — NOT. The unpaved road winds through a densely wooded area. (The Creepy Factor shot up to a 10 already.) According to the legend, in the late '50s or early '60s, a troop of Boy Scouts went into these woods on a camping trip and never returned. There are several theories surrounding the cause of death. Some say they dropped a lantern and started a forest fire that killed everyone. Others say they got lost and starved to death. (Kind of ironic for Boy Scouts, eh?) A third theory is that a deranged bus driver or Scoutmaster killed them all.

(Of course, there's no evidence that any of this actually occurred; the land was apparently once owned by the Boy Scouts, but a camp was never planned or set up there. And the rest of the stories are pretty much just made up.)

But drivers who travel down Boy Scout Lane have reported hearing footsteps struggling to get through the woods, along with seeing red lights shining through the trees. Is it a sign that the ghosts of the boys are still in there, desperately trying to get out? Who knows.

Ohio is home to Dead Man's Curve, a deadly road sandwiched in between two freeways. The turn is so sharp that it has highest crash rate ever found in an Akron Metropolitan Area Transportation Safety study Naturally, this has given rise to a number of stories, one of which claims a group of teens was involved in a fatal accident in the '60s after being hit at over 100 miles per hour; witnesses claim to see their car (along with the one that hit it) floating in the air. There are also stories of a faceless hitchhiker (dear God), and apparitions of old carriages that sadly fell off Dead Man's Curve more than 100 years ago.

The takeaway? Find a detour.

The story goes something like this: On Aug, 22, 1967, two 10-year-old girls died along Route 2A in Haynesville, Maine (and as The Lineup notes, records do indicate that this actually happened). The legend says that it was merely an innocent walk along the woods that led to their instant death. But at least one of these girls didn't completely "cross over," so to speak. Even today, drivers share stories of a little girl ghost walking down Route 2A, looking lost and confused. People have stopped and offered her a ride, and the little girl will climb in. But shortly after the drive continues, she disappears, right beside the driver in the passenger seat.

People, didn't your parents ever tell you not to pick up hitchhikers?

With its rich history, Louisiana has no shortage of ghost stories, and this road is no exception. It's said that a rich philanthropist donated money to make City Park, but he had one condition: Build a statue of his daughter Mona, who had just passed away. The park was established and the statue was erected; but unruly teenagers destroyed it during their nighttime visits. Ever since then, drivers traveling along Mona Lisa Drive have reported seeing Mona floating in the air, sometimes scratching on the passenger window and moaning.

More like this
David Tennant’s Transformation In ITV’s 'Litvinenko' Is Astonishing
By Sophie McEvoy
Here’s Your Daily Horoscope for December 7, 2022
By Mecca Woods
13 Gifts From Latina-Owned Businesses For Everyone On Your List
By Marilyn La Jeunesse
69 Great Gifts For Guys No Matter What Their Hobbies Are
By Teresa Newsome, Mia Mercado and Brittany Leitner
Get Even More From Bustle — Sign Up For The Newsletter