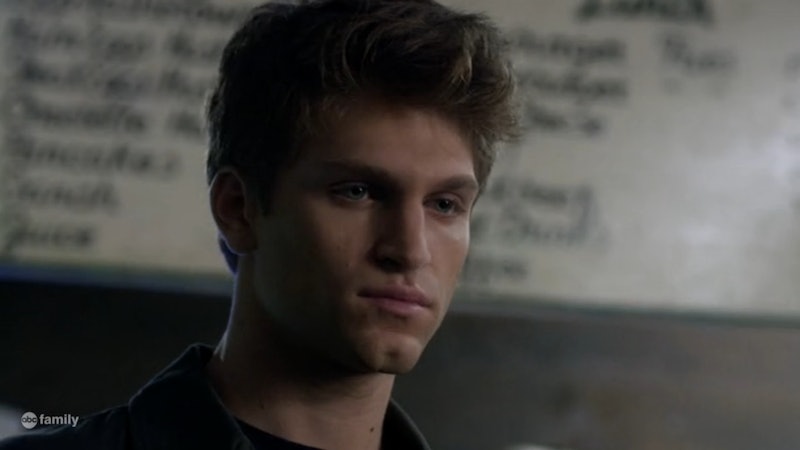 If, thanks to their unbeatable combination of abs and brains, you've been rooting for Pretty Little Liars' Spoby for many a moon, you might have found yourself changing your mind in Season 7. The time jump meant that a few things had changed dramatically since we last visited Rosewood, one of which was that Toby had a highly likable new fiancee. The mechanics of how the show would ever break them up to bring back Toby and Spencer's romance seemed unsolvable — up until the finale episode. Spoilers ahead! Tuesday night's installment saw everyone's favorite PLL boyfriend slumped against the steering wheel. Is Toby really dead? PLL fans will have to wait many months to find out for sure if Toby has died, but if he has, perhaps it's what's necessary for the Spoby storyline to reach any sort of coherent conclusion.

Sure, it'd be controversial, but how else could the show give the former couple real closure? Viewers have already been given a fiancee that we were supposed to like. PLL hasn't been shy about drawing parallels between Yvonne Phillips and Spencer Hastings — like Spencer, Yvonne is smart, hardworking and has an interest in politics. Like Spencer, Yvonne has also had a pregnancy scare. Yet up until the last episode, Toby has always made his stance clear: he had huge feelings for Spencer (big enough to, say, build her a house with his bare hands), but his loyalties were with Yvonne.

In fact, in the finale, Toby was about to move across the country with his fiancee, Spencer wasn't going to see him for a long, long time, so when she demanded a kiss and he remained silent, she went for it. The kiss made me feel a little weird — why had the show been building up Toby and Yvonne as a committed, likable couple if we were supposed to be rooting for Spoby instead? Since we're usually supposed to take the side of the Liars, did that mean we were supposed to be digging infidelity? But when the end of the episode came and fans saw Toby and a person who looked like Yvonne next to him showing no signs of consciousness and wounded in a car crash, the kiss suddenly made sense to me.

Fans couldn't root for Toby and Yvonne to split up, but we also couldn't hope for Spencer and Toby to get back together. And yet, Spencer and Toby were the couple the series has been encouraging us to root for for the first six seasons. The PLL show writers presumably knew that Spencer's newest love interest Cutie McPoliceman (AKA detective whose name I haven't bothered learning because there are way too many minor characters for me to get invested in during this final season) wasn't a valid trade-in for viewers, and so there was no possibility of real closure coming for fans of Spoby — unless one member of the duo died.

If he is truly dead, then, in this context, Toby's kiss with Spencer made sense as exactly as what it was billed as — a sweet, emotional farewell smooch. So don't be mad because Toby cheated on Yvonne and don't be (too) sad that Toby may well have perished at the wheel before he went to live out his new dream life away from Rosewood. After all, how else could Spoby have ended?