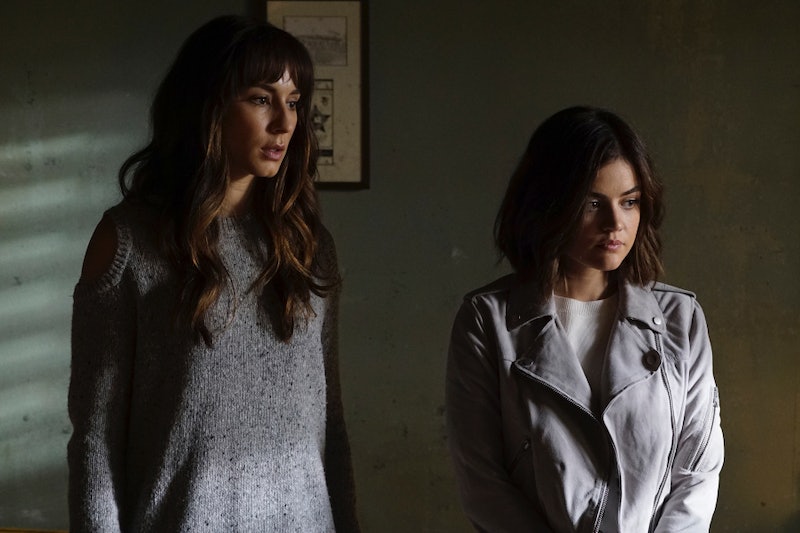 If your head is still reeling from the events that unfolded during the Pretty Little Liars Season 7A finale, then you are not alone in that venture. Seriously, guys, that was a crazy episode for many different reasons, but the one I'm mainly concerned right now is in regards to Spencer's fate on Pretty Little Liars . At the end of Tuesday's episode, we saw her suffer from what looked like a severe gunshot wound, but does that necessarily mean that Spencer will die when PLL returns? I'm hopeful and dare I say optimistic that this Hastings lady will make a full recovery... at least physically.

I say that because I can't mention Spencer's gunshot wound without also bringing up the other bombshell that was dropped on her at pretty much the same exact time. While she lay bleeding on the floor, Mary Drake revealed that Spencer is her daughter. Now, given that this is Mary we're talking about, it's hard to say whether or not she's telling the truth here, but it would be a really random lie to tell at that moment, so I'm tempted to take her word for it, believe it or not. Not just because it would be an interesting twist to the whole Drake/DiLaurentis story, but also because it would be a big incentive to keep Spencer alive.

I mean, let's face it — why would you reveal such a huge aspect of Spencer's life just to have her die before being able to find out more about it? That simply wouldn't make sense. Plus, the quick teaser that aired at the end of the finale showed Spencer being wheeled into the hospital on a stretcher still looking alive. She may have a long and slow recovery ahead of her, but I'm betting she'll be on the mend very soon. Spencer is a survivor. Let's just hope we can say the same for Toby.