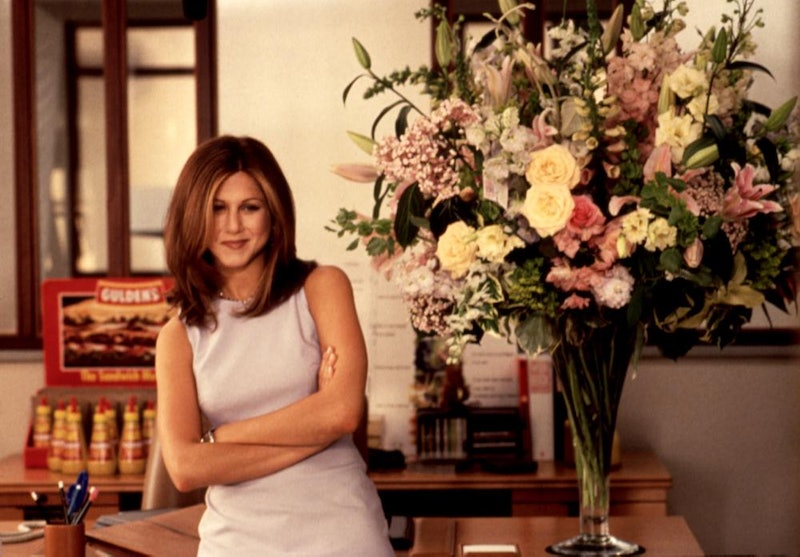 Ah, Picture Perfect. A movie so '90s, it would never stand the test of gender politics in the (slightly) more enlightened era of 2016. If you didn't see this movie when you were a kid (and really, if you didn't, how?), here's a rundown: Jennifer Aniston plays career woman, Kate, who works in advertising and whose boss passes her up for the big promotion because she's... too free, or something? Um, in a romantic sense. Yeah, gross, I know. So, Kate concocts a plan to pretend she's engaged so she can nab said promotion... and obviously, it doesn't work out how she expects. Yes, this movie is everything for all the right/wrong reasons, and definitely worth rewatching if you haven't in a while: These 31 things I noticed while rewatching Picture Perfect myself are proof.

But first, a little appetizer to set us up: In regards to why she comes up with her fiancé plan, we learn early on in the film that Kate's coworker Darcy did Kate a "solid" (I guess) by telling her boss Kate's engaged to someone so that Kate would get the promotion — she even uses a photo of Kate sitting on some random dude's lap as proof. This is literally all her boss needs to believe his New York-based employee has been involved in a secret long distance relationship with a guy in Boston for months, so he promotes her, stat. All's going swell at work, until the aforementioned random dude saves a kid from a fire, and gets really damn famous. Cue: Tons of hijinks, because everyone Kate works with now wants to meet her fiancé.

1. Dating In New York Always Sucked, Even Before Tinder

Her mom sets her up with this dude, who tries to seduce Kate on the first date... without protection. Because, "it feels better" or something? I don't want to yuck this guy's yum, but let's just play safe, kids.

2. This Is What Kate Wears To Work, And Since She Doesn't Work At American Apparel, It Probably Isn't Work-Appropriate Attire

Later in the movie, Kate's boss will make some snarky comment about her sense of style. Normally, I'd vomit at this, and I still think Kate's boss has no right to tell her how to dress. But, on the other hand, this 28-year-old woman is wearing pigtails to her sharp, executive role. Girl, you know better.

3. Also, These Are Her Glasses, And It's Important You See Them Too

I don't know what your feelings are about hipsters, but let's thank them for the eyewear revolution they summoned. Thanks to them, no 20-something NYC-based woman has to wear a pair of specs like these anymore.

4. OK, But Don't Get Too Smug About Living In 2016, Because These Are Her Salary Goals

She tries to chat up the office lothario, and he's like, nope, you're a good girl, not into it. She tries to disagree, but, really who's going to believe her when she's dressed like a young secretary on Mad Men?

I don't know if you've noticed yet, but Kate is single. So single. And don't worry. There'll be plenty more visual clues along the way that Kate is single, in case you forget.

7. Kate's Like "I Want That" But Not In The Way You Think She Means It

Because, like all tragic NYC-based spinsters in '90s rom-coms, Kate is obsessed with her career, so she does not "want that" for the visual reasons, aka the male model. She wants "that" meaning an advertisement she created she be on a billboard in Times Square.

8. Her Mother Runs A Hair Salon Nearby, And This Is Somehow A Sad Thing

Rom-com universe: you so crazy. In reality, if your mom lived close by in New York City and did your hair for free, you'd be like, WIN. But in Picture Perfect, this is just another symptom of child-woman Julia's failure to launch. I don't get it.

9. Jennifer Aniston's Sad-Face In This Movie

Get ready for a kaleidoscope of facial sadness. This is just the first of many.

10. This Is The Guy She's Crushing On

And her mom's like, no pressure, but so much pressure: go lock down a man.

12. But It's A Rom-Com, So Of Course She Gets Seated At A Table With Zero Bachelors

Her table: fun lesbians and nuns. I'd love to sit at this table, Kate's striking me as pretty ungrateful.

She clenches her teeth through the ceremony.

14. Then, Like In A Nightmare, The Wedding Videographer Keeps Shouting "Single Woman Kate" On The Street

IDK, I still don't get this bit. Relevant sidenote: this guy is the hero of our story, his name's Nick.

Harlequin-sexy. Also, green tights. This is a bold look!

16. So Then Everyone Thinks She Has A Fiancé Because Her Friend Lied, And Now Sam Thinks She's So Bad

She's a bad girl, so unavailable, and engaged. So, obviously, now Office Lothario wants to smush his face into hers. Look at those lush manes of hair meeting. How are these two not destined to be A Thing?

But then, her fake fiancée gets front-page newspaper famous. Because, sure.

This guy is dominating all genres of media.

So much sad face.

How can he resist that pout?

Totally not freaked out in any way. Because rom-com.

21. Have You Noticed How Good Kate's Hair Looks Post-Promotion?

You thought you wanted to ascend the career ladder for a healthier bank balance, not healthier hair follicles. You were wrong. Powerful ladies have shampoo-ad perfect hair.

22. So She Has To Have Her First Kiss With Nick In Front Of All Her Colleagues

And it's not awkward at all. Nope, not even a little bit.

23. You Know He's A Keeper Because He Tells Her That Her Mom's Beautiful

Totally acceptable and sweet and not creepy in any film apart from The Graduate.

24. Then, Sam Calls Her For An Illicit Rendezvous, And This Is What She Changes Into

And Nick's like "wow, you look amazing." There you were thinking the '90s were all chokers and velvet minidresses. Nope. Apparently it was a time when comfortable, roomy office-wear was the height of eroticism.

25. And Kevin Bacon's Like "I Can't Deeeeal With You Having A Fiancé"

And Kate is so close to cracking. She's even like "oh, but, I have to tell you something about Nick..."

26. But Like All Rom-Com Heroes, Nick Is Perfect And Arrives In The Nick Of Time

And it's all to save Kate from herself, of course. Enough self-sabotage, lady: If you're going to construct an elaborate, completely fictional storyline about a fiancé, you should probably stick to it.

28. Not That Size Matters, But This Is Nick's Phone

29. At Some Point In The Film, Kate Morphs Into Sarah Michelle Gellar In Cruel Intentions

The intrigue and plotting was too much. It had to happen. Forget Rihanna: Kate is the original good girl gone bad.

31. They Hardly Know Each Other, But It Feels So Right

If I've learnt anything from this movie, it's that there is one and only one route to romantic fulfillment: interrupting your crush at their place of work, while they're trying to do their job, and smushing your mouth into theirs. Cute pizza delivery guy, you better watch out: This is going down next time I order a quattro formaggi.

The title of this movie isn't just about the storyline, but a meta commentary on the film itself: this movie is a work of art, Aniston's Sistine Chapel, and you guys better line it up immediately.