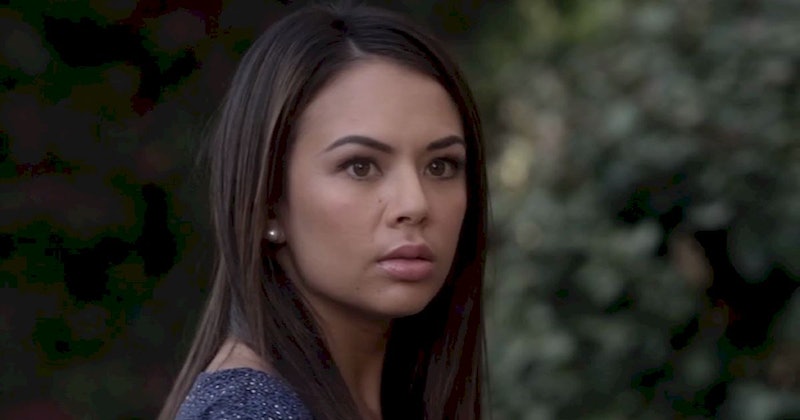 I'm not afraid to admit it: I totally love Mona Vanderwaal, in all of her forms. I loved her when she was a sassy, snarky popular girl with a shoplifting habit in Season 1, I loved her when she was revealed as the Original A, and I even adored her when she decided to turn over a new leaf and give playing on the good side a shot. Mona may have been the Liars' masked enemy once upon a time ago, but in Season 7, she's more friend than foe. Though Mona will always have an agenda, she's trustworthy enough for Hanna to call when she abducted Noel, and for the Liars to rely on when they needed help tying up loose ends after Dr. Rollins' accidental death. The Liars feel like they can trust Mona, even in all her shadiness — but should they? Mona could still be A.D., and it would be a full-circle twist.

I'll be honest: I never suspected that Mona could be A.D., until a friend of mine pointed out why it's possible that I trusted this former villain entirely too much. (Thanks, Courtney.) The concept is pretty simple: Mona has the most motivation to be A.D. out of everyone. This "who is Mary's biological child" stuff? Well, it might actually be a distraction from what's really going on, and that's Mona attempting to finish what she started when she first began the A game.

Right now it seems that A.D. is out for revenge against Charlotte's killer, but there's a chance that the real A.D., the ultimate A, is different from the person who, in Season 6B, was sending hateful emoji texts in order for the Liars to reveal one of themselves as the killer. The person behind those texts could have been Archer, who really did want to find out who Charlotte's killer was. Though we assumed that A.D. was behind those texts, perhaps the reality of the situation is that A.D. only popped up to kidnap Hanna and torture the Liars — because A.D. was also the person who killed Charlotte. If that's the case, Mona definitely fits the bill.

Though Mona hasn't been A for a long time, she hasn't really gotten what she wanted from the A game. Mona claimed to have participated in the game in order to punish the Liars for stealing Hanna away from her, but Mona is still left on the outside of the Liars' friendship. Perhaps Mona did give the game away to Charlotte in order to try and mend her friendship with Hanna, but in the end, Charlotte betrayed Mona by putting her in the dollhouse. The torture she suffered in the dollhouse would be more than enough for Mona to want Charlotte dead, but perhaps what Mona also wanted was an opportunity to play the A game. With Charlotte out of the picture, Mona could officially steal back the game.

Mona's actions in Season 7 could reveal that she's actually the mastermind behind this whole thing. Mona is the one who knew that the Liars had accidentally killed Dr. Rollins, and offered to cover up the crime — which means she's also the one who could have, theoretically, led the cops away from the trail. She also was supposed to be watching Noel Kahn when he got out to go to the PLL death trap in the Season 7A finale — could Mona have orchestrated everything that happened in the house?

Mona may have been a double agent for a long time now, but we'll have to wait until the final 10 episodes of Pretty Little Liars air to see what her real endgame is.

More like this
The ‘Emily In Paris’ Season 3 Release Date Is Here, Plus The First Footage
By Bustle Staff
The ‘You’ Season 4 First Look Shows Joe’s New Identity And Potential Victims
By Bustle Editors
Devi Is Going To Meet A “Smoldering Bad Boy” In ‘Never Have I Ever’ Season 4
By Jack Irvin and Gabrielle Bondi
New ‘Lupin’ Part 3 Teaser Hints That Assane Will “Go Out In Style”
By Brad Witter
Get Even More From Bustle — Sign Up For The Newsletter